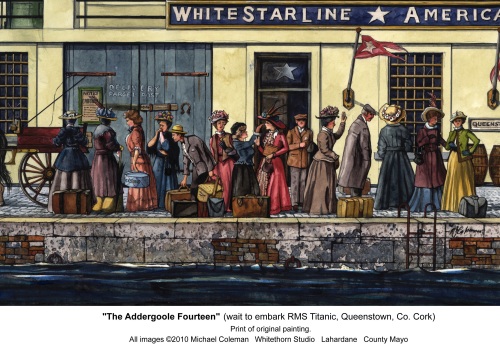 Addergoole – Ireland’s Titanic Village – is so-called because no fewer than 14 friends and neighbours set sail on the Titanic for a new life in America. 11 of these drowned in the freezing Atlantic waters. (See my earlier post here recounting the extraordinarily moving annual commemoration that takes place in this village in the West of Ireland.)

A commemorative plaque is to be unveiled in Castlebar, the main town in County Mayo, from which the emigrants departed by train. The Addergoole community has been instrumental in ensuring that this plaque be in both the Irish and English languages – a further fitting tribute to their kinsfolk, most of whom spoke only Irish when they left their friends and family on that ill-fated journey, a century ago.
The memory of the Addergoole 14 is indeed in the safe hands of the community that has not forgotten them.

Well done, Addergoole!Another fine example of the excellence and dignity with which your community upholds the memory of your people!