The Dandy, The Beano, The Beezer & The Topper – A Lament

The First Edition of The Dandy – from the Daily Telegraph

I read today that the weekly comic,The Dandy, is to cease publication and move to  the ‘e world’. Some of my happiest childhood memories in the 1950’s in County Donegal, Ireland are associated with The Dandy.  Every  Wednesday in the village of Carrigart,  the weekly precious cargo of comics arrived into the local newsagent, owned by Martha Speer. Our weekly order initially consisted of The Dandy and The Beano, with The Beezer and The Topper being added at a later date.

I vividly recall the sense of excitement on Wednesdays as we ran to the shop to collect the order. My favourite was The Beano  with Dennis the Menace and his very destructive catapult, not to mention his fierce looking dog Gnasher. Minnie the Minx, Lord Snooty, Biffo the Bear, Roger the Dodger, and Pansy Potter brought great delight with their (very often anti-social) antics. But my very favourite character was ‘ Little Plum, your redskin chum’. Little Plum was oblivious of the word ‘the’ and instead used ‘um’, and used ‘heap ‘ instead of ‘big’.  I consequently grew up in the certain knowledge that all native Americans  said things like ‘Um heap big fire ‘!!

The Beano Annual – ex libris one of my children

I have a clear recollection of the   time when the ‘header’ to the Little Plum’ page was changed so that the each letter of the title was illustrated with pictures of the little fella in various poses and having a fit of the giggles about it during the nightly family rosary. On another occasion when in bed and ordered to ‘Go to sleep!’ my brother and I engaged in a conversation pretending to be  Little Plum and were roaring with laughter to such an extent that we were threatened  with all sorts of punishments if we did not cease immediately!

The Dandy of course was an equal source of weekly joy – my favourites being Beryl the Peril , and Korky the Cat. Desperate Dan was larger than life with his big square stubbly chin and his diet of cow pies (very often ornamented by a pair of horns, sticking out of the top of the pastry.) gave him enormous strength.  According to an article in The Daily Mail this week, during World War 2 Desperate Dan famously brought down  aircraft of the Luftwaffe with a peashooter! 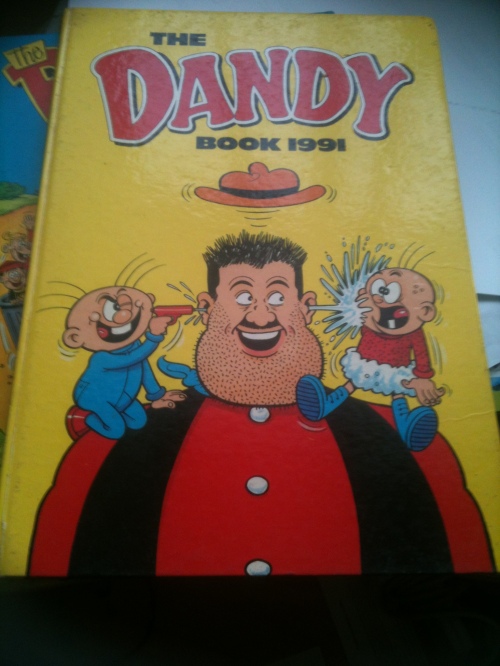 The Dandy Annual – ex libris one of my children

Later we enjoyed The Beezer with Ginger and The Banana Bunch and The Topper with Mickey the Monkey – these two being in a bigger, loose leaf format than the smaller neater Dandy and Beano.

I recall overhearing my well- read mother saying to someone who was wondering if comics were ‘ good for us’, that she didn’t mind what we read so long as we were reading. And of course that is exactly what these comics did  – reinforced and encouraged our reading in those early days when there was very little access to a variety of reading material suitable for children. They also gave us a sense of values – good always prevailed and naughtiness usually resulted in perpetrators being placed in the ‘naughty corner ‘.

My children also enjoyed their weekly comics –  Care Bears and Farthing Wood, Bunty and Jinty, Victor and Hotspur.  I am delighted to say that the tradition has been passed down to  my tiny grandchildren who are loving their comics. Peppa Pig may  horrify some parents with her disobedience, but she attracts the attention of enquiring little minds who are eager to read. Peppa is of course angelic compared to the shenanigans of Dennis the Menace and  his ferocious hound Gnasher and the famously destructive catapult.

The passing of The Dandy into the electronic world is a pity. To think that at one time this publication had a weekly circulation of some 2 million – even at times of extreme deprivation during and after the second world war, the entertainment of children mattered.

Thank you , The Dandy and The Beano and The Beezer and The Topper for the  hours of fun and laughter afforded to this ‘former child’ and  to generations of children who have loved and learned from every page.