Last weekend I was in Dublin for a family occasion and stayed – for the very first time – in the rejuvenated  docklands  at Sir Rogerson’s Quay. I have long wanted to see at first hand the cleverly designed, harp shaped new bridge over the River Liffey …and there it was – right on the doorstep of our hotel! In the quiet traffic free hours of a Sunday morning I took a stroll along this lovely part of the South Bank.

The Samuel Beckett Bridge, having ‘the appearance of a harp lying on its side ‘

The Samuel Beckett Bridge carries both vehicles and pedestrians and is, in my opinion,one of the most beautiful structures in Dublin.

Right alongside the bridge is another stunning structure – the world-class Dublin Convention Centre, with its tilted glass cylinder  beautifully reflected in the  Liffey waters.

The Convention Centre dissected by the stays of the Samuel  Becket Bridge.

A view of Dublin City through the Samuel Beckett Bridge

Looking back towards the City Centre, some of Dublin’s iconic structures are framed by elements of the bridge. The tall building is  Liberty Hall. Built in the 1960s it is renowned for its non pleasing appearance, but is nevertheless an integral part of the Dublin sky-scape. In total contrast, the green dome is atop one of the most beautiful buildings in Dublin, the fabulous Gandon designed  18th century Custom House. The tall spire to the right of the dome is the Monument of Light, otherwise known as The Spire, reaching 121.2 metres into the Dublin sky.This very elegant and modern  stainless steel structure has been part of the Dublin skyline since 2002. 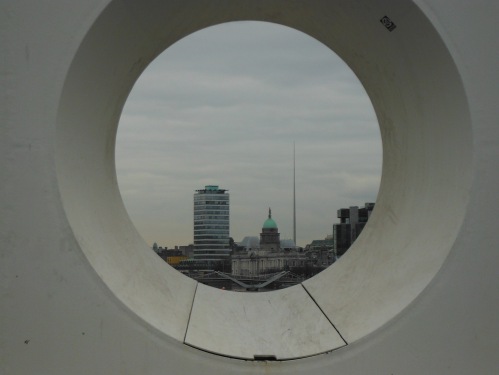 Liberty Hall, The Custom House and The Spire ‘through the eye’ of Samuel Beckett Bridge

Another view of 3 of Dublin’s iconic structures, all on the north side of the River Liffey,  from the Samuel Beckett Bridge. 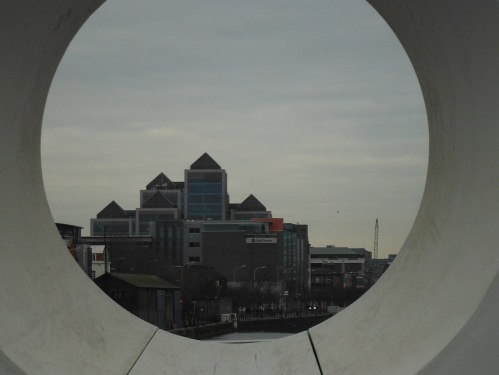 Equally iconic, although a recent addition to the Dublin sky scape, is the glass, multi-roofed building that is  the headquarters of the Ulster Bank. It looks very spectacular at night especially when approaching the city from the north side.

Moored  between Séan O’Casey Bridge and the Samuel Beckett Bridge, with the Custom House in the left background, is the replica famine ship, the Jeanie Johnston. Built about 2002 in County Kerry, she is a replica of the original that sailed between Tralee in County Kerry and North America from  1847 to 1855. The Jeanie Johnston was  remarkable in that no life was ever lost on the difficult voyages between Ireland and the New World. She is open to the public. I boarded her when she was tied up in Fenit, County Kerry, some years ago and she is well worth a visit to see at first hand what the living conditions were like for the emigrants who sailed in her.

A few yards from the Samuel Beckett Bridge, on the seaward side, stands a statue of  Admiral William Brown, or Guillermo Brown as he is known in Argentina. This illustrious Irish emigrant  changed the history of South America. This piece is from the Connaught Telegraph :

”Admiral William Brown, the hero of Garcia, Montevideo and Los Pozos, is acknowledged as ‘the father of Argentina’s Navy.’But he was even more than all that. He was a champion and friend of human liberty and the emancipator of a whole nation. In fact, the entire continent of South America owes him a debt of gratitude that can never be fully repaid. It is scarcely an exaggeration to say that he was one of the world’s foremost and greatest men of action, and that his exploits and heroism have profoundly influenced the course of history.”

Beyond the statue of Admiral Brown, looking seaward there are reminders of the history of the old Dublin Port when ships were once moored along these docks. 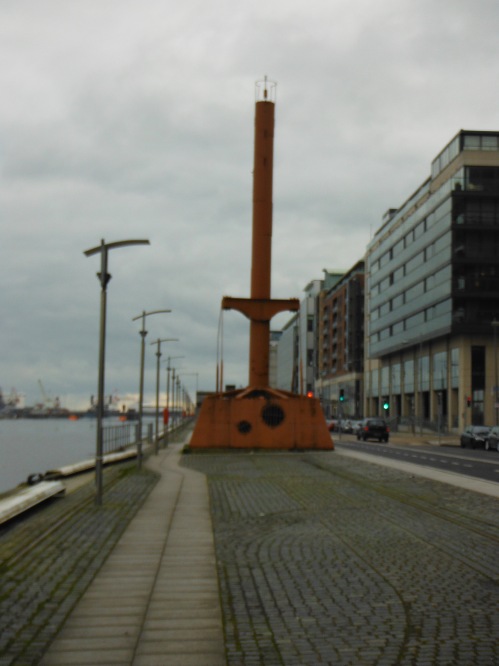 The modern Dublin Port in the distance, with these once busy quays now providing an excellent recreational, commercial and residential amenity.

Reminders of the past are all along the quay wall.

10 responses to “In Dublin’s Fair City”

Leave a Reply to The Silver Voice Cancel reply