Where were you when President Kennedy was shot?

November 22 1963 was just another day – except that it was  a Friday. Friday was a  special day in our school. It was bath night and the following day being Saturday, there would be only a half day of classes, and we would have Tuckshop. With 11 weeks of the term already passed, we would  get home in another 4 weeks, so life was GOOD. Such were the thoughts of  a 15-year-old boarder in the St Louis Convent,Dún Lughaidh, Dundalk, Co Louth, Ireland on that day.

St Louis Convent School. Chapel was on the 2nd Floor of main building

Three years earlier in November 1960, I had sat up all night with my father watching the results of the American Presidential Election. In a Donegal village, we sat into the small hours in front of our small black and white television watching what has turned out to be one of the most famous American election nights in history. It was the first presidential election in which Alaska and Hawaii  would participate, having become the 49th and 50th states the previous year. More importantly from our perspective, thousands of miles to the east of the USA, we were wondering if the charismatic, young , handsome Irish catholic could possibly be elected to the most powerful office in the world. It was riveting viewing with Kennedy’s initial commanding lead being hoovered up by Nixon as the hours passed. I will always remember that moment in the small hours when ‘Kennedy Wins’ came up  on the screen and my Dad’s total delight at the outcome. ‘ I don’t believe it ‘  I don’t believe it’  he exclaimed!

When he got over the initial excitement and disbelief, he explained to me how significant an event this was  – to have a Roman Catholic man, a man of Irish descent, elected to such high office was a great triumph for Catholics and for Ireland. That Kennedy’s paternal great grandfather had left Wexford in famine times and his maternal great grandfather had left Limerick in the 1850s, made the success even more significant. The Irish had ‘arrived’ and the sense of pride was palpable.

A few years later, in June 1963 President John F Kennedy made the first visit of an American President to Ireland. Thousands flocked to see him and his every move was televised (apparently at his own request, as later transpired).  His young age and his good looks made him an instant ‘pop star’ in Ireland where our own President was in his 80s and speaking of ‘maidens dancing at the crossroads’. This was the first time that many of us had actually heard and realized, that an Irish person could be proud of their deprived origins and could succeed. As a consequence, and astonishing as this may seem nowadays, pictures of the revered  and very handsome President  John Fitzgerald Kennedy, sometimes with his wife Jacqueline, were placed on walls in Irish homes alongside religious pictures of the Sacred Heart or of  a favoured Pope.

In this image, two  pictures  of  John F Kennedy hang on the walls of  The Snug in Bradley’s Bar, Barrack Street Cork. The ‘snug’ as seen here was once the living room of the Bradley home and has remained unchanged despite the change of use. There was once a Sacred Heart picture in this room but that was removed when it became a pub.

Another image from Brian MacDomhnaill, whose interest in photographing abandoned houses led to the discovery of this picture of the Kennedys in an abandoned house in County Carlow. Interestingly, this photograph was taken in the deserted home of a  catholic priest.

Five months after the momentous and triumphant visit to Ireland,, on that ordinary November Friday, we boarders in Dundalk were enjoying our 7 pm supper. Supper was generally considered the most enjoyable meal of the day in our convent school, where we seemed to be in an almost permanent state of hunger. We probably had  a bowl of baked beans and lots of bread and not so much butter, but the beauty of beans lay in the fact that butter was not required. After supper, we followed our daily routine of filing out of the refectory in total silence and making our way to the convent chapel for rosary. Along the ‘route’ prefects stood to ensure that silence was maintained, with the head girl standing by the window at the entrance to the chapel.

As I approached the chapel door, Hanna, the head girl, beckoned me over and whispered to me that President Kennedy had been shot. I was reeling and in disbelief as we filed into our chapel seats but thought it was probably not serious.

At the beginning of prayers, it was announced that President Kennedy had in fact been shot dead. Not only that, but the nun said the consequences were potentially catastrophic with the almost total certainty of World War 3. The inference was that President Kennedy was martyred because he was a Roman Catholic and who but Communists would do such a thing. This, we were told, meant that our brothers and male relations would be called upon to fight the Russians, Catholics against Communists.  The Bay of Pigs missile crisis was still fresh in memory and the Communist threat was never far from our thoughts – didn’t we pray several times a day for the ‘conversion of Russia’?

Our school had 90 boarders aged between 12 and 18 – all of us many miles from home, with the only communication being by letter and a weekly telephone call on the one telephone in the school – a treat for those whose family were fortunate enough to have a telephone at home- many did not. As the Rosary began, someone started to cry. Very quickly, another began sobbing and in a matter of minutes total hysteria had gripped the assembled throng. This was undoubtedly brought about by the shock of the terrible news, but in no small measure by the announcement that  we were at war and all our male relatives – fathers, brothers, uncles, would have to stand up and fight and in all probability be killed. I can still hear the shrieks of one or two girls who were totally traumatized, as we were urged to pray and pray and pray.

My memory of that fateful day is frozen in time in that chapel. It did take several days for us to be reassured that all was well  and that perhaps our male family members were safe. Lee Harvey Oswald was arrested shortly after the shooting and he himself was shot dead on Sunday November 24.  On the following Monday afternoon we  got to watch the funeral on the school black and white television.  Images that stand out from the event are of the elegant veiled figure of Mrs Kennedy, her two small children the other Kennedy brothers, and the black riderless horse, with boots reversed, signifying the fallen leader. 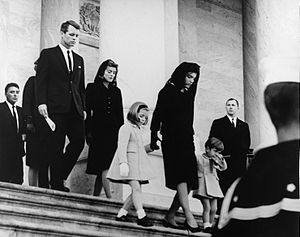 A Guard of Honour of Irish Cadets was in attendance from Ireland at the request of Mrs. Kennedy.

Irish Cadets form a Guard of Honour at the graveside. Image Irish Examiner

Many years later I stood at the simple grave of President John F Kennedy at Arlington Cemetery, overlooking the vista of  Washington D.C.

A simple Eternal Flame burns at his final resting place as a lasting memorial. 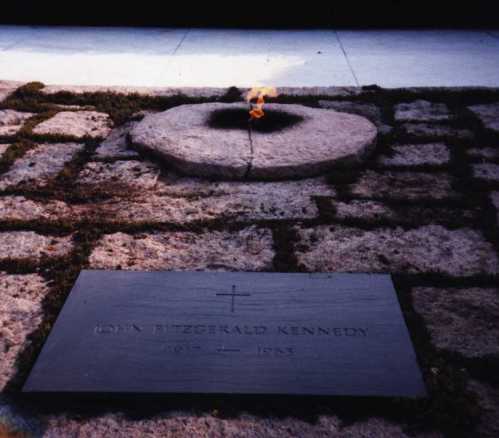 By this time  however questions were being posed about the nature of his Presidential Campaign and his personal behaviour. Although  his personality has been diminished and his image no longer graces the walls of Irish homes, the myth lives on, frozen in time by an assassins bullet on that Friday, a half  a century ago in November 1963.

Do you remember where you were when you heard that news?

I am very grateful to Brian Mac Domhnaill for sending me his photographs of  the pictures of the Kennedys that hung in Irish homes.

23 responses to “Where were you when President Kennedy was shot?”