So..where are the bodies buried?

A  few weeks ago a good friend Chris Goopy, shared a post on Facebook that immediately caught my attention.

It was a story that epitomized all that is  spoken of and celebrated in the Irish character – helpfulness, friendliness and hospitality. The story is set in Roscrea Co Tipperary.

Very few towns in Ireland can boast a castle, friary ruins, a round tower and a high cross, but Roscrea can. Roscrea is a small  pretty town in County Tipperary, that not only has these fantastic links back to her history, but also has very active and obliging members of Ireland Reaching Out.

Ireland Reaching Out  was a government backed concept that captured the imagination as it was genealogy in reverse. The idea was to train local volunteers  at parish level who would make contact with their diaspora with a view to getting them to reconnect with their roots. It was  very succesful in some parishes. Ireland Reaching Out has now teamed up with Ancestry to facilitate training at local level under the title of Reaching Out Together and it is to be hoped that this new partnership will put give a new lease of life to the original concept.

Ireland Reaching Out is however alive and well and thriving in Roscrea – This story was written by Eamon Horan who is  involved with the very active Roscrea Reaching Out and tells  of a search for relatives of a lady from New Mexico and is reproduced here: 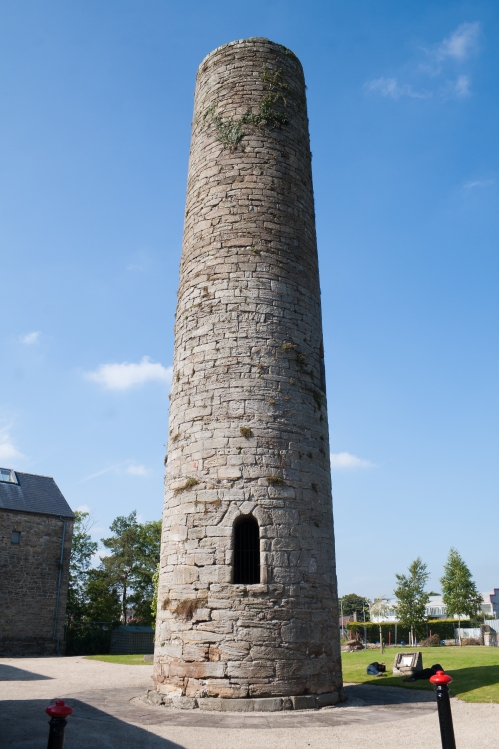 ”So where are the bodies buried?

This story of graveyard searching all started with a letter I received posted from of all places Albuquerque, New Mexico. And yes, it’s along long long way from here to there but the subject matter of the letter was Intriguing and the challange it offered was just what was needed in March morning of 2014. All the training which I had taken over the previous two years with Ireland Reaching Out http://www.irelandxo.com could now be put to good use. Here was a challenge worth the chase.

The letter writer Mary Leonard ( retired nurse ) was coming to Ireland in April with the hope of reuniting with her long lost Irish family specifically her Great Grandmother whose family named Dwane (misspelled on entry to the U.S. as Duane) had lived and worked in the Roscrea region but like millions of others had emigrated to the U.S. in 1846 fleeing, as they were, from the beginning of the worst tragedy in Irish history the Great Hunger (An Gorta Mor). Mary had gathered a lot of information from earlier family stories and writings and was able to lay a good foundation to a potential search and of great help was info that her brother had recorded of his findings on a trip to Roscrea in 1950. He had found two headstones of the family in the Catholic cemetery of Roscrea with the correct family names and dates.

So my search seemed on the face of it to be very simple find those two headstones in the local cemetery and bingo another satisfied customer. Wrong. There is nothing simple about searching for families in the Roscrea group of parishes. Roscrea is divided into two provinces, Munster and Leinster, three Counties,Tipperary, Offaly (King’s) and Laoise (Queen’s) and numerous rural Parishes surrounding the town for many many miles all with their own graveyards. Many many graveyards. However, the notations on the headstones were recorded in 1950 as follows. Erected in memory of Hugh Dwane, born 1826, died 1869 by Mr & Mrs Henry Trench and their son Henry Bloomfield Trench in gratefully remembrances of faithful services from boyhood until death. And beside it the other stone reading erected by Hugh Dwane in memory of his beloved father William Dwane 1848 age 57.

Roscrea the town boasts of 1000 years of history and its cemetery reflect that longevity but I was satisfied by our local undertaker who has a database of local graves was the first point of contact. He assured me that he was not familiar with the name Dwane and to his knowledge there were no Dwanes buried in his domaine. I had a little root around myself but in vain. But as I am Roscrea born and of an advancing age I remembered the name Trench (headstone) was from a bye gone era of Landlords who occupied three large houses, Sopwell (Ballingarry, N.Tipp), Cangort(Shinrone)and Redwood (Lorrha) with large tracts of lands attached. http://www.grantonline.com/grant-family-individuals/places/trench-houses.htm

Further research of the headstone with reference to ‘Bloomfield’ confirmed that the mostly likely big House where Hugh Dwane worked through his lifetime was ” Cangort” in the historic village of Shinrone, Offaly. So my first graveyard search then took me and my brother (search helper) to the old Church of Ireland in which the Barack Obama ancestors are to be found. But no luck. So next step was to call on the local historian Noel McMahon who lives in the village and has two books published on Shinrone. Noel and his wife Margaret are avid gardeners and I was delighted to get a tour of their quite outstanding garden a haven of tranquility. He pointed out that there were pictures of a Dwane Priest and Sister in his books who were most likely related to my search family and he suggested that the ancestors were most likely buried in the ancient Kilcomin Church grounds two miles from the village. http://www.grantonline.com/grant-family-genealogy/Tipperary/Shinrone/shinrone-history.htm a place set apart, home to St.Cuimin who founded his Abbey here in 630 AD.

So a search of the graves followed with great expectations of a find but, alas, no luck. Next day I met Mary Leonard in her Roscrea B&B http://www.slidala.com/ owned and operated by another Shinrone person Marie Warren who was keenly interested in a successful outcome to her guests search. We could not have this guest coming all the way from New Mexico going back home without finding her beloved ancestors. I should add that Mary on arrival immediately set to search the archives of St.Cronan’s Church, Roscrea and the surrounding graveyard herself but here again to no avail.

Next day Mary & I drove to the next most likely Graveyard C of I in the village of Ballingarry, N.Tipperary, burial place of the ‘Trench’ families. Here we diligently searched and searched but hear again no Dwane’s. And so back into the car and off to see the ‘big house’ of Sopwell home to one of Irelands largest Landlord families up until the 1960’ies. On our way I passed a bungalow and noticed two people working on their very beautiful front garden. I stopped reversed and sought advice as to the whereabouts of our elusive Dwane family. What a delightful surprise, it could only happen in beautiful Ireland. Yes, he (John Ryan) was familiar with that surname and seeing as the day was nice and sunny they dropped the gardening put on the wellies and joined us in our search.

John and his very jovial partner joined us in my car and directed us to a very hidden graveyard, Uskane near Borrisokane. But ,alas, no further joy. No Dwans. I was beginning to dispair but Mary was loving the whole Irishness of our tour. But John had an ace card to play and he led us to the house of Michael Delahunt ( Sopwell) whom I now know to be the foremost authority on names of families, burial places and graveyard recordings in N.Tipp. Without his wonderful help given friendly & freely I am afraid our day would have been a failure. Michael evidently has spent his life’s work in researching and recording the graveyards of North Tipp and this all long before the invention of the modern computer. His ‘front room’ is his library of all that has been forgotten in N.Tipp. Michael actually knew the recent family of Dwans and had a detailed knowledge in his memory of where the ancestors were buried he then went on to sketch out on the ground with his walking stick the last known house of the Dwane family in the district just a mile or so from his front gate (now bulldozed). Things were looking up, Mary was getting excited. But wonder of all wonders Michael referred back to his countless journals of grave recordings in his front room and was able to come up with the exact location of the two elusive Headstones of the older Dwane burials. Surprise, surprise. He said, with conviction that we would find those stones where? Back inside the front entrance to ROSCREA’s cemetery 100 yards to the right from the Franciscan Archway.

It was getting late when we arrived back in Roscrea and the search was now in a delicate state of anxiety, would we find the elusive headstones or not. Would Mary go back to Albuquerque, New Mexico empty handed with stories of half crazy Irish people leading Tourists on make believe headstone tours. Well the finale to any good story is, of course, the one with the happy ending and so it was for this search. There within feet of where Michael Delahunt said they would be were the headstones much to Mary Leonard’s delight and to my great relief. And so we adjourned to the local Alehouse to celebrate our good fortune of reuniting Mary with her long lost family. Mary flew home to New Mexico a very happy Lady with stories to tell.

But the story didn’t finish there. A few days after her departure a fellow IROxo enthusiest, Ann DeRoe who lives in Shinrone called to say that she had discovered the modern burial place of the family in Shinrone R.C. graveyard and has a connection to living relatives who possibly live in Portumna. Mary Leonard’s Brother & family are now planning on visiting Ireland and hope to make the connection with living relations after 150 years of seperation. And the lesson to be learned from this story is that Ireland Reaching Out is a really worthwhile concept connecting the Diaspora (all 60 million)back to their roots and hopefully Tourism Ireland will be a major winner in the process. All this in keeping with my earlier career working then in Canada for Air Canada but my heart was always ‘home in old Ireland’ land of wanderers dreamers of exiles but ‘not forgotten people’.” 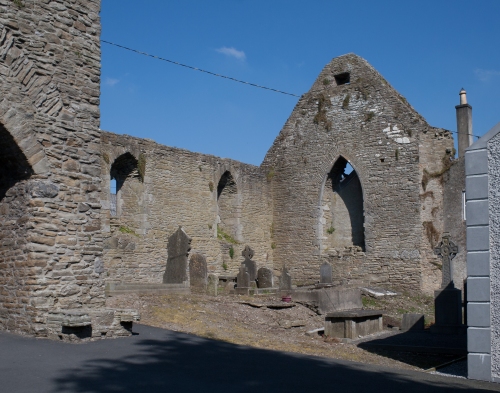 What a heart-warming tale this is and surely one that will inspire many of our diaspora to have a go at tracing their ancestors. Not only that, but a few days earlier I had heard first hand from Janet Maher (mahermatters.com) of  a very similar experience she had in tracing her ancestors in the same general area in recent weeks.

I am grateful to Eamon Horan for giving his permission to reproduce his story here, and to Joe of ‘Roscrea through the ages’, who facilitated contact with him. Thank you both!

Irish Genealogy Toolkit is a free site run by Claire Santry and is an absolute must for anyone tracing Irish Ancestry.

4 responses to “So..where are the bodies buried?”