One of these days: A Winter Solstice Birthday

Newgrange. Aligned with the rising sun whose light floods the chamber on the winter solstice. Image Wikimedia Commons

‘One of these days’ is a phrase that trips off many an Irish tongue and whose meaning is clearly understood as being ‘sometime in the near future’. I was not so sure if this is the case across all the English speaking world, so a quick Google came up with the following: “One of these days” is an idiom that behaves like an adverb. It’s basically a drop-in replacement for “someday,” meaning something like “at some unspecified point in the future”. So there we have it!

‘One of these days’ goes around in my head at this time of year for two reasons, both of which are ingrained in my DNA.

Growing up in North Donegal with its dark star-filled skies meant that we were reasonably familiar with celestial goings-on, especially in winter. We spent many an hour out in the backyard with our mother, identifying the Milky Way, Orion’s Belt, The Plough, and The Seven Sisters as well as the occasional passing comet with its long tail. She would say ‘One of these days now you will see shooting stars if you are good’. Shooting Stars cropped up at reasonably regular times and wowed us as we headed over the barrack-brae towards Carrigart chapel for October Devotions, or to pray for the Holy Souls in November. Or, she might say: ‘One of these days now, you might see the Aurora Borealis’. The very sound of it was magic, that matched the dancing colorful waves in the sky! And so too with the Winter Solstice…’One of these days the sun will have gone as far away as it can go and will turn back to us and the days will begin to lengthen’. In days predating electricity in our houses, with only battery operated wirelesses and newspapers to inform us, we never knew exactly when these events might take place, but we knew when it was ‘one of these days’!

Solstices and equinoxes fall in March, June, September and December, some on the 20th or maybe the 21st or perhaps the 22nd or possibly even the 23rd. Who could possibly keep track of them, and which date referred specifically to which event? Old Moore’s Almanac was stocked in Speer’s shop at Christmastime and brought home. As it contained dates and predictions for the upcoming year, it didn’t help with the exact time of the winter solstice for the current year. And then, by the time we needed to consult it for other celestial events it was lost, probably having been thrown away in disgust when the first prediction of ten feet of snow that would close all schools for the month of January never materialized. So, on ‘one of these days’ we marked these wonderful events in Donegal. On, or around about, the correct dates.

Another event in our house was marked in a similar fashion. It too was a moveable feast, a winter, and December event, but not one we could check up in Old Moore’s Almanac. It was my father’s birthday. I often asked him, ‘what is your birthdate?’ and he said he wasn’t sure. He said his birth certificate said one thing, his baptismal certificate said another and his mother never agreed with either of them. So he spent his entire life being confused about it and confusing all of us around him. ‘Ah, it’s one of these days’, he would say, when all we knew was that it was going to happen in the days coming up to Christmas.

Dad was born in a small house in Templedouglas, Glenswilly, County Donegal in December 1921. He was the first son to my grandparents, James Gallagher a National School teacher in Templedouglas, and my grandmother Mary Friel, a seamstress from Pollaid in Fanad. He was the first brother of my Aunts May and Eileen. My grandfather had been born in Mulnamina, Glenties, so both he and his wife were relative newcomers and blow-ins to Glenswilly. My aunt Eileen had been born here two years earlier, so they had been living in the area for at least two years that we know of. In the days before hospital confinement, home births were the norm. The midwife would have been sent for and kettles of water put on to boil. My aunts often told me that Dad was ‘frail’. I wonder was it a troublesome birth? Was his life in some danger when he was born? Or maybe his mother was very unwell following the birth and everyone was concerned for her welfare. In any event, something gave rise to confusion about his birthdate. If he was at risk, he may have been baptized immediately. Registration may have been delayed. A church baptism may have taken place at a later date, but the norm would have been for baptism within three days of birth. We will never know.

Dad’s birth certificate here before me, states that he was born on December 22,1921. The 1921 Winter Solstice occurred on December 22 at 7 minutes past 9 am. I often wonder if in fact he may have been born just at that time, just right at the solstice? Again, we will never know. 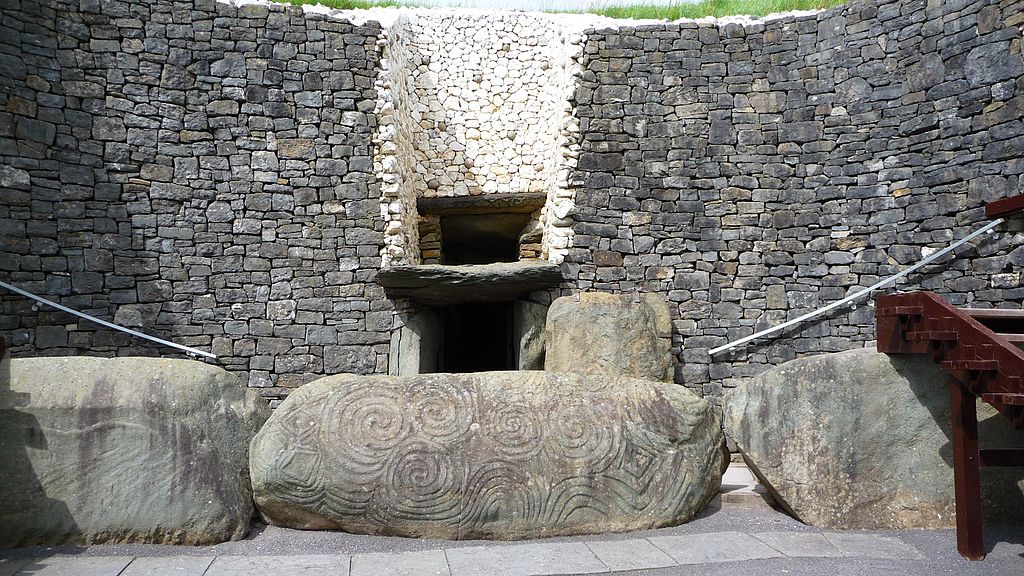 Entrance to Newgrange. It is here that the Winter Solstice sunrise shafts of light enter the passage. Image Wikimedia Commons

At the winter solstice here in Ireland (weather permitting), at the astonishing Newgrange Stone Age Passage Tomb in the Boyne Valley, County Meath, the shafts of solstice sunrise will light up the chamber to mark the turning of the year. Across this island, there are ancient groups of standing stones aligned to capture the rays of light from the winter solstice sun, so this event has been of significance for thousands and thousands of years. How nice to think that Dad was born on ‘one of these days’, at such a significant time in 1921.

Happy Solstice to you all,  and Happy Birthday to Dad!

10 responses to “One of these days: A Winter Solstice Birthday”