Fanad is a peninsula in north Donegal in the northwest of Ireland, lying between the peninsulas of Inishowen and Rosguill, the latter of which is ‘home’ to me. It is where I was brought up, made friends, was schooled and where my family rest. We had many cousins in the Fanad peninsula, just a short drive away. This is where our paternal grandmother was born and grew up. I never knew her, but I did know her extended family, her nieces and nephews. It is always wonderful to return to Fanad; a trip ‘home’ is never complete without a visit to Fanad, first to our grandmother’s grave and then on to Fanad Head and back along the scenic Glenalla Road with spectacular views of Lough Swilly.

In recent years a new bridge across the Mulroy has been opened between the Rosguill and Fanad peninsulas. It is my personal belief that by using the bridge and not driving along Mulroy Bay visitors miss out on much of the beauty of the area. A trip along the Mulroy Loop is well worth the extra short drive of about 30 minutes of beautiful scenery. 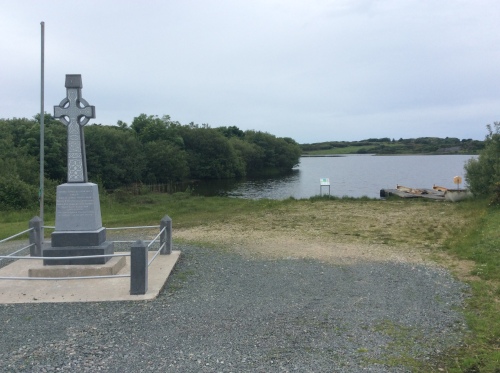 Kindrum. This is a memorial to Fanad men who assassinated the tyrannical landlord, the 3rd Earl of Leitrim, in 1878.

Just a few minutes away on the shores of Mulroy Bay is Massmount Church and graveyard. Immediately inside the gate is our family grave, and a visit here was always the starting point for Fanad visits.

The Celtic Cross on the right beside the shrub is the headstone on the grave of our great grandparents,our grandmother and her sister and brother. Another sister rests in the grave behind and slightly to the left with the white headstone.

The tranquil waters of Mulroy Bay reflect the mood of the weather.

Further along the road and easily missed is a field with some markers where unidentified bodies are buried. Many of them were casualties of  war, washed up along this wild coast over the years. It would be nice to see some sort of simple memorial to them. 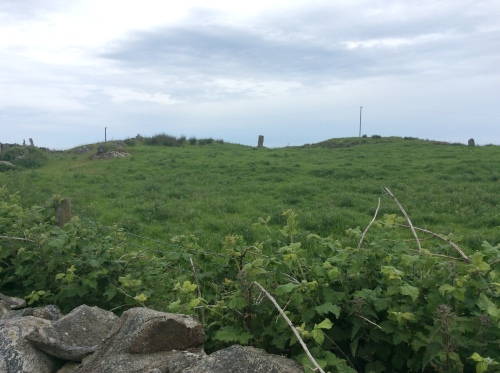 Graves of the unknown, washed up on Fanad shores.

And so it happens. You round a corner and up a hill, and there it is before you – Fanad  Head lighthouse, looking magnificent even on the dullest of days.

As with all key places along the Wild Atlantic Way, there is a sign to confirm that you have arrived! 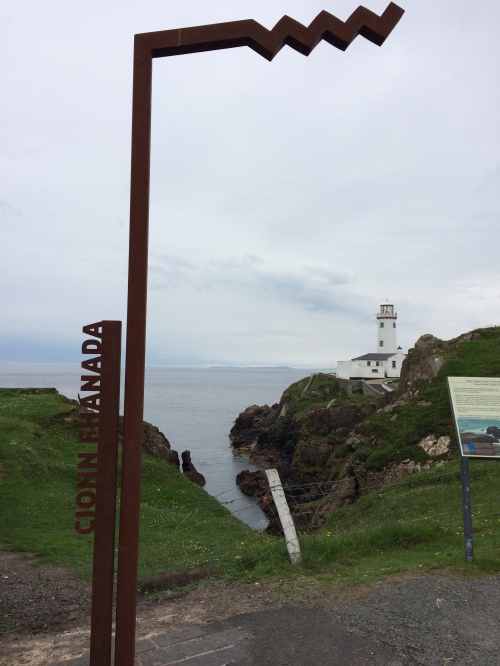 It is billed as one of the world’s most beautiful lighthouses. That’s as may be, but is has a very special place in my heart and that of my family. For many years the husband of my father’s first cousin was the Principal Keeper at Fanad Head and we enjoyed Sunday visits aplenty. 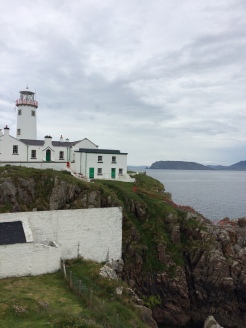 Fanad Head  Lighthouse has recently been opened to the public, so it was with a particularly joyous heart after a gap of about 50 years, that I made my way to buy my ticket and to once again climb the many steps to the top of the lighthouse.

It’s a long way to the top! 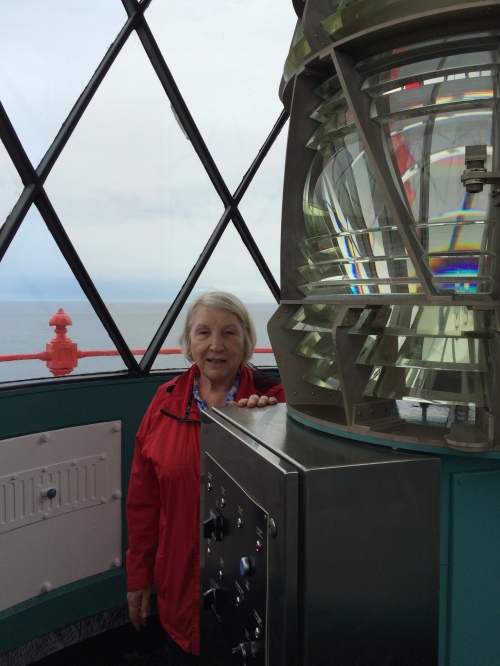 But worth the climb!

While there was no smell of fuel  as I remember it, and the revolving huge lenses have been replaced by more modern technology, it was well worth the challenge to enjoy once again the fabulous if misty views out across Lough Swilly towards Malin Head and back towards Mulroy Bay. On a clearer day it would have been even more breathtaking!

The pier, far below

Looking across towards Malin Head

Looking back towards land.

There are interesting artifacts associated with the life of a lightkeeper and my favourite has to be this chest of books, supplied and regularly replenished  by Carnegie Libraries.

Heading away towards Portsalon I enjoyed a catch up with a cousin before taking the very spectacular Glenalla Road that runs along the cliffs and shores of Lough Swilly. At Ballymastoker Strand is a memorial to the crew of HMS Saldanha shipwrecked in a storm off Fanad Head on 4 December 1811 with 253 aboard. It is thought she went aground on rocks when attempting to make for shelter in Lough Swilly. There were no survivors and for weeks afterwards some 200 or so bodies were washed up on the strand. Some months later a bird was shot about 20 miles away and it turned out to be the ships parrot with a silver collar engraved ”Captain Packenham of His Majesty’s Ship Saldanha”. (Packenham was a brother in -law  to the Duke of Wellington of Waterloo fame). I wonder what happened to the collar!  As a direct result of the loss of the Saldanha plans were drawn up to build a lighthouse at Fanad Head, which was turned on in March 1817. 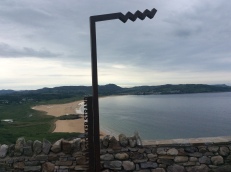 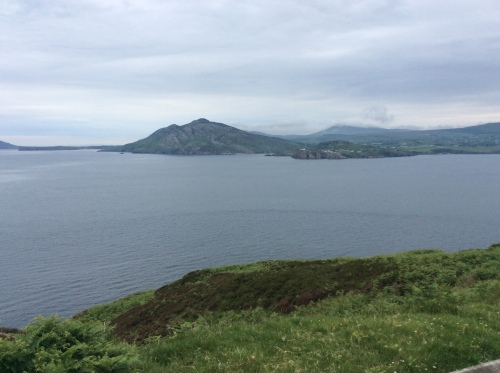 Rathmullan  was my next stop, with its beautiful sandy beach. An annual Regatta used be held here – and probably still is.

Rathmullan has a special place in the history of Ireland as it was from here that the Flight of the Earls took place in 1607. This marked a turning point in Irish history as the Chieftains of some of the leading Gaelic families of Ulster, including the O’Donnells and the O’Neills, left Ireland to seek refuge in Spain, following their defeat by the English at the Battle of Kinsale in 1601.  There is a fabulous sculpture by John Behan on the shorefront in Rathmullan commemorating the departure of the chieftains.  I just love it as it depicts loss, horror, pain and grief in a powerful way.

The sculpture is on the shorefront

I love the raw emotion of this Behan sculpture

You can almost feel the grief, the sorrow 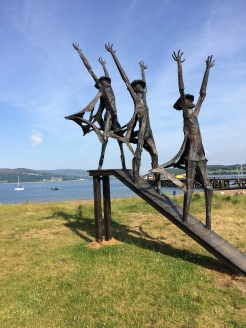 As evening approached the weather cleared up and I was sorely tempted to retrace my steps and to enjoy the scenery that was denied me by the mist over the past two days, but I had to head on, knowing that I would discover more wonders of the Wild Atlantic Way in Inishowen and that I will be back in fabulous Fanad!

During my 18 day trip I stayed in two particularly wonderful Bed & Breakfasts..of 5 star standard. One of these was Bunlin Bay House on Mulroy Bay – a perfect touring base for both the Fanad and Rosguill Peninsulas. Heartily recommended!

10 responses to “Postcards from the Wild Atlantic Way – Fabulous Fanad”