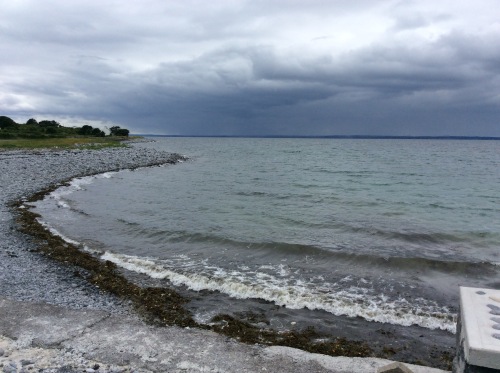 Seamus Heaney was one of Ireland’s best loved poets. His death came suddenly on August 30, 2013, leaving an entire nation bereaved. While his work and his words live on in bookshelves and on bedside tables across the land, he is greatly missed. He had such a way with words and such a mellow speaking voice that I for one could listen to him all day long.

On my recent trip along the Wild Atlantic Way I happened upon The Flaggy Shore in County Clare on the shores of Galway Bay. So here in front of me was a seascape that inspired this great man. On a grey day the leaden sky hung over a silvery sea lapping a silvery grey shore. I could not help but wonder how such a scene could inspire anyone!  And therein is his greatness. I recall reading that Heaney said of his poem about the Flaggy Shore ‘we drove on into this glorious exultation of air and sea and swans.’ The swans were not on the lake beside the shore on the day of my visit but there certainly was an abundance of air and sea!

Perhaps it takes a man of Heaney’s caliber and talent to see such beauty in what could be considered a relatively mundane landscape! Many know of this poem as ‘The Flaggy Shore’ but the correct title is ‘Postscript’.

And some time make the time to drive out west

Into County Clare, along the Flaggy Shore,
In September or October, when the wind
And the light are working off each other
So that the ocean on one side is wild
With foam and glitter, and inland among stones
The surface of a slate-grey lake is lit
By the earthed lightening of flock of swans,
Their feathers roughed and ruffling, white on white

Their fully-grown headstrong-looking heads
Tucked or cresting or busy underwater.
Useless to think you’ll park or capture it

More thoroughly. You are neither here nor there,
A hurry through which known and strange things pass
As big soft buffetings come at the car sideways
And catch the heart off guard and blow it open. – Seamus Heaney

Seamus Heaney, poet, playwright, translator and lecturer, and the recipient of the 1995 Nobel Prize in Literature passed by this Flaggy Shore before me. I am so glad he did. He died three years ago. His legacy lives on.