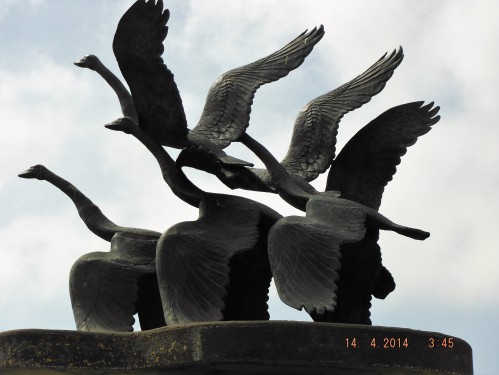 It is still billed as the most daring escape ever undertaken, yet it happened over 140 years ago! Years in the planning, and months in the execution, the rescue of six Irish Fenians from Fremantle’s Convict Establishment remains a breathtaking and exciting story, and has been called the ‘greatest propaganda coup in Fenian history’. Yet I wonder how many Irish people have ever heard of it!

John Boyle O’Reilly (see previous post here) was one of  62 Fenian Political prisoners aboard the Hougoumont, the last ship to transport convicts from England to Australia in 1867. Some 17 of these, like Boyle O’Reilly, were military personnel who were charged with recruiting Fenians from within the ranks of the British army.
During the voyage of the Hougoumont the Fenians produced seven weekly hand written newspapers entitled ‘The Wild Goose: A Collection of Ocean Waifs’. The title of the publication was inspired by ‘The Wild Geese’ a name given to Irish soldiers who had gone into exile and who had served in European armies from the 17th century. 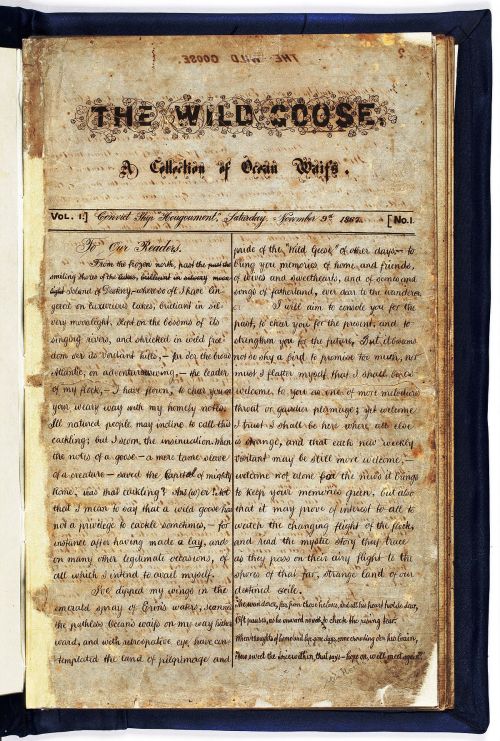 The first page of The Wild Goose, handwritten by Fenian Convicts while being transported to Western Australia. (Image Wikipedia)

Boyle O’Reilly escaped Western Australia in 1869 and went to live in Boston. Over time some of the other convicts were released or given Tickets of Leave, but about 12 of the military convicts were still held. Meanwhile another Fenian John Devoy, a Kildare man, who had been pardoned in England on condition that he go into exile, made his way to America. It was he who received a letter from convict James Wilson, smuggled out of  the Fremantle Establishment, pleading for help to escape.
Boyle O’Reilly and Devoy were instrumental in producing a plan to effect the escape of their comrades still languishing in Western Australia. Devoy attended a Clan na Gael meeting in New York at which he read Wilson’s letter which ended with ‘We think if you forsake us, then we are friendless indeed.‘

Wilson wrote that his was ‘a voice from the tomb,..For is not this a living tomb’ and said they were facing ‘the death of a felon in a British dungeon.‘ Devoy read the letter at a meeting of Clan na Gael and shouted. ‘These men are our brothers!‘ 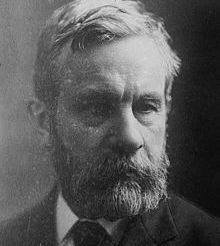 In 1875 with financial assistance from thousands of Irishmen via Clan na Gael (an Irish independence support group) the Catalpa, a three masted whaling bark was purchased for $5,550. The plan was for the ship to appear legitimate and to undertake whaling while making its way to Western Australia. Captain George Smith Anthony, an American sympathetic to the cause of the patriotic Irishmen was the trusted whaling captain who skippered the Catalpa that pulled out of New Bedford, Massachusetts on April 29, 1875.

The Catalpa made her way to the Azores, hunting whales along the way. She dropped off a cargo of whale oil but most of her crew deserted and three got sick. A new crew was recruited. 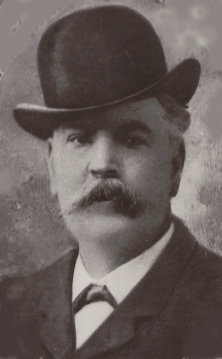 Meanwhile in September 1875, two Fenian agents, John Breslin and Thomas Desmond arrived in Western Australia. Breslin was a native of Drogheda County Louth and already had credentials in assisting escapes as he had sprung James Stephens the leader of the Fenians from Richmond Prison in 1865. Thomas Desmond was born in Cobh County Cork and emigrated to America at the age of 16. He fought on the Union side of the American Civil War after which he became Deputy Sheriff in San Francisco.

In Western Australia Breslin assumed the identity of a wealthy American Businessman, James Collins. He had a letter of introduction that enabled him to become acquainted with the Governor of Western Australia, who very conveniently took him to the Convict Establishment on a guided tour! Desmond found work as a wheelwright and got to know local Irishmen who agreed to help with the plan. The Catalpa voyage took longer than anticipated as she lost a mast in a storm, but she eventually dropped anchor off Bunbury in Western Australia on March 29, 1876.
Captain Anthony and Breslin met and finalized their plans.  The original escape was scheduled for early April but had to be abandoned due to the arrival of customs officials and Royal Navy ships in the area. The event was reset for Easter Monday when most people, including the Establishment Garrison would be distracted by the annual boating regatta on the Swan river.
On Monday morning April 16 1876, the Catalpa was anchored in International waters. Captain Anthony and a crew rowed a whaleboat ashore to Rockingham, about 20 miles from the prison at Fremantle, and there awaited the arrival of the prisoners.
Breslin and Desmond arrived near the prison with horses and wagons and the 6 prisoners who had all been working outside the walls on that day made their escape. The local helpers cut telegraph wires to ensure that word of the escape could not be spread, and the horses took off at breakneck speed for Rockingham pier. On board the wagons were six Fenians
Robert Cranston, Thomas Darragh, Michael Harrington, Thomas Hassett, Martin Hogan and James Wilson. 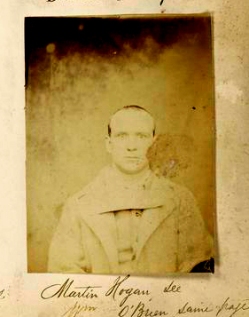 The Fenians made it to the pier where Captain Anthony and his crew were waiting in the whaling boat. Because the Catalpa was so far out at sea, they would have to row for a number of hours to reach it. They were however spotted by a local man who raised the alarm. When they were about a half mile offshore they saw mounted police and trackers arriving on the shore. Soon after they saw a steamer and a coast guard cutter that had been appropriated by the Royal Navy to intercept them. They rowed like mad with the armed authorities chasing them. They could see the Catalpa in the distance but the steamer Georgette was closing on them. Darkness fell and a gale blew up causing crashing waves to almost submerge the boat. Captain Anthony ordered them to start bailing and they kept rowing for their lives. The Georgette was unable to locate them due to the heavy seas and the lack of light.

At first light the Georgette reappeared, headed alongside the Catalpa and demanded to go aboard. The 1st mate refused. The Georgette was running low on fuel and had to return to shore to refuel. Captain Anthony decided to make a run for it to the Catalpa so they rowed with all their might with a cutter in hot pursuit, but they made it and scrambled aboard. Captain Anthony immediately got the Catalpa under sail to get away, but the wind dropped and the Catalpa lay powerless. By the following morning, those on board the becalmed Catalpa were alarmed to see the Georgette with a 12 pound cannon and armed militia pull alongside. The Fenians and crew on the Catalpa armed themselves and stood ready to die.

The Georgette fired a shot across the bow of the Catalpa and ordered them to stop, saying there had escaped prisoners on board. Captain Anthony’s response was that he only had free men on board and the Georgette responded with a threat to fire on the ship. Still becalmed and in danger of drifting back into Australian waters, Captain Anthony pointed to the American Flag and said : ‘This ship is sailing under the American flag and she is on the high seas. If you fire on me, I warn you that you are firing on the American flag’. The wind increased again and Anthony drove his ship towards the Georgette, narrowly missing its rigging!  The Catalpa headed to sea with the Georgette in pursuit but eventually the British retreated and headed back to the coast. The Fenians were free! They arrived back in the USA four months later to a heroes welcome and news of the astonishing rescue was spread worldwide. Devoy, Breslin and Anthony were hailed as heroes

In 2005 a very impressive memorial to these events was unveiled at Rockingham where the Fenians made their escape. The centerpiece of the memorial is 6 bronze Wild Geese flying out to sea to freedom. Perched on a polished local granite base, the Wild Geese Memorial as it is called, can be seen from some distance away on the Rockingham shoreline. 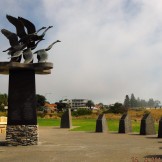 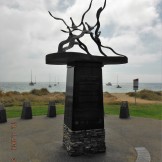 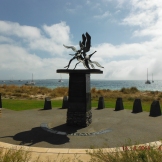 The entire pillar sits on a bed of ballast stones collected from the holds of many ships that transported people to Western Australia. An engraved image and short bio of each of the escapees is etched onto the granite pillar.

In 2014 the memorial was finally completed with the installation of pillars bearing transcribed pages from the onboard newspaper The Wild Goose, including  part of the the image of the actual page shown above. 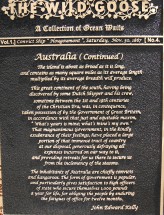 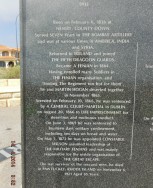 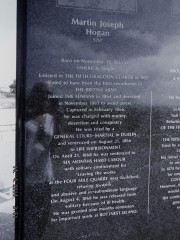 Looking towards Garden Island and the horizon where the Catalpa made her way to freedom. 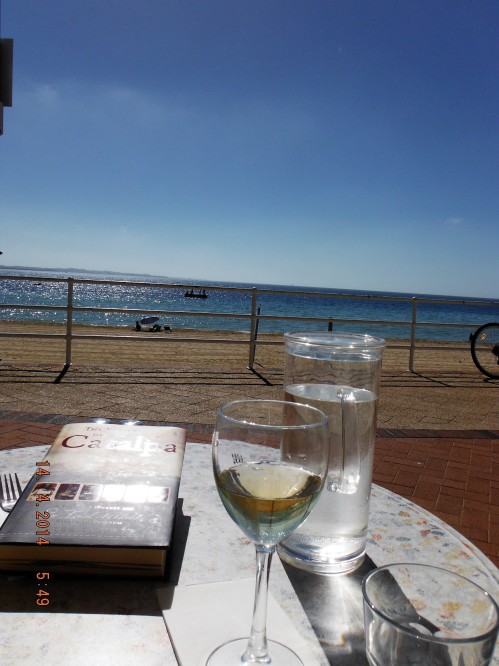 Robert Cranston was a native of  Stewardstown, Co. Tyrone. He served in the 61st British Infantry. Very little is known about Robert after arriving in New York.

Thomas Darragh was a native of Wicklow. He was a Protestant member of an Orange Lodge and had been decorated for bravery in the British Army.

Michael Harrington was from Macroom, Co. Cork and had been decorated for bravery in the British Army.

Thomas Hassett was a native of Doneraile Co. Cork  and had served in the Papal Brigade in Rome. A previous attempted escape from the Fremantle Establishment failed.

Martin Hogan from Limerick deserted the British Army, was captured and tried. He lay in an unmarked paupers grave until 2014 when a marker was erected by the Fenian Memorial Committee of Chicago.

James Wilson was from Newry Co. Down. He served in the British Army in America, India and Syria he deserted in 1865 but was caught and transported. The last survivor of the Catalpa convicts, he died in 1921 at the age of 85.

In this year when we in Ireland recall the Fenian Rising, it is fitting to recall the events that happened beyond our shores for the same cause.

So come you screw warders and jailers

Take care of the rest of your Fenians

Or the Yankees will steal them away

‘The Voyage of the Catalpa: A perilous journey and six Irish Rebels’ escape to freedom’ by Peter Stevens. 2003 Weidenfeld & Nicolson History