Saluting our cousin – another family septuagenarian

This week we mark another ‘big birthday’ in our generation of our family, as our first cousin joins our elder brother on becoming a septuagenarian.  See the post to mark our first septuagenarian here

On July 26, 1947, Hugo Gerard Coyle was born in Carrigart, County Donegal to our aunt Eileen Gallagher and Hugh Coyle. Our aunt Eileen lived in our family home at the top of the street following her marriage to Hugh Coyle from Milford, which  was the next village about 10 miles away.

Their first baby, Mary Patricia was born July 15 1946 but sadly died in September 1946, so the arrival of a bonnie healthy wee boy in July 1947 would have been greeted with great joy. At that time our brother was 5 months old and I was expected the following March. Living in our house at that time were our father Gerard Gallagher and our mother who were married in January 1946, my brother- the 5 month old – our uncles Sean and Jim, in addition to our Aunt Eileen and her little family.  I often wonder  about the logistics of such a complicated arrangement given that the house had two bedrooms, one of which was accessed through the main bedroom, plus a small box room located off the upstairs sitting room. Still, it seems to have worked ok.

For some reason, lost in the mists of time, Hugo Gerard was known as Logie in our house, and that name followed him throughout our childhood. In later years he himself dropped the Hugo part and is very happy now to be known as  Gerry.  He was of course named after his own father Hugh and our father Gerard, so that was no bad thing! 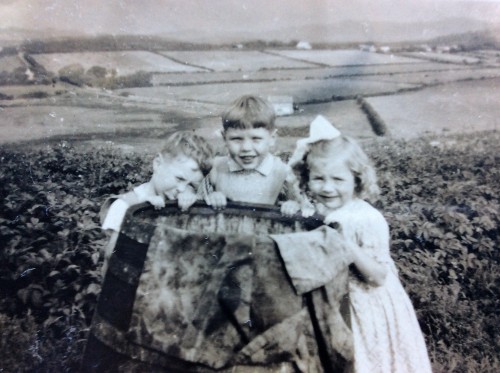 Cousin Gerry (known as Logie), brother and myself in a field of potatoes at the top of Figart, looking towards Tirlaughan. I think the barrel had blue limestone in it for prevention of blight on the potatoes.

Aunt Eileen (who was also my godmother) and Hugh lived with us for a while. Hugh worked in both the Rainbow Bar and the Drambuie Bar in Letterkenny, before moving to Derry and ultimately to Glasgow. But they came ‘home’ every year without fail for summer holidays during the Glasgow Fair, and so it was that this cousin was more of a brother than a cousin. The annual visit home was a much anticipated event and we enjoyed great summers with trips to the shore on what always seemed to be long hot summers! 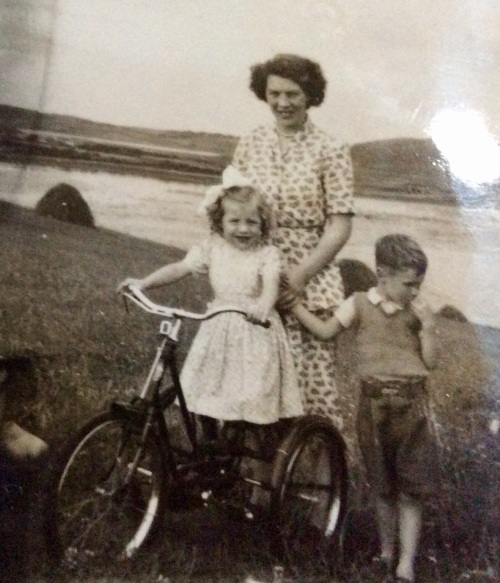 We loved when they came as Aunt Eileen would take all us children off to Tramore for the day, marching us barefoot over the soft velvety grass of the Carrigart Golf Course and on into the prickly grass and bent of the sandy hills with rabbits and rabbit holes and rabbit droppings and exquisite little plants such as miniature broom and baby pansies and teeny roses. We raced ahead to the huge sand dunes so we could climb and slide and roll and laugh before heading on to the shore with our flagons of Cidona, sandwiches in greasproof- paper bags, and with packets of Kimberley biscuits to sustain us.

Gerry, Hugh, Cathy and Aunt Eileen ( always known as ‘Di’ in our house)

Hugh had family in Milford ( brother Paddy, sister Kathleen and possibly another sister), Letterkenny (Tony) and in Downings (Nellie Birney)  and we would feel thoroughly deprived when they would catch the Swilly Bus to visit the Coyle family members. But we did have some great outings to the huge beach at Tramore! One in particular stands out. After the sandwiches and biscuits  were eaten Logie decided that it was a good idea to  catch a frog that was minding its own business on the rocks. He put it into a sandwich bag and we had mighty craic watching our jumping brown paper bag!  The dear aunt however was not amused and in total disgust, bundled us up to head back home across the sandy hills. The bagged frog came too! She harangued Logie to no avail for the entire hike until the unfortunate animal was finally released (unharmed) on the Lee where it disappeared down a rabbit hole.

A  Sunday outing to visit relations in Fanad. Logie,our younger brothers, Paddy Vaughan next door neighbour and driver of Pat Gallagher’s big Dodge car, and our dad Gerard Gallagher. This was taken in 1965

Sometimes he came alone to Carrigart ahead of the others. There was one memorable occasion when he stood on a piece of glass when we were paddling on the shore and nothing would convince him that he was not going to contract gangrene and die. I think our mother may have brought him to his senses as she railed him for having every towel in the house destroyed with blood! He quickly forgot about the gangrene!

I was delighted to be interviewed by the Irish Independent journalist Kim Bielenberg last week for his feature on Jobs for the over 65s. My input was on the far-reaching effects of mandatory retirement at age 65 and how it affected me.

The full article can be read here.