On a recent flying visit to Limerick to attend an event in the Limerick Literary Festival, I enjoyed a short but fascinating walk from the car park to the venue at the City Art Gallery in Pery Square. 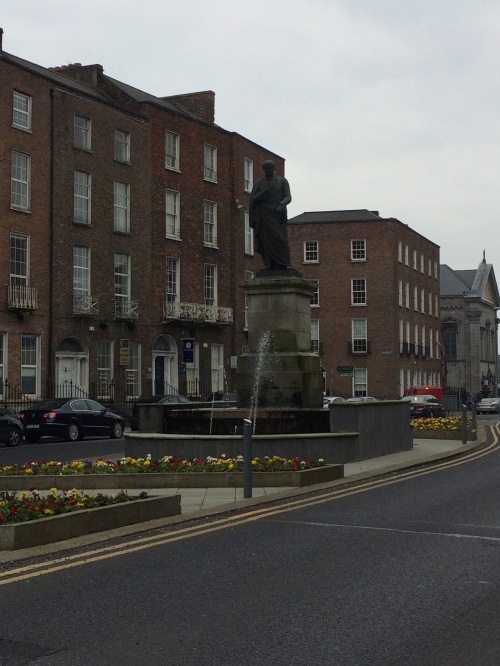 Daniel O’Connell, (1775-1847), born in County Kerry, was a barrister and a politician who  campaigned for Catholic Emancipation. Many main thoroughfares in Ireland are named after him, for example in Dublin, Ennis Co. Clare, Sligo and of course Limerick. The O’Connell Monument in Limerick dominates the area known as The Crescent, where it rises from a water feature. (Beloved of pranksters who like to add washing up liquid from time to time to create copious quantities of suds). This figure of Daniel O ‘Connell was erected in 1857 and was the first outdoor public statue of the Irish hero.

I walked along Hartstonge Street and have often wondered how it got the name. Well it seems that Sir Henry Hartstonge, 3rd Baronet (1725-1787) was a Member of the Irish Parliament for Limerick County. He was born in Bruff, Co Limerick and married into the Pery family.

One of the most impressive buildings in Hartstonge Street is The Leamy School, built between 1841 and 1845 from a fund set up by Willam Leamy as can be seen on the plaque below. The bequest was for the education of poor Protestant boys but by 1880 it had become a National School for Catholic boys. 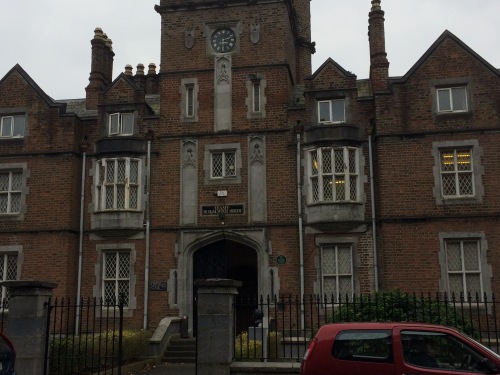 The school closed in 1953. Frank McCourt, (1930-2009) the Irish-American writer, attended this school for a short time in the 1940s. Frank McCourt won a Pullitzer Prize for his book, Angela’s Ashes a memoir of his early life, part of which was spent in Limerick. The Frank McCourt Museum is housed in this building, where there is a bust of him near the entrance. 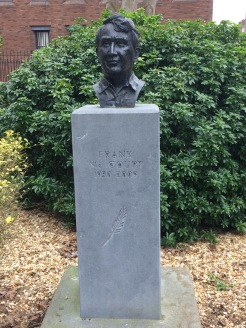 Bust of the author Frank McCourt

The old school with the words ‘National School’ in Irish in Gaelic script above the entrance.

Next to the school is a tall building known as Oznam House which is occupied by the Charity, the St. Vincent de Paul Society. This was once the home of Joseph O’Mara (1864-1927) a tenor of international fame who was granted the freedom of the city in 1908.

Of later vintage, built c.1920, is the Mechanics Institute, with various trade plaques on the buidling. 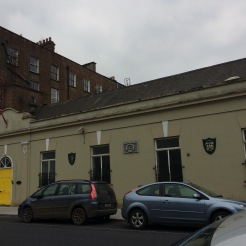 On the opposite side of the street, in a totally different style, is the former Aras Fhianna Fáil building dating from c. 1900 with more old Gaelic script – the Irish words for the Fianna Fail Centre. 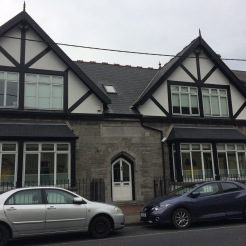 And so we arrive in Pery Square, so named after the politician Edmund Sexton Pery. In fact it doesn’t seem to be a square at all, but it does have some fine buildings. The terrace of six Georgian houses, known as the Pery Square Tontine* Buildings, was constructed  c.1835 – 1838 and is one of the finest examples of Georgian architecture in Ireland. Four of the houses have entrances at the front, while Numbers 1 and 6 have entrances at the gable ends of the terrace. 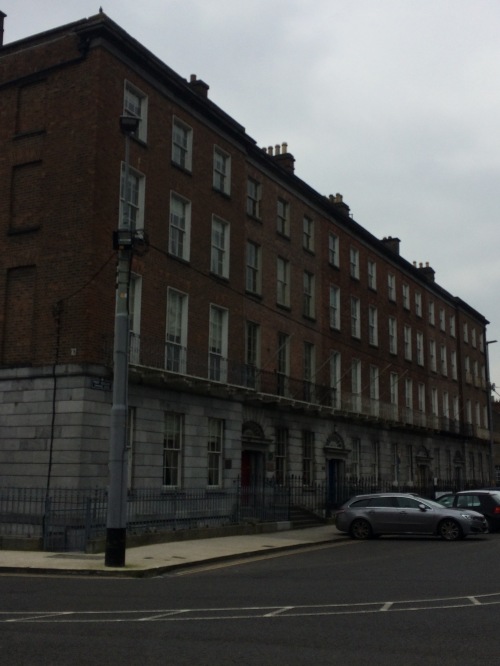 Georgian buildings are so very recognizable by their magnificent front doors.

The house with the red door is Number 2 Pery Square which was lovingly restored. The house and gardens were to become a Georgian Museum. Unfortunately it is only used for special events, but it would be nice to think that tourists could access this wonderful part of Limerick heritage more freely at some point in the future. 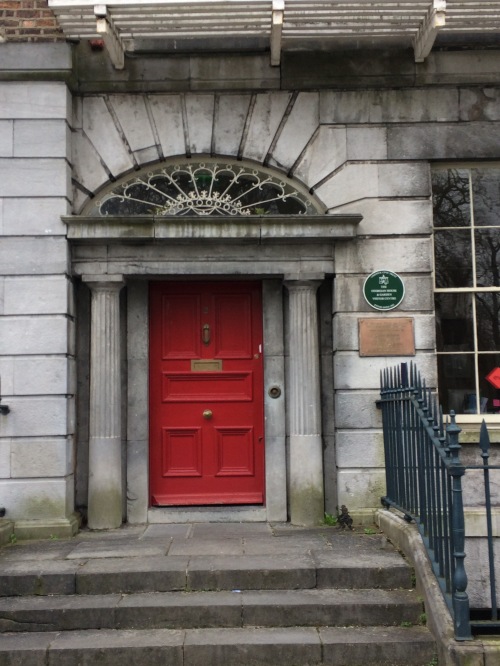 This writer has to declare an interest as in 1998 a certain young student archaeologist was asked to undertake an exploration of the gardens and spent many happy weeks discovering paths and exploring a privy on the site. As so often happens, his name in the literature is phonetic rather than accurate, but we know who he is. 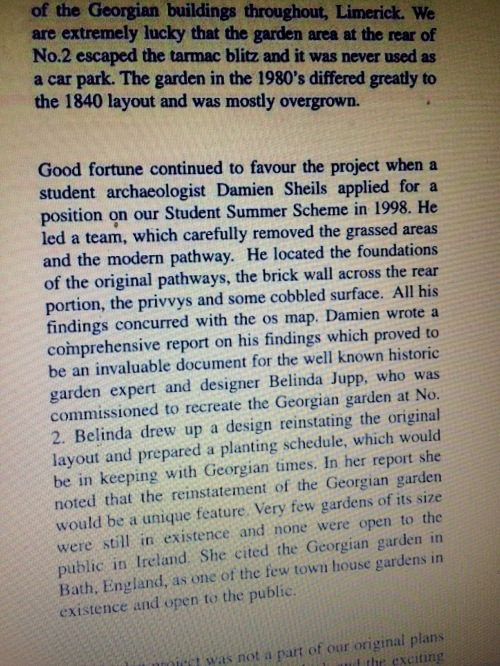 This boot scraper is typical at entrances to Georgian Houses – every country home should have one!

While Number 1 Pery Square is now a delightful boutique hotel, the other houses in the block seem to be in commercial use.  The magnificent street has a church at each end. This is St Michael’s Church of Ireland c.1984  at the southern end, with beautiful wrought ironwork on the outside.

Detail from the gates at St Michael’s. Such beautiful metalwork!

On the opposite end of the streetscape is the Catholic Dominican Church of St Saviours, erected c.1815 and reworked between 1860 and 1870 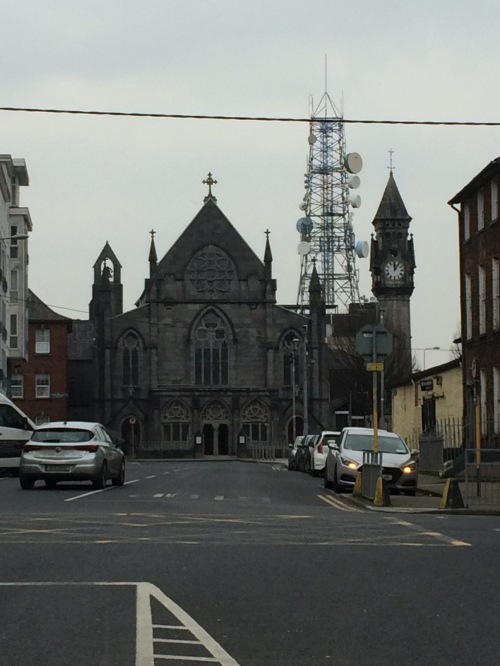 To the right of St Saviour’s is the 65 foot tall Tait Memorial Clock erected in 1867.  It pays tribute to Alderman Peter Tait the Scottish entrepreneur who owned the nearby Tait factory, which supplied the British Empire with military uniforms. When 50,000 caps, greatcoats, jackets, trousers, shirts, blankets, boots, stockings and haversacks were ordered by the Confederate government fighting in the American Civil War, Tait had to navigate the Confederate blockade to deliver his goods. Peter Tait was also Mayor of Limerick between 1866-68. The memorial clock was raised by public subscription.

The street also has two memorials. The Celtic Cross Memorial commemorates deceased members of the Irish Defence Forces and the War Memorial commemorates thousands of Limerick  men who lost their lives in the First and Second World Wars. This latter memorial was first raised after the First World War in the 1920s but was blown up in the 1950s. When the replacement was erected in the 1960s it included Limerick men lost in in WW2. 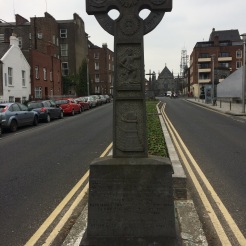 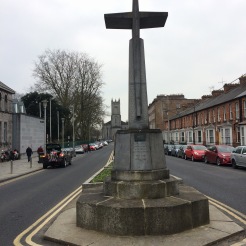 Overseeing the entire scene is the lofty memorial to Thomas Spring Rice (1790 – 1866), son in law of Pery.  He was from Mount Trenchard in Foynes an had the title Lord Monteagle of Brandon. This monument was erected in 1829 on a raised mound in the People’s Park, which was formerly Pery Square. He was the Member of Parliament for Limerick from 1820 to 1832 and was held in some esteem by his tenants mainly due to his benevolence during the Famine years. 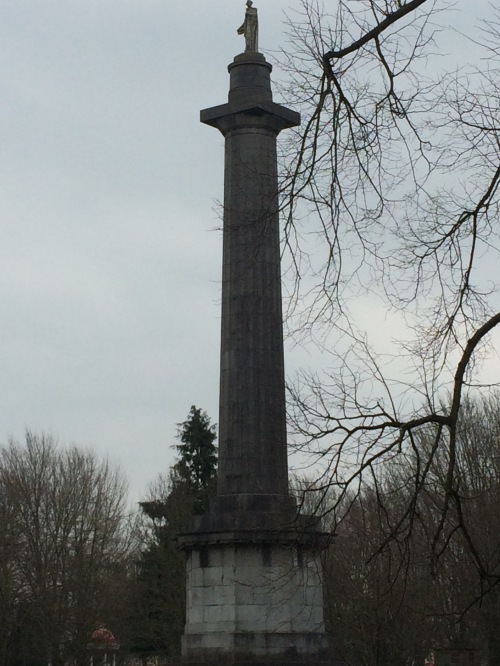 Apart from Spring Rice, the most eye catching item in the People’s Park is the very colourful recently restored fountain. 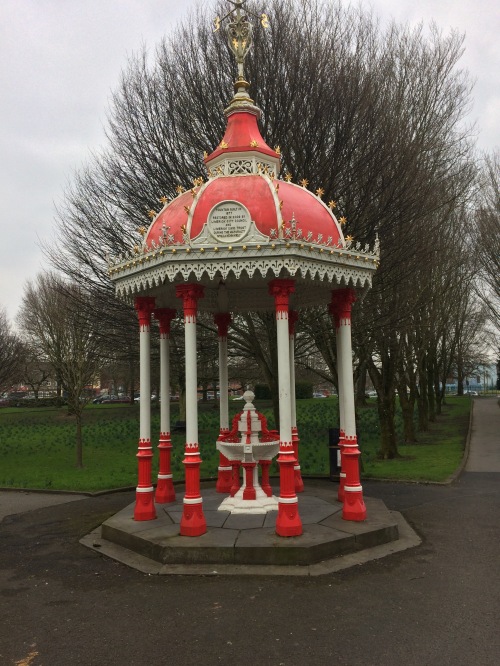 The ornate and restored fountain

Built in 1877, the 2009 restoration is another example of the excellent work of Limerick Civic Trust and Limerick Council. 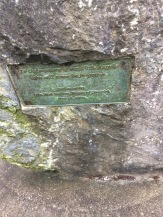 This Children’s Remembrance Memorial with little footsteps in bronze is in a memorial garden to the ‘Little Angels’ of Limerick, opened in 2002.

The main entrance to the park is dedicated to Richard Russell, a prominent local businessman in whose honour the park was opened in 1877.

Just next to the main entrance is the Limerick City Gallery of Art, my destination on this occasion. Dating from 1906 it was the Carnegie Library, one of 2,509 built with money from the philanthropist Andrew Carnegie.

I loved these little figures clinging on to the building.

The little people of the City Art Gallery 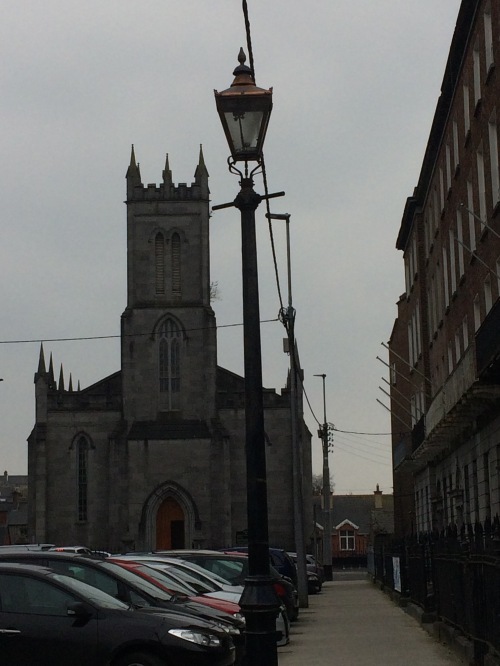 The only surviving gas light in Limerick city

This image of St Michael’s with the Tontine block at the right,shows the last remaining gas lamp in existence in Limerick. From the 1820s and up to 1902, the gaslighter with his ladder would go from lamp to lamp lighting each one and would return each morning to extinguish them. A perfect discovery to end my spare 15 minutes in this part of Limerick.

It’s amazing what you  can find in no more that 250 paces!

*  ‘Tontine’ defined by Oxford English Dictionary as: An annuity shared by subscribers to a loan or common fund, the shares increasing as subscribers die until the last survivor enjoys the whole income.

Publication by Limerick Civic Trust on opening of No.2 Pery Square

8 responses to “Postcards from Limerick City – Around Pery Square”