Christmas Cards are said to have originated in 19th Century England when Henry Cole, who later became the first director of  London’s Victoria & Albert Museum, and his friend John Horsley designed the first one in 1843.  It had two outer panels showing the better-off bestowing gifts on the poor,  and a large central panel portraying a family  partaking of Christmas fayre. (Even the children enjoy quaffing the mead by the look of it!) 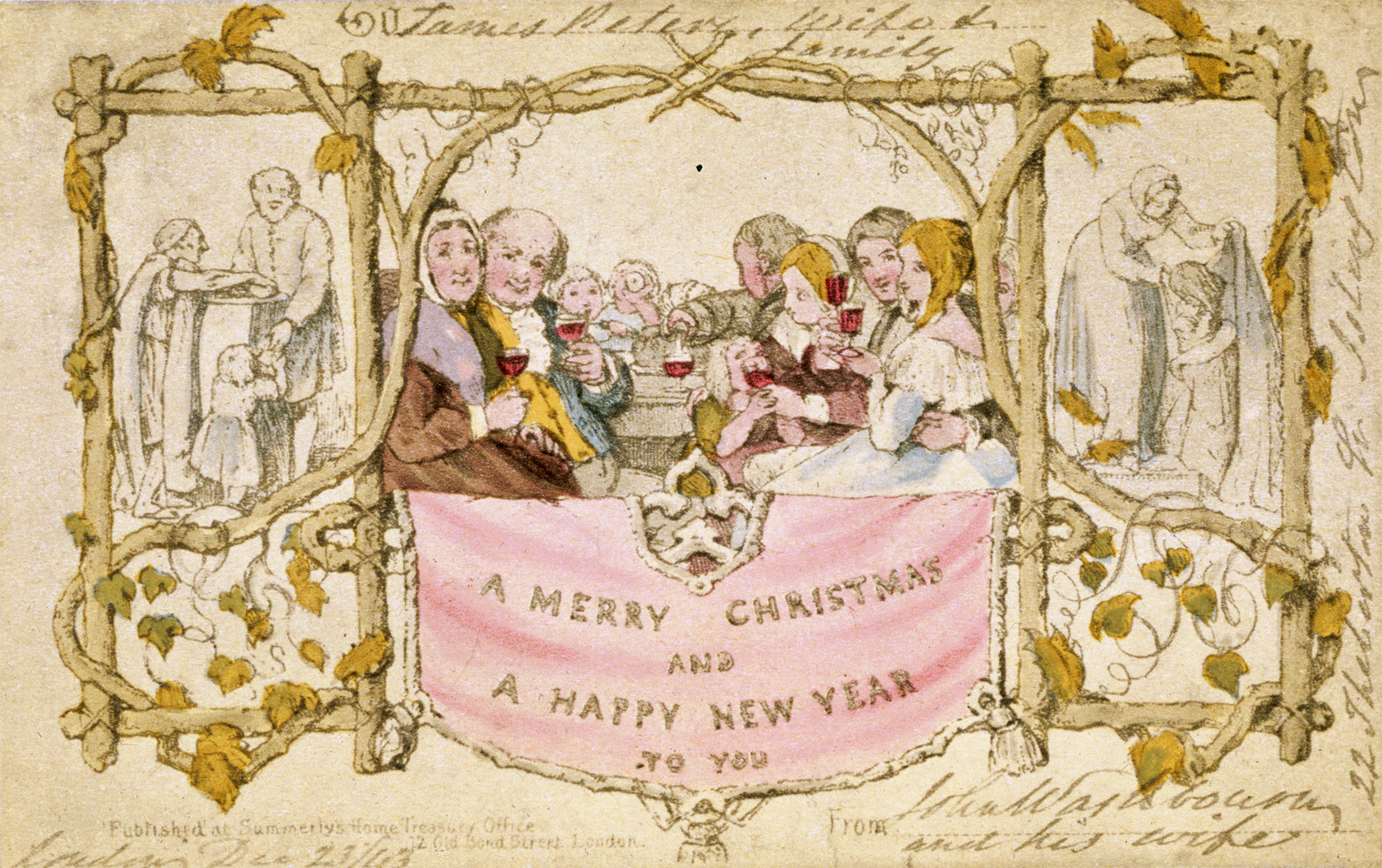 By the 1880s the practice of sending Christmas cards had risen in popularity. The introduction of cheaper postage and development of printing technology meant that cards and postage were within the financial reach of many.  In the USA Yale anthropologist Micaela di Leonardo shows that the practice thrived amid postwar industrialization and the demise of the family farm. ‘‘As people dispersed geographically, women assumed responsibility for “the work of kinship” and became caretakers of extended family connections. Christmas cards were a convenient way for them to nurture relationships among their husbands, children, and distant relatives.”

Meanwhile a German immigrant to the United States, Louis Prange produced affordable cards for the mass market and then in 1915, John C. Hall and two of his brothers created Hallmark Cards, who are still one of the biggest card makers today.

In recent years the Christmas tradition of sending greeting cards appears to be succumbing to the instant and free communication platforms of social media.  I can recall having a list of 120 or so to write and dispatch perhaps 5 years ago.  It was an ‘excuse’ to greet those who had touched our lives, yet who were no longer in our immediate circle.  It was lovely to hear from them and to know all was well. Now, however,  the cost of postage has become a major consideration, while at the same time the cost of cards continues to decrease with 3 for 2 offers.  We can now purchase Christmas cards for charitable causes dear to our hearts, such as for dogs for the disabled, cancer charities, the homeless and so on, yet in spite of the reduction in the cost of cards, the increased cost of postage has become an issue in continuing the tradition. Who doesn’t love to receive a handwritten envelope containing good wishes?  Christmas cards lined up on the mantel are as much a part of Christmas as the Christmas dinner, but more than that, they are a link with friends and family who and may be far away and may be treasure for family historians.

Two of my most valued possessions are ‘last’ Christmas cards from both of our grandfathers.

For as long as I could remember we each received an individually addressed Christmas card from our maternal grandfather, Gaga Clinton.  He had beautiful handwriting that we recognized so well and inside each card was an eagerly awaited fortune – a Postal Order for ten shillings.

Our Gaga Clinton dropped dead in his kitchen on Saturday December 19, 1959. He had posted the Christmas cards that morning so their arrival at our house in the following week was particularly poignant.

This card was the one sent to our mother by her father  59 years ago and it has become a family treasure.

Christmas wishes in the 1959 card

Unfortunately the wishes in the card went unrealized as the sorrow of our grandfather’s passing cast a huge cloud on our Christmas.

Memorial card for our Gaga Clinton

Many years earlier 74 years ago, during the second World War our paternal grandfather posted a Christmas card from Ireland to his eldest daughter, our Aunt May, who was a nun in England.  The card, from Christmas 1943,  was particularly sombre.

Front of the 1943 Christmas card

The message was particularly apt for the time.

When our Aunt May died in May 2007, this card was found in her prayer book. Her much loved father died unexpectedly in November 1944, at the age of 59, having contracted Typhoid Fever, so this was the last Christmas card she ever received from him. She must have had the habit of saving Christmas cards for a year, which in this case paid off as she would never receive another.

Christmas cards have a special place in our family history and I have the last cards written to me by my mother and by my father as well as those from aunts. They give a unique insight into the times that were in it, and they are greatly treasured. I for one regret the demise of the personal Christmas card, a card chosen, written, addressed and posted by those who cared about us.  A loss to family history for sure.

The Female World of Cards and Holidays: Women, Families, and the Work of Kinship.  Micaela Di Leonardo University of Chicago Press