God, she struck me till she tired of it

“God, she struck me till she tired of it”  These were the words of Hannah Herrity, describing one of the many beatings administered by her father’s second wife. 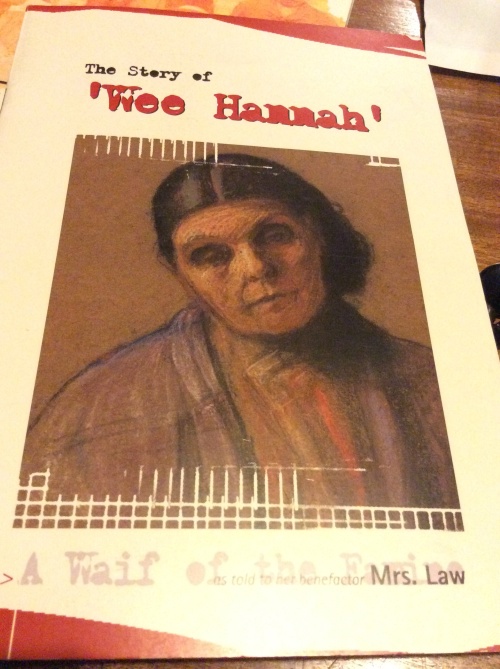 The story of Hannah Herrity, produced by Dunfanaghy Workhouse

Hannah Herrity lived through the hunger and deprivations of the Famine in Ireland. She told  her life story to a Mrs Law who befriended her and who wrote her story exactly as Hannah recounted it. These oral history manuscripts recording  the life of  “Wee” Hannah as she is known, now form the basis of a  permanent exhibition in the Dunfanaghy Heritage Centre, located in the old Dunfanaghy Workhouse, County Donegal. 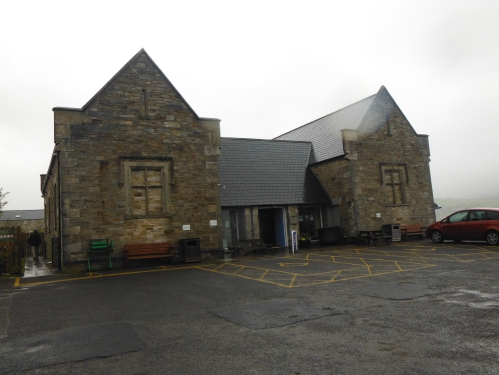 Hannah Herrity was born in Derryreel, just outside Falcarragh, County Donegal, Ireland in 1835 or 1836. She was the eldest child of a local travelling tailorman and his wife Susy. In the early years of the Famine (probably 1847 or 1848) Susy died in childbirth with her 5th child. Hannah describes how her poor mother suffered and tells of her being laid out with the newborn baby beside her and how she felt her father’s tears of sorrow falling on her hair and face…Hannah would have been about 9 or 10  years of age.

Hannah’s father married a neighbour girl to care for the four surviving children, but as Wee Hannah recounted,”God help us, it was the black day for us he took her”. She was subjected to many beatings – neighbours would rescue her and allow her to stay at their home, safe from the enraged stepmother. 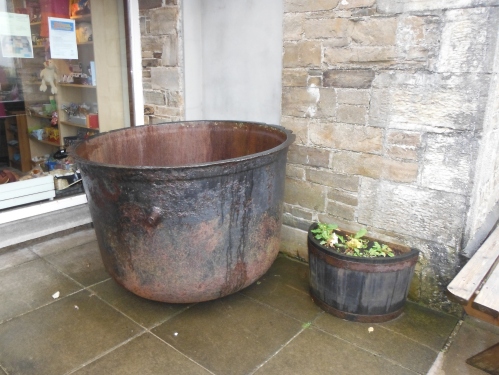 The soup pot at Dunfanaghy Workhouse

At the height of the Famine, Hannah sometimes had  to go to get the ‘broth’ in the village, each family having a ticket depending on the number in the household. She staggered and crawled home with it, too weak with hunger to walk properly, and so ravenous that she was tempted to help herself to the contents.  There were four houses that had land to grow oats in Hannah’s locality, otherwise people like the Herrity’s went hungry. Hannah did not seem to get her fair share of rations at home and often the neighbours would give her food, knowing that she was being starved by her stepmother. Two of her younger brothers died during this time.

Following a particularly severe beating and fearful that she might be killed while he was away, Hannah’s father arranged for her to go into service with a kind old lady in Doe who fed her and kept her happily for three years. After the old lady passed away, Hannah went to work for an unkind man who paid her badly and worked her hard and did not give her sufficient food and here her health began to fail. Eventually poor Hannah had to leave employment and had to walk over 60 miles (100km) to the hospital in Lifford where she remained for a year, and where, even though she was sick, she had to work.

Eventually Hannah ended up in Dunfanaghy Workhouse. She  described the horrors of life there with a particularly cruel matron ..”well there’d be maybe seven or eight dead in the morning..And god help us, she would strip the bed clothes down off them, and they’d be pulled out on the floor..the weemen said you’d hear the head of the corpse cracking down the steps till it was put in the dead house below” 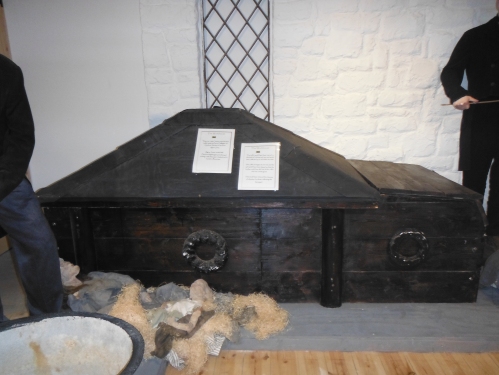 A Seven Body Coffin as used at the Workhouse. The bottom slid open so it could be reused

Hannah survived the awful experience and spent many years afterwards travelling about from farm to farm taking work where she could get it,wandering the roads around Sheephaven Bay,finding kindness in some houses, and none in others. Eventually she could no longer work and took to begging. 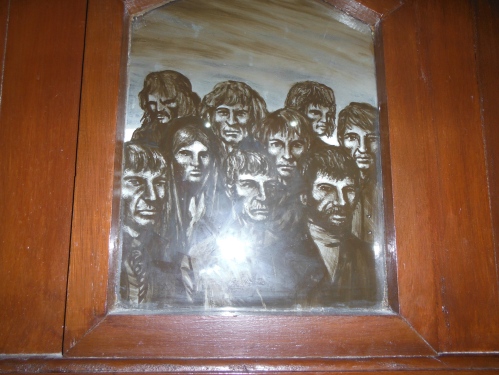 Engraved glass on the door to the Dunfanaghy Workhouse Heritage Centre

She came to the attention of  Mrs  Law, wife of the local member of Parliament, who arranged for a one- room cottage to be built for Wee Hannah in Parkmore, and here she lived out the remainder of her life in relative comfort. The neighbours were good to her and saw that she did not want for anything. Mrs Law  interviewed Hannah and recorded the story of her eventful life exactly as Hannah told it.

Hannah (Heraghty) Herrity appears on the 1911 census, as the head of her little household in Parkmore. Here we can see where she applied her mark to the census record as she was unable to read or write. She died in 1926 at about 90 years of age. Thanks to Mrs Law, Wee Hannah’s story  is heard by hundreds of visitors to the Dunfanaghy Workhouse, a real reminder of the brutality of life for  the poor in 19th Century Ireland. 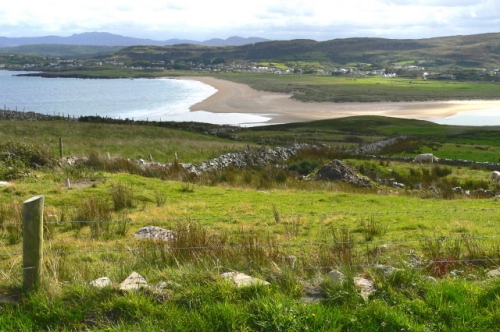 Outside Dunfanaghy there are three graveyards – the Catholic one and the Protestant one and  between the two is the Paupers Graveyard where victims of the Famine are buried.  Wee Hannah Herrity lies beside her friend Mrs Law in the Catholic part. 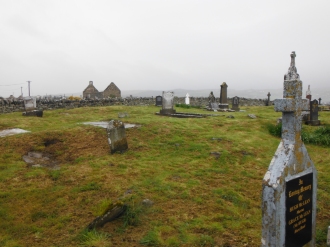 I am truly grateful to Dungfanaghy Workhouse for sending me the beautiful image below of the marker in the Famine Graveyard. It is a very fitting tribute to those who are interred here in a ‘no-man’s land’ between the two other graveyards. Basic, stark and rugged – such was their lives and deaths. 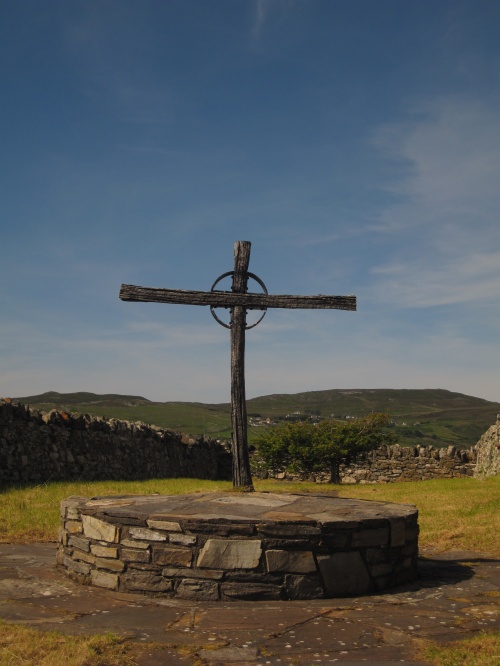 Wee Hannah’s story played out in the general area where I grew up. I lived  some 14 miles from her home and at one time my great uncle was a catholic priest in Falcarragh and my grandmother was his housekeeper. I wonder did they know her?  Hannah worked out at Horn Head at one time, a beautiful headland that I saw every day from my bedroom window. At one point she told of being out in the snow and falling into a drain in my own Rosguill area. Growing up, we never heard of a person like  Hannah, making her way alone through life in such deprivation and hardship.

On the day of our visit to Dunfanaghy Workhouse last year torrential rain made photography difficult.  A future project will be to take photographs of Hannah’s Places for this blog.

Dunfanaghy Workhouse is well worth a visit. Here you will hear Hannah’s story in her own words. The exceptionally friendly and helpful staff are very knowledgeable about the area and they have an excellent coffee shop!  ‘The story of Wee Hannah as told to Mrs Law’ is available in their shop. Visit their website at http://www.dunfanaghyworkhouse.ie