In June 2011, I put the name ‘Eithne’ and a slightly unusual surname into a search on Facebook. Two pages were returned – one person from Belfast was not who I was looking for, but the second one showed promise. And so I emailed – ”Are you the person who was with me at the St Louis Convent Boarding school in Dundalk, Co Louth, Ireland?” And back came the response –  ”Yes, I am ! ” This was one of the amazing moments I have enjoyed since becoming ‘e-inclusive’ as the EU likes to call it! Imagine! Finding someone who was a very special part of my life almost 5 decades ago!

Eithne hails from County  Monaghan, a county bordering  Northern Ireland to the south,  and I was from County  Donegal,  a county that also borders  Northern Ireland to the  north-west, so  we already had something in common!   We two Ulster women found ourselves deposited as 13 year olds in a convent boarding school run by the St. Louis Sisters in Dundalk Co Louth – many miles from Eithne’s Castleblayney  home and even more  from mine in faraway Carrigart, County Donegal.

Some of the dormitories were in the Castle on the left

It was 1961. Boarding school had serious disadvantages –  nights of lonely crying into the pillow as we faced into three terms of endless weeks  missing family and friends and home; months of rising at 7 am; months of cold water for washing ‘everywhere two skins meet’; months of seemingly endless  study; months of endless  praying. Add to the mix:  no boys ; no privacy as only curtains separated our ‘alcove’  sleeping spaces – each containing  a single bed, a chair, a locker with a towel rail  topped by a green plastic basin and beaker,  as well as a single  wardrobe. This was ‘home’ for up to 14 or 16 weeks at a time, three times a year, for 5 long years. 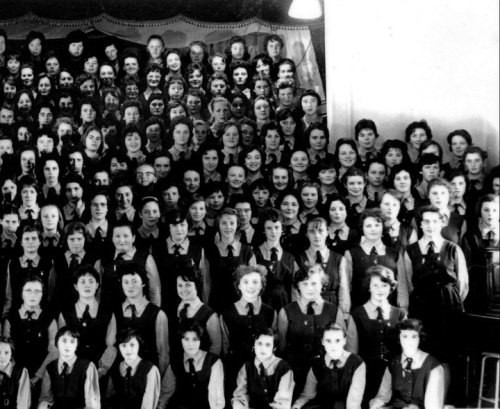 Here we learned life long skills in the art of sharing:  how to divide a three week old  quarter sandwich into five portions with the tail of a steel comb;  how to dissect a small chocolate Turkish delight sweet  into 6 minuscule portions so everyone could share the last remaining morsel of luxury; how to eat a chocolate cake so that only crumbs remained, then pen a letter of complaint to the manufacturer returning the crumbs, stating that  it tasted of petrol. The plan worked sometimes and we got a replacement cake! The demands on teenage hormonal girls were truly extraordinary, and – it has to be said –  were also character forming. There was one huge advantage: friendships that formed in these  adverse conditions ran deep and true.

A couple of St Louis Nuns – the delightful Sr Colmcille on left.

Eithne and I spent happy summer holidays at each others homes in Donegal and Monaghan. Her home was so exotic –  she lived in a fairly large inland  town compared to my small village, her family had a shop and a pub no less  – and her mother was just the nicest woman ever you met!  There was a very beautiful lake nearby where we talked and we walked, lay in the sun  and eyed up the local talent.  On visits to Donegal, Eithne fitted into our lives  like a hand into a glove, and here too we eyed up the local talent and walked and talked on our big deserted beaches. Sadly Eithne changed schools in 1964 when  she left to go to school elsewhere, while I remained in the Louis for a further 2 years.

Life continued to send us in different directions – in Eithne’s case she emigrated, became a nurse, married and moved between England , Scotland and Holland. In my case I also emigrated to England  and with many changes of address we drifted apart. A lifetime later Eithne, after the Facebook search,  was coming to Ireland for a visit and so we arranged to meet for lunch last summer!

It was with a mixture of excitement and trepidation that I boarded the bus – what would we talk about?  Would we have ANYTHING to talk about? What if lunch  is just too long? As I approached the meeting point I saw her….later I was intrigued that I had recognized her from the back, as she was facing away from me, but there was something so familiar about her standing there, as though I had seen her just a few days before. I called her name and she turned round….

And so it was  – lunch stretched to almost 4 hours of non stop banter and reminiscing. Life stories were recounted  including births marriages and deaths of family members we each knew well. We looked back with a great sense of fun  at the quite severe existence we endured in the Louis, and how we laughed as we recalled the fun we had when rules were being broken.

Life has certainly thrown some challenges to both of us in the intervening 48 years, but we have survived.  I am thrilled to have sent that email, to have rediscovered a friend, to discover that  true friendship is enduring and can pick up where  it left off, no matter how many decades have passed!  I rediscovered a kind, gentle, caring person with a lovely sense of humour – what more could a friend wish for ?

Thanks Eithne, so  glad to be able to call you ‘friend’!

Filed under Irish History, Life in the 1960s, Living in Ireland, Oral History