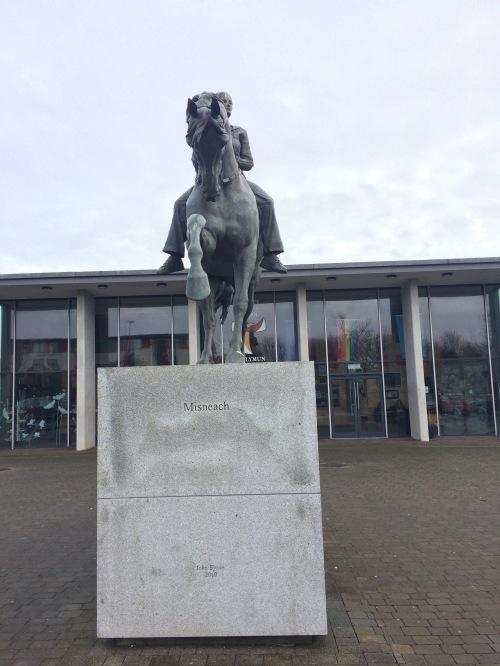 This post has taken years to get to publication! The original draft was made years ago when I first heard the intriguing story of a new sculpture of a young girl on a horse unveiled in Ballymun, a suburb of Dublin’s northside. Ballymun would not immediately spring to mind as a location for bronze street art. It was here that several high-rise blocks were built to rehouse people from the inner city.  The high rise developments were totally unsuitable and with no amenities the area gradually became known for its many social problems. The high-rise blocks were demolished and replaced with houses. A sculpture was commissioned as part of the Ballymun Regeneration Project.

John Byrne is an Irish artist and winner of many awards for his work. At a recent event at the National Museum of Ireland, John was one of the speakers, along with my son, Damian  Shiels, an historian of the Irish in the American Civil War and Dr Emily Mark-Fitzgerald, a specialist  in commemoration and public art. As he began to speak I realized that he was the man who had conceptualized this wonderful Ballymun project. I was anxious to discover where it is located as several half-hearted attempts to locate it by driving slowly around Ballymun had failed to find any trace of it!

Years ago there was a celebrated equestrian statue standing in Dublin’s Phoenix Park. It had been erected in 1880 as a memorial to Limerick- born Viscount Field Marshall Gough. There was much public debate at the time as to where the statue should be located but eventually a site was chosen in Dublin’s Pheonix Park.

The inscription on the monument read

‘In honour of Field Marshal Hugh Viscount Gough, K.P., G.C.B., G.C.S.I., an illustrious Irishman, whose achievements in the Peninsular War, in China, and in India, have added lustre to the military glory of his country, which he faithfully served for seventy five years. This statue [cast from cannon taken by troops under his command and granted by Parliament for the purpose] is erected by friends and comrades’

The monument was designed by the renowned Irish sculptor John Henry (J.H) Foley. His better known works include the Daniel O’Connell Monument on Dublin’s O’Connell Street, Fr. Mathew in St Patrick’s Street in Cork, Prince Albert in the Albert Memorial in London and Stonewall Jackson in Richmond Virginia, as well as Burke  and Goldsmith at the entrance to Trinity College, Dublin, to name but a few.

Gough’s horse was not created especially for him as it was was cast from an existing mould made by Foley some years earlier in 1858, for the equestrian statue of Viscount Hardinge. Obviously this magnificent animal was suitable for the most prestigious military men.

Viscount Hardinge of Lahore, in Calcutta in the 1860s  (Image Wikimedia Commons)

The Gough Memorial, with a copy of Hardinge’s horse, stood proudly in the Phoenix Park for some decades. However, it eventually attracted the attention of militant Irish Republicans who made a number of assaults on it. In 1944 Gough was decapitated with a hacksaw and his sword was removed. It was some time later that the severed head was found, at low tide, embedded in mud in the River Liffey.

The head was reattached but just over a decade later the right hind leg of the horse was blown off by explosives. Apparently he was then jacked up with bits of timber.

The final demise came in June 1957 when a loud explosion blew Gough and his horse from the plinth, with man and beast blown to bits. There was much genuine lamenting as the statue was considered to be the ‘finest equestrian monument in Europe’ by any commentators.

Vincent Capriana a Dublin poet, recorded an attempt on the monument in his well known bawdy poem (which some readers may find offensive).

There are strange things done from twelve to one
In the Hollow at Phaynix Park,
There’s maidens mobbed and gentlemen robbed
In the bushes after dark;
But the strangest of all within human recall
Concerns the statue of Gough,
‘Twas a terrible fact, and a most wicked act,
For his bollix they tried to blow off!

‘Neath the horse’s big prick a dynamite stick
Some gallant ‘hayro’ did place,
For the cause of our land, with a match in his hand
Bravely the foe he did face;
Then without showing fear – and standing well clear –
He expected to blow up the pair
But he nearly went crackers, all he got was the knackers
And he made the poor stallion a mare!

For his tactics were wrong, and the prick was too long
(the horse being more than a foal)
It would answer him better, this dynamite setter,
The stick to shove up his own hole!
For this is the way our ‘haroes’ today
Are challenging England’s might,
With a stab in the back and a midnight attack
On a statue that can’t even shite!

The remains of Gough and his lovely horse were put into storage and were eventually sold on to a distant relative of Gough’s. He restored the monument which now stands in Chillingham Castle, Northumberland in the north of England, safe from the matches of Irish Republicans. 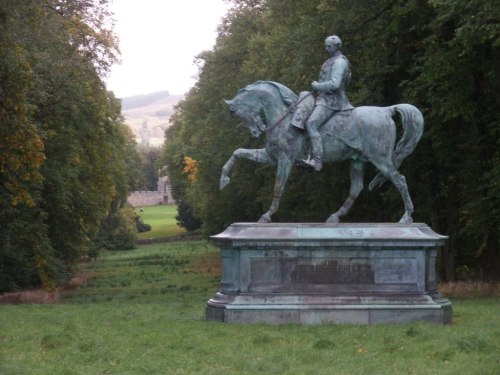 Gough in his new home in Northumbria (Image Wikimedia Commons)

Enter John Byrne. John decided that he would like to copy the famous Foley horse, return him to Dublin and place him in Ballymun.  He and his team worked with the new owner  of the monument and made a polystyrene mould of the horse, which was sent to the foundry. He then held auditions to find a young Ballymun person to complete his sculpture. There is a tradition among young people in the area of keeping horses and riding them bareback. A young rider named Toni Marie Shields, then aged 17 was chosen as the model for the statue that was to be the centre piece of the regenerated Ballymun town. 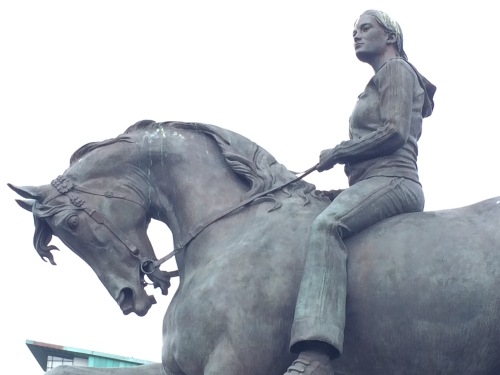 The sculpture is 1.5 times bigger than lifesize.

But the saga of Gough’s Horse does not end here. If you visit Ballymun town centre today Misneach will not be anywhere to be seen, much less be the centrepiece to the revitalized town.

Misneach became a victim of the economic collapse in Ireland. It was decided that it would be erected in a temporary location to save  the expense of moving it again when the Metro North train link to Dublin airport through Ballymun was built. The Metro Rail link never went ahead although every now and then it gets a mention by politicians.

For more about  the sculptor see