Tag Archives: I have a dream

Memories almost overwhelmed me in the cinema during the opening moments of the Stephen Spielberg film ‘The Post’, starring Tom Hanks and Meryl Streep. The sound of Huey helicopters is synonymous with the Vietnam War, a helicopter war that ‘wop-wop-wop-wopped’ from our television screens in the 1960s. The ‘wop-wop-wop-wop’ was the background music to the images of young men pouring out of these choppers being ‘inserted’ into fields in Vietnam. The ‘wop-wop-wop-wop’ was the background music to young men now with old faces, haunted expressions and staring eyes climbing back into them to be evacuated to safety. It was the relentless background sound effect to the crouching running stretcher bearers loading up casualties. It was the dirge to which thousands of bloodied and broken dead bodies of young men, in the hitherto  unheard of ‘bodybags’, were loaded from battlefields and whisked away to be shipped home in boxes. ‘Wop-wop-wop-wop’.

And so the film began with the Hueys. ‘The Post’ tells the story of the publication of the Pentagon Papers, secret United States government reports of the political and military involvement in Vietnam that had gone on from 1945 to 1967. Daniel Ellsberg, a former Marine, who had worked on the reports, decided that the public needed to know that the government had been misleading and lying to them for decades about the reality of the war. It was a war that they could not win, yet it was peddled as ‘holding back the tide of Communism’. In reality, tens of thousands of lives were lost or destroyed because the United States needed to ‘save face’. Ellsberg copied the secret report and gave it to the newspapers- The New York Times initially,  and when that newspaper was gagged by the Courts, the Washington Post continued the exposé. It is a fascinating story and well worth seeing.

It occurred to me that many of those viewing this film would not have any clue as to the extent of negative feeling about this conflict in far-off Asia. As I sat there I was reminded of those days and how I became involved in the world-wide protests and demonstrations of the 1960s and 1970s.

Roll back the clock a few years, to 1963. In August of that year I vividly recall walking into our kitchen at home and being rooted to the spot as Martin Luther King delivered his inspirational ‘I have a dream’ speech on TV. It was at this exact point in time that I became aware of what was not right with the world. In modern parlance we would say that I was ‘radicalized’. This was a time when African Americans were struggling for equal rights with their fellow white countrymen. News programmes were dominated by race riots and protests, with students and young people taking to the streets for a fairer society, often risking imprisonment or even serious injury.

As 16 year old pre-leaving certificate year students in an Irish convent school in 1965 we were allowed access to newspapers in order to prepare for our examinations. Every day there was coverage of the Vietnam War. I remember well seeing a headline along the lines of ‘Vietnam War Escalates’. Visuals and sounds were added by the news on the TV. It was shocking to see these young lads a few years older than ourselves being shipped out, and to see what could happen to them. I was always eager for the news the following day to see what was happening and followed all events closely. I was of course delighted that the Vietnam War came up on the English examination paper in 1966! 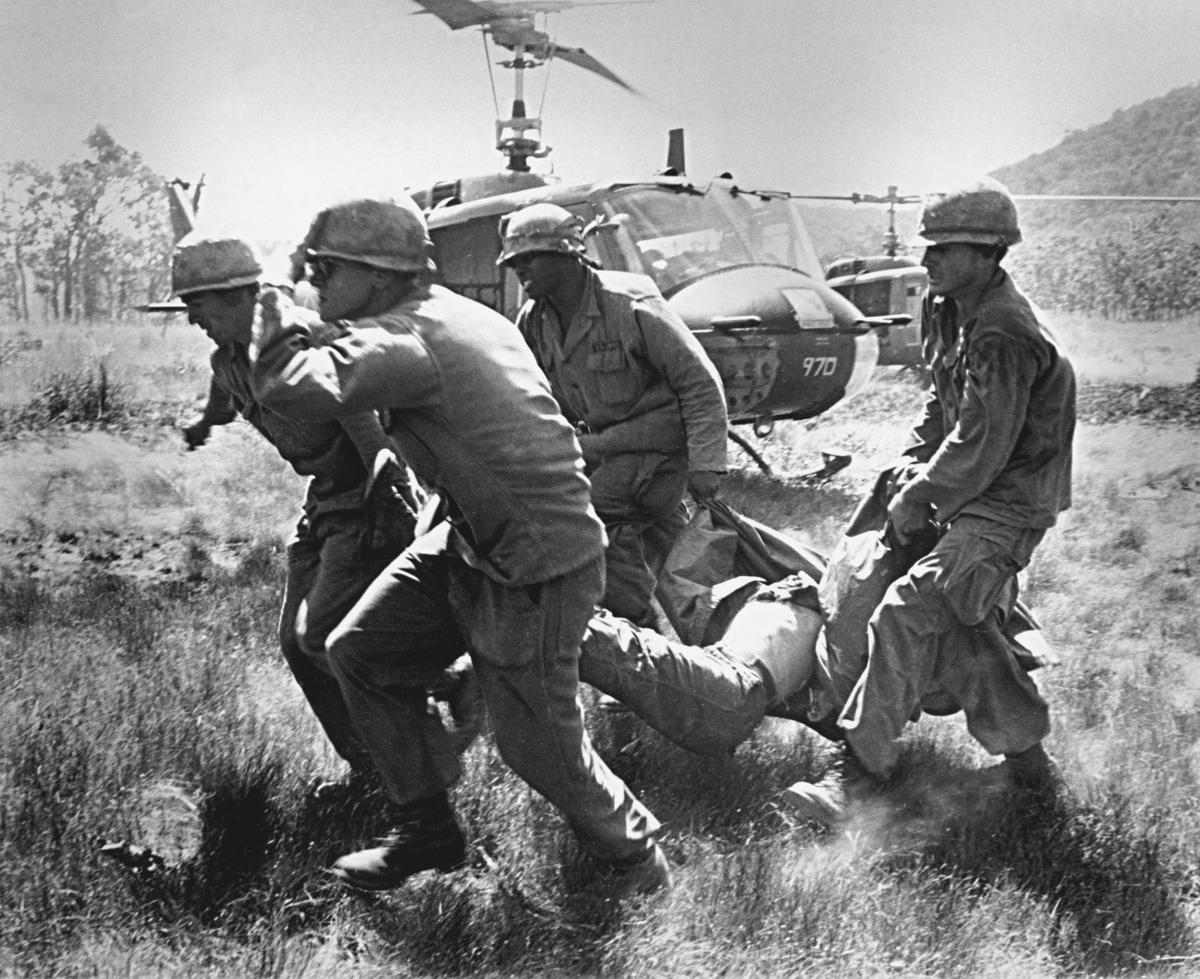 I emigrated to England in 1966. My new work colleagues in the medical research laboratory were of a similar age and a political view was as important as being up to date with fashion and music. So we talked a lot about political and social issues, and of course the war in Vietnam.

Meanwhile, in 1967 Che Guevara, a young Argentinian revolutionary was executed by the United States in Bolivia. A major figure of the Cuban Revolution, his stylized image become a symbol of rebellion. With his image sellotaped to walls in millions of bedrooms, he inspired our generation. In 1968 Martin Luther King and Bobby Kennedy, both iconic figures, were assassinated. There was a growing sense of social unrest as protests, mainly by students and young people spread across the globe. By this time there were a half million Americans in south east Asia.

Street demonstrations had a variety of themes, such as disapproval of nuclear weapons, Ban the Bomb marches, and the racism of Enoch Powell, but the hottest issue of the time was without doubt, the Vietnam War and specifically America’s involvement in it. All across the world protests were taking place – Italy, France, USA, Germany – in all  there were anti war demonstrations in 56 countries. The daily statistics at the time were astonishing as the death toll kept rising…American soldiers deaths shot up as the war intensified.

I made my placard recording the number of dead young men – I think it was around the 12,000 mark – and headed off to my first demonstration at Trafalgar Square on St Patrick’s Day in 1968.  We were a happy group of young people – at 19, I was one of the youngest in our group of friends – delighted to be adding our voices to the outrage, and feeling very strongly that we were a force for good and that we could change things. After speeches we headed off chanting and marching to Grosvenor Square, where the United States Embassy was located. The police had placed a cordon around the building and prevented the crowd getting too near. Being towards the back of the crowd, we did not experience the violence that ensued with baton charges and mounted police charging into the crowd. Hundreds were arrested and many people were injured. The noise was incredible!  Martin Luther King was assassinated just weeks later in April, and in June of that year Robert Kennedy was also murdered.

In October 1968 the number of protesters on our demo had swelled to tens and tens of thousands – possibly 100,000 – and again we descended on Grosvenor Square. There were police everywhere, but the mood among the marchers was good as we chanted and sang our way along the streets.  We again stayed at the back, but the pushing and shoving was frightening, yet we chanted away adding to the noise, and looked out for one another. It was a most exhilarating experience to know that similar protests were taking place across the world.

While the reasons for being there were varied, and many groups were represented, our protests at the time were very much focused on the soldiers of our own age whose lives were laid waste and on the huge number of  innocent men women and children who were being killed and horribly maimed. Had we known at the time about the Pentagon Papers I wonder if we may have been out demonstrating more often and more forcefully?

The war raged on and although the number of casualties became fewer, more shocking images would stun us. Not least that of the little girl, 9 year old Kim Phúc,running screaming down a road having been set alight by a napalm bomb- a gel like substance that sticks to flesh and burns for at leasts 10 minutes.

The horror of war (Image Wiki[edia)

Protests continued on campuses and cities across the world until finally the United States pulled out in 1975. And what if the reports in the Pentagon Papers had been known years earlier?  How many lives would not have been lost in vain? While the leaking of the papers had a huge impact on the relationship between the U.S. Government and the people of that country, the war rumbled on for more years afterwards. The contents were ‘declassified’ in 2011.

The statistics of the conflict (war was never declared) are horrible and will never be really known. It is estimated that between 1 million and 3 million Vietnamese died in the conflict, together with a further 400,000 Cambodians and Laotians. Hundreds of thousands were wounded.

Many years later I stood at the Vietnam Veterans Memorial Wall in Washington D.C. It is an astonishing sight.  Two 75 metre lengths of black marble are engraved with  58,318 names of the men who lost their lives in a war to uphold the ‘honour’ of a country. The average age of those whose names are here is 23.1 years.

And what if the reports in the Pentagon Papers had been known years earlier?  How many lives would not have been lost in vain? While the leaking of the papers had a huge impact on the relationship between the U.S. Government and the people of that country, the war rumbled on for more years afterwards. The contents were ‘declassified’ in 2011.

Vietnamese women and children in Mỹ Lai before being killed in the massacre, March 16, 1968.[62] They were killed seconds after the photo was taken.[63] Photo by Ronald L. Haeberlen (Wikipedia)

I look at these images of the wall with all those names and the faces of these lovely people about to die, and can’t help but wonder could they have been saved if we had protested earlier and more loudly.

The Pity of War.

The table of casualties is taken from the US National Archives at https://www.archives.gov/research/military/vietnam-war/casualty-statistics