In the late 1930s in Ireland the Irish Folklore Commission set about enlisting National Schools (Ireland’s Primary level schools) to help gather folklore. The idea was that the schoolchildren would get stories from parents, grandparents and neighbours about traditions, legends, superstitions, pastimes, trades, cures and any aspect of life in the local area. The children recorded these stories on exercise books. Schools all over the island (all 26 counties) took part in the project that lasted several years. Over 50,000 schoolchildren from 5,000 schools took part,resulting in over half a million pages of manuscript, known as The Schools Collection, or in Irish,‘Bailiúchán na Scol’. This wonderful collection is online at http://www.duchas,ie/en. Although not yet fully transcribed, and with much of it in the Irish language,there is a wealth of information here, including some stories highlighted today by Duchas on Twitter. (@duchas_ie).

Since Lent began yesterday, Duchas has highlighted some references to the penitential Lenten season. The day before Lent is Shrove Tuesday, known as Pancake Tuesday or Mardi Gras in other cultures, then we have Ash Wednesday, Chalk Sunday and Salting Monday. Ash Wednesday, Spy Wednesday (the Wednesday before Easter) and  Good Friday were known as’ black fast days’. In other words only a small amount of food was permitted.  I had not heard of the Chalking Sunday mentioned below,  and love the idea of being salted to be preserved! After all we preserve  fish by salting, so why not women too! Here is an extract from The Schools collection on Lent, beautifully written in the hand of a pupil in Tubbercurry, County Sligo. 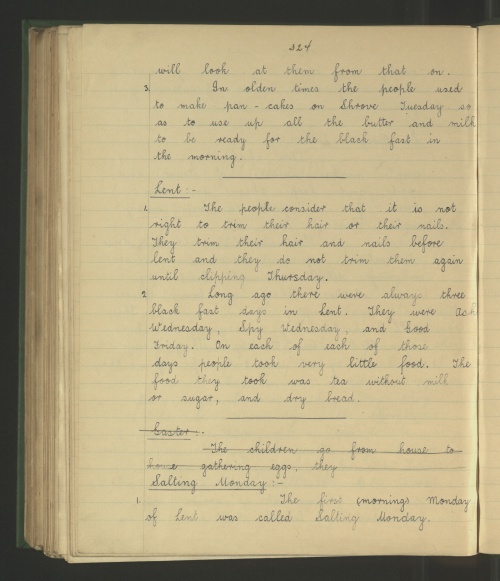 The actual entry can be seen here.

More about The Schools Collection

The Schools Collection has an extensive amount of information on traditions and social history. Looking at my own County Donegal village, I found three schools that had submitted material to the collection. Manor Vaughan school right in the  village has contributions describing the number of houses in a townland, how many houses were thatched or slated and common names as well as nuggets of information long since forgotten. This record is one such and is an invaluable snapshot of the townland of Aughalatty in the late 1930s.

Not all were in English however. Mulroy School, where my grandfather was the teacher, also participated. The Mulroy transcripts are in Irish. My grandfather seems to have written the stories collected himself, so we don’t know if he merely transcribed them or if he actually collected them from the contributors. He has several contributions from a Mary Vaughan then aged 67 and I wonder if she might be the old woman I  remember in a black shawl when I  was growing up in Carrigart in the 1950s. 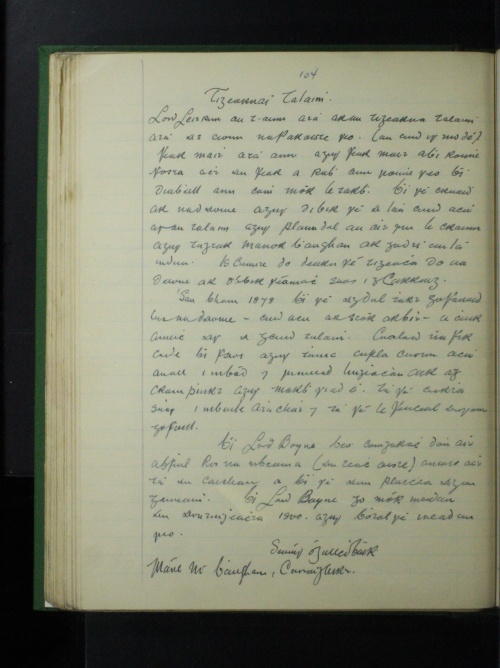 The Schools Collection can be searched here and some patience is required. It can be explored by county and by name and by topic. It is a work in progress, but even at this stage it is a rich treasure trove of social history and may even be of help to people trying to trace family history. It is a site that this blog will return to as often as possible, as I continue to explore my own social history through these fascinating pages. In the meanwhile, as I am single and the first Monday in Lent approaches, I am hoping that someone might consider throwing salt on me to preserve me a while longer!