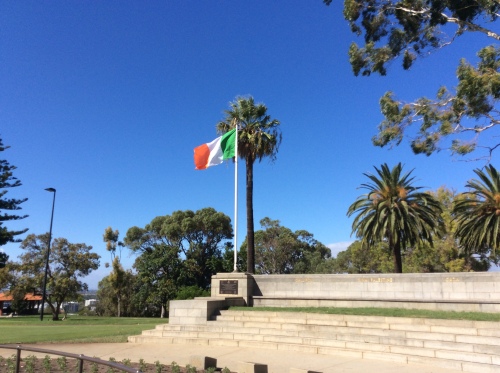 Something very special happens when you turn a corner 15,000 kilometers from home to see the Irish tricolour fluttering in a stiff breeze! Such was my experience yesterday as I attended a wreath laying event at Western Australia’s State War Memorial in King’s Park in Perth.

Regular readers will be aware of my journey of discovery of tragic Co.Tipperary man Martin O’Meara, winner of a Victoria Cross while in the service of the Australian Imperial Force in World War 1. See earlier posts here and here.

The Western Australia State War Memorial is dramatically located on Mount Eliza which overlooks Perth Water and consists of a main obelisk and a Court of Contemplation that includes the Eternal Flame.

Irishman Martin O’Meara V.C is included on these plaques. 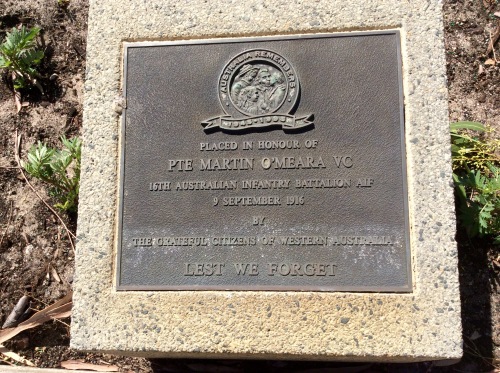 The Irish Minister of State in the Department of Justice and Equality, David Stanton was over from Ireland for St Patrick’s festivities and joined members of the RSLWA  (Returned & Services League of Western Australia) in honouring the State’s War Dead by laying a wreath at the eternal flame. This was followed by the laying of a wreath at the plaque in honour of Martin O’Meara V.C.  Minister Stanton,who was accompanied by Mr. Marty Kavanagh – Honorary Consul of Ireland, Western Australia, co-incidentally is the public representative for my constituency of East Cork, Ireland.

The beautifully simple ceremony was attended by people with an interest in matters Irish, and was facilitated by the former soldiers of the RSLWA, many of whom I believe had served in Vietnam. They looked resplendent in their medals and uniforms. 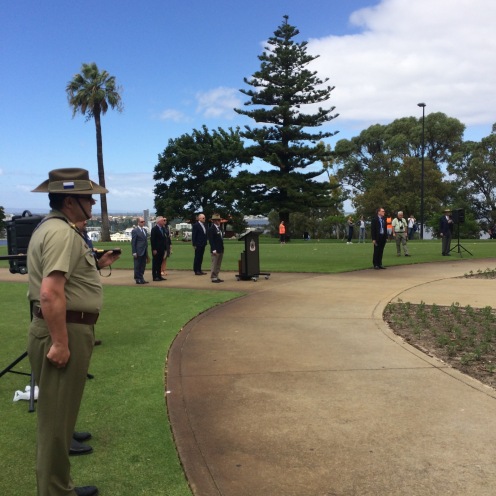 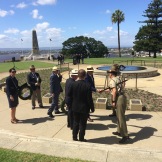 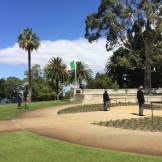 The Tricolour is lowered to half mast (Image Ⓒthesilvervoice)

Minister Stanton paid tribute to the many Irish who served Australia and other nations across the globe.

Minister Stanton lays a wreath of laurel from the Government of Ireland on the plaque dedicated to Martin O’Meara. (Image Ⓒthesilvervoice)

It is really heartwarming that so many emigrants from Ireland and their descendants remain very proud of their roots and celebrate, commemorate and honour  fellow countrymen whenever the occasion arises. The Irish Community in Western Australia is particularly active in this way!