Visiting the uniquely interesting Ceide Fields was a damp experience and as I left there heading west on my trip along the Wild Atlantic Way in June of this year, conditions became even wetter, with persistent view-blocking rain. It was disappointing to be in this beautiful area for the first time in inclement weather but I saw enough to be sufficiently captivated to resolve to return again….sooner rather than later.

The rain was lashing down..

As I drove along with Sruwaddacon Bay to my right, windscreen wipers at full tilt, I came across a very ‘odd looking’ graveyard on the side of the hill. I pulled up to investigate and couldn’t quite make out why this place did not look ‘quite right’ for want of a better term.

Something didn’t look ‘quite right’

I was quite amazed then to discover that this beautifully situated graveyard had suffered after very heavy rain some years ago when a landslide send thousands of tons of mud down the hill and carried coffins into the sea, never to be recovered. This catastrophic event took place in  September 2003 and the signs of it are clearly visible today.

The catastrophic landslide was blamed on overgrazing by sheep as the heather and upland plants were no longer able to bind the peaty soil together. The torrential downpours came after a particularly dry summer and the hillside was turned into mud that slid down the hill into the sea. I cannot begin to imagine what it must have been like for families whose graves had vanished under the tons of mud. 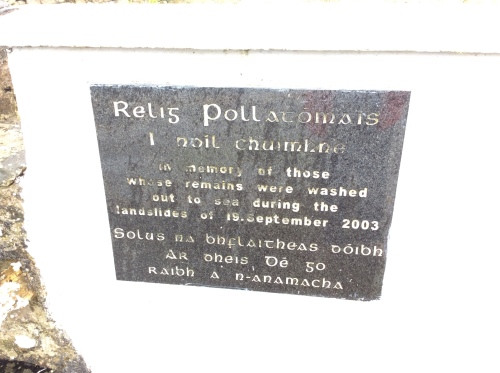 A plaque commemorates the awful event in 2003

There are three distinct sections to the graveyard at this site, but only the one in the foreground was affected by the landslide. 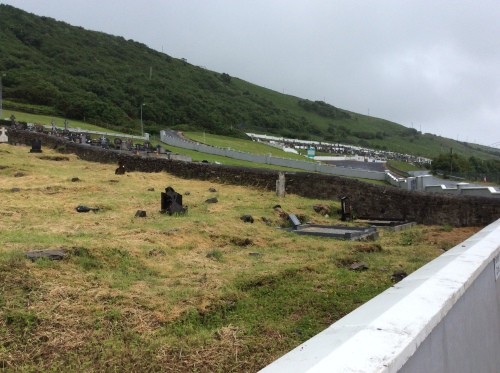 Steps have now been taken to make sure that there will be no repeat of this awful event,with  barriers installed to hold back any further soil slippage.

The location is quite beautiful, with the seashore only feet away. 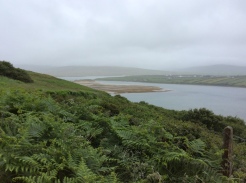 Sruwaddacon Bay at the base of the steep hill

Sruwaddacon Bay across the road

This graveyard is also known as Kilcommon graveyard or  Pollatomish graveyard. There is an excellent website here that has details of those buried there and, unusually, includes people for whom there are no headstones.

Had it not been pouring rain, I may not have noticed this site as I drove by.  A beautiful place for sure, one that reminds us of the power of nature which we should never underestimate.