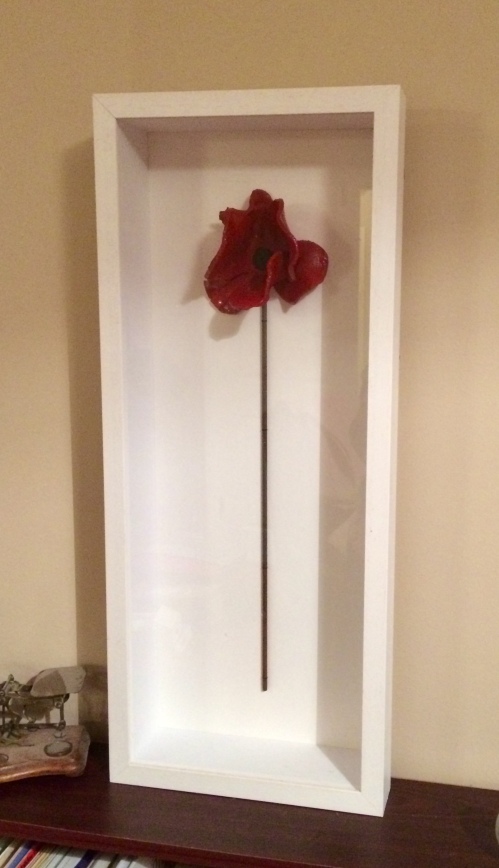 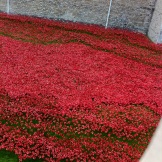 In 2014, on the 100th Anniversary of the start of World War 1 I went to see the fantastic poppy installation at the Tower of London. The imagery was very powerful and has remained with me ever since. It took a considerable length of time to see all 888,246 of these poppies, each one representing a life lost. The sheer scale of it, the blood-redness of it made a huge impression on me and anyone who saw it. 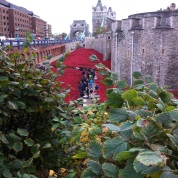 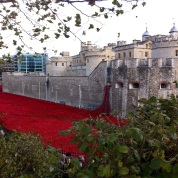 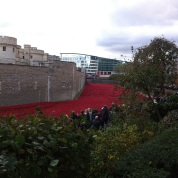 One of the poppies from that installation has been framed and hangs in my home. 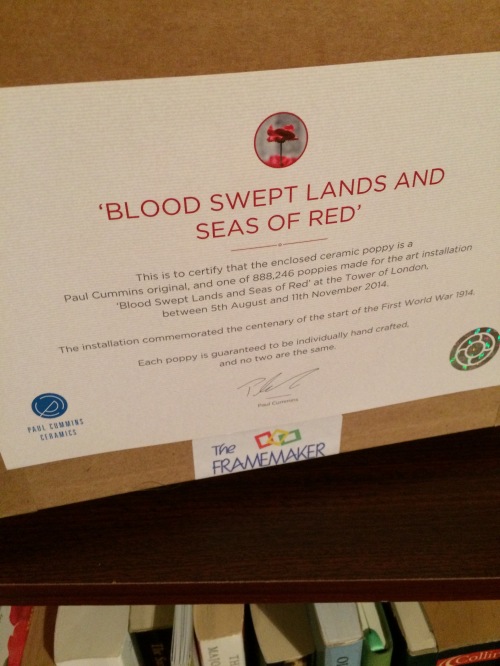 In memory of those who never came home from that awful conflict, especially those from my own parish of Mevagh in County Donegal and the countless others who suffered horrendous injuries from which they never recovered.

THE PITY OF WAR!

I have just returned from a short trip to London, England,where we  lived for almost two decades before returning to Ireland. London is a city that I love and I look forward to each return visit. This year marks the centenary of the start of the First World War which has been commemorated in the most astonishing way at the historic Tower of London.

Some decades ago, when I worked  in the banking area in the City of London, summer lunchtime would be spent sitting on the grass looking down at the Tower and enjoying the sunshine. We happily munched on our ham and mustard  or cheese and pickle sandwiches while enjoying the historic view and discussing the gruesome executions that took place just yards from where we dined! The Tower itself dates back to the 11th century, and is one of London’s most visited tourist attractions, housing the Crown Jewels, and protected by the colourful Beefeater Guards and those fearsome Ravens!

My visit this week was very poignant as I revisited the area I know so well, for the entire scene has been transformed to mark the centenary of the First World War. Ceramic Artist Paul Cummins has created  888,246 poppies and stage designer Tom Piper planned the layout of this art installation, Blood Swept Lands and Seas of Red. Beautifully conceived with a flow of poppies coming from a ‘weeping window’ on the tower, and it has been slowly spreading in a wave, a river of  poppies. Planting of the poppies(on wire stems) by volunteers began in July and has continued each day since then. At 11 am on 11 November the last poppy will be planted.
888,246 is the number of British army  fatalities in World War 1. Tens of thousands of Irish men volunteered (we did not have conscription in Ireland) to serve in this army, for we were then part of Britain and tens of thousands of Irish men died.  Up to 40,000 (the exact number is not definitively known) of these poppies represent Irish men – my countrymen – fathers, brothers, sons, cousins, uncles, nephews, who never came home from that war. They were from every County in Ireland from Donegal to Cork, from Dublin to Galway, from Sligo to Waterford to Kerry. Fathers, brothers, sons, cousins, uncles, nephews who died horrible deaths in muck filled trenches – often blown to bits, blasted to smithereens, dismembered, disembowelled, decapitated; many lay screaming in their last agony, many lay crying for their mothers or their wives in excruciating pain as the life drained from them; many gasped for air as their mustard gassed lungs turned into acid that burned them alive on the inside; many lay in mud filled trenches,with limbs missing and slowly bled to death, perhaps buried under dead comrades; many were vaporized and no trace of them was ever found.
For each of these, and those from whatever country that populated the British Military forces Scotland, England,Wales,Ireland, India,New Zealand, Australia, Canada and more,- whether obliterated  or who died a slow tortuous death – a poppy has been planted in the great moat of this iconic palace.
4 million people will visit to see them and yesterday I was one of them.  An astonishing number of people wept as they realized that each one represents a human being. The silence from such a vast crowd was very surprising.
These are the snaps of my visit in both daylight and after dark. I add my silence to theirs. 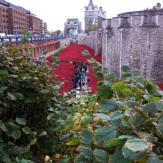 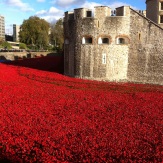 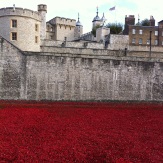 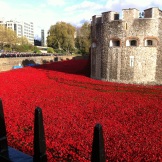 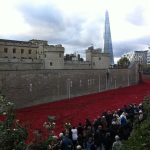 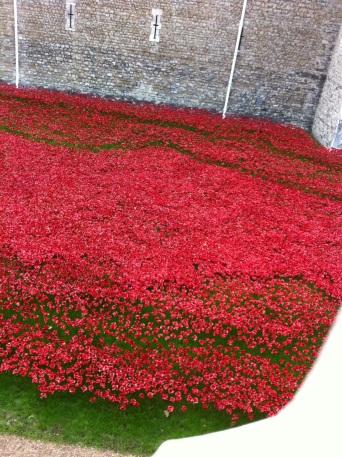 We are the dead, short days ago we lived…

At the 11th hour of the 11th  day of the 11th month in 1918, fighting in World War 1 officially came to an end, in accordance with the Armistice between Germany and the Allies. On the anniversary of this event, men and women who gave their lives  in conflicts are commemorated, and people all over the world wear poppies  in remembrance of them.

The wearing of the Poppy in Ireland remains  a contentious issue, although it has become more popular  in recent years. Not so many years ago in this country, families of those who had gone to war were, often with good reason, reluctant to speak of their soldier sons, brothers, fathers, uncles.  The story of their loved ones was buried- lost and unspoken for decades. However,  there has been a gradual rehabilitation of those mostly young Irishmen who went off to fight in the British Army of World War 1,  some 35,000  of whom never came home.

The tradition of wearing the Poppy began back at the end of World War 1. A Canadian Doctor, Lt.Col John McCrae, having witnessed the death of friends and colleagues in Ypres, penned the haunting and imaginative poem, ‘In Flanders Fields’ on May 3, 1915, the day after he officiated at the burial of his best friend.

In Flanders Field – the iconic poem by John McCrae 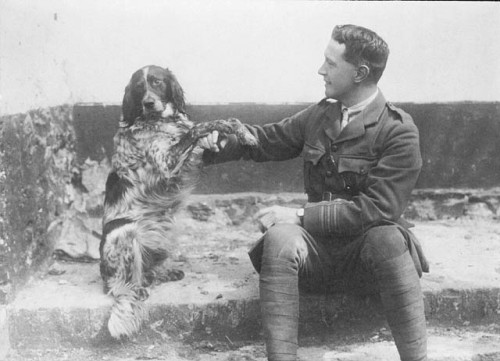 John McCrae had noticed that poppies readily sprung up where the earth had been disturbed. May 1915 was a particularly warm month and it is thought that this facilitated the germination of thousands of poppies that had lain dormant in the ground until it was disturbed.  As anyone driving along motorways in Ireland can testify, poppies will readily colonize any patch of poor ground, and so it was in  the battlefields of Gallipoli, Belgium and France. Lands  devastated  and pock-marked by shelling, littered with the remains of human beings – total wastelands, described as ‘murdered nature’, by the American pilot, James McConnell who flew over Verdun – often produced blazing groups of red poppies.

Poppy Field on the Somme. Picture from the BBC.

Moina Belle Michael, (1869 – 1944) an American teacher,was so inspired by McCrea’s poem that  in 1918 she set about having the Flanders Field Poppy recognized as a symbol of remembrance of those who had lost their lives in  the war. 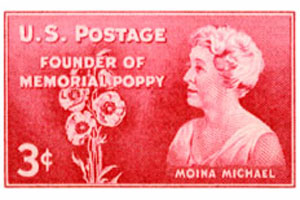 Moina achieved her ambition and on September 29 1920, the American Legion agreed to use the Flanders Fields Memorial Poppy as a national symbol of remembrance of those who did not return from war or who returned with physical or mental scars. 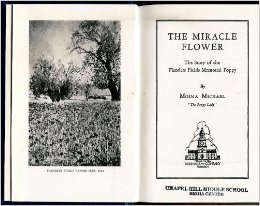 Another remarkable woman, Madame Anna Guérin, on a visit to the USA in 1920 was inspired by the efforts of Moina Michael and saw the  potential for raising funds by making and selling paper poppies to help French orphaned children and the war torn regions of France. She founded the ‘American and French Children’s League’ through which she organized French women, children and war veterans to make artificial poppies out of cloth. Anna sent thousands of poppies to be sold in America and then brought her campaign to all the countries that took part in the war. Canada adopted the poppy symbol in 1921 and in that year Anna herself went to London  to meet Field Marshall Earl Douglas Haig, founder and head of the British Legion who agreed to adopt the poppy as a symbol of the legion and the first British fund-raising poppy appeal was held in the run up to November 11 1921.

The Tipperary Annual Remembrance takes place each September to honour Irish fallen,in all conflicts. The inscriptions on the arch are of Irish who have died in service in the uniforms of other countries

The poppy is now recognized as a symbol of remembrance in Australia, New Zealand, the U.S., Canada, South Africa, Singapore, Thailand, Germany, Poland, Russia, France, Belgium, India, China, Ireland, Israel and Pakistan  and its symbolism has evolved from one commemorating lives lost or destroyed  in World War 1, to  one of remembrance for all those who gave their lives in all conflicts.

Notwithstanding the general acceptance of the Poppy as a universal symbol of remembrance, there are many in Ireland who see it as nothing more than an emblem of British imperialism. Just  a couple of years ago I was berated in public for wearing a poppy on my coat. ‘Are you a Brit?’ challenged  a work colleague (who happened to be wearing a Liverpool Football Club jersey and is a daily reader of an English tabloid newspaper). I have never understood how men who signed up to join the army often simply as a means of getting paid employment to help support a large family at home, became ostracised because of a ‘green’ discourse in Ireland after Independence. Nor have  I understood why that ‘green’ discourse led to families being fearful  of  honouring their lost loved ones. All down the centuries,Irish men have traditionally fought in armies and wars across the world, as evidenced in the Soldiers and Chiefs exhibition at the National Museum of Ireland.  Even in 1926, some 40,000 people gathered in Dublin to honour the dead on Armistice day. There is a magnificent  image of crowds of people gathered for the occasion in the blog of Come Here to Me. which can be seen here . This post looks at  remembering the dead  and the republican response to it. Looking back at this story now, it looks very much like the commemoration of Armistice Day was, as we say here in the mid west , ‘bate out of us’ by men with guns.

The sacrifice made by our people is part of our heritage, so why will we not join with other nations across the world  on November 11 to recognize them?  Are we not sophisticated and independent enough to do this?  In 2011 I posted about Fr Gleeson and the iconic image of him on horseback giving a last blessing to the Munster Fusiliers here just hours before they were killed and wounded in their hundreds.

The Blessing of the Munsters by Fr Gleeson on horseback, by Mattania

Fr Gleeson kept a diary, now  in the National Museum of Ireland. that captures the horrors of war. In it he wrote

“Spent all night trying to console, aid and remove the wounded.  It was ghastly to see them lying there in the cold, cheerless outhouses, on bare stretchers with no blankets to cover their freezing limbs. … Hundreds lying out in cold air all night at Windy Corner.  No ambulances coming.  They come at last. – at daylight.” (May 10th ,1915) These words are now engraved on  one of the slabs that lime the entrance to the Peace Park at Messines that commemorates  the joint action of the 16th (Irish) and the 36th (Ulster) Divisions in June 1917.

Image from https://www.facebook.com/pages/Its-Time-To-Remember-200000-Brave-Irishmen Royal Dublin Fusiliers  leaving what is now Collins Barracks in Dublin, on their way to Gallipoli where weeks later they were slaughtered by the thousand

We must remember all of these Irishmen with pride – husbands, fathers, sons, uncles, lovers, neighbours, – not to glorify war but  rather to acknowledge the horror and obscenity of it, in every generation.

We are the Dead……. Short days ago
We lived,….. felt dawn,…… saw sunset glow,
Loved and were loved, …….and now we lie
In Flanders fields.