A Pine tree that grew in Mayo 4,300 years ago and lay preserved in bogland.

In Ireland we have an annual celebration of our Heritage during National Heritage Week, part of the European-wide ‘European Heritage Days’, that promote every aspect of our wonderful, varied heritage. During this week there are hundreds of events showcasing the richness that we have inherited in our natural surroundings, our landscape our buildings and in our literature, history legends, and culture. This is an excellent time to make new discoveries and to revisit favourite places.

This year I will mark Heritage Week by recalling my visit just a few weeks ago to one of the most unique landscapes anywhere in the world that is to be found in North County Mayo, along Ireland’s Wild Atlantic Way. This place is called The Céide Fields, (pronounced Kay-Ja), a one thousand hectare monument that is the world’s largest dated Stone Age or Neolithic site. 5,500 years ago, a farming community lived, loved and worked here, raised their children, reared cattle, made pottery, grew crops, built homes, made gardens and buried their dead.

At first sight, there appears to be very little here on this barren landscape –  all the more bleak on the morning of my visit with strong wind and driving rain! The land that stretches up over the hill seems to be flat and featureless, and will be recognized by Irish people as ‘just bog’. Bog is an emotive type of wetland landscape here in Ireland.  For centuries peat bog has provided fuel for our homes  and in recent times efforts to conserve some of this type of endangered habitat have become politically charged and confrontational. But here near Ballycastle in Mayo, this very landscape has protected a way of life for thousands of years, covering features of times past with metre after metre of protective vegetation.

In Ireland we have two types of peat bogland covering 1/6th of our land mass – smaller scale ‘Raised bogs’ which are the subject of conservation restrictions, and the more ubiquitous ‘blanket bogs’ found in much of the West of Ireland and here at the Céide Fields. These wetlands have evolved over aeons as can be seen in the diagram below demonstrating the evolution of blanket bog from the past, when the land was farmed; bog formed and enveloped the area; then peat removal for fuel resulted in the ground being used for growing again.

Peat is formed from dead plants that have not fully decomposed due to the lack of oxygen in very wet soil. Sphagnum which has water retention properties is a key component of bogland as it keeps oxygen levels low and steadily the dead plant matter of the sphagnum accumulates. The bog can grow to many metres in depth as the vegetation keeps building up. Here at the Céide Fields, the blanket bog covered over the remnants of the prehistoric farms to a considerable depth, smothering trees and other vegetation that once grew there.

The bog covered, concealed and protected evidence of early life

A model of a turf bank showing evidence of turf cutting

This remarkable landscape was first noticed by a local man in the 1930s when he was cutting turf for his home fire. He noticed piles of stones as he cut deeper into the turfbank and felt that they were so orderly that they must have been placed there deliberately by humans. Years later his son, Séamus Caulfield an archaeologist, conducted  an investigation and discovered the series of walls, houses and tombs deep below the bog. The site has now been extensively explored and excavated to a limited degree, enough to show that the community of farmers who lived here 200 generations ago had reclaimed their ground by clearing vast expanses of pine forest. Seeds and pollen found at the site have been identified and dated and this with other dating methods has enabled scientists to determine the age of the site, the type of crops grown and the implements used.

Reconstruction of a plough used by these ancient farmers

There is a splendid award winning interpretive centre here, with guided walks available. There is a wealth of flora and fauna at this site unique to the habitat.  Unfortunately on the day of my visit inclement weather prevented such exploration, but by studying  the excellent exhibits I was able to et a great understanding of the treasure that is here.

The centre has a viewing platform that on better days than this, affords fabulous 360 degree views of the entire area. 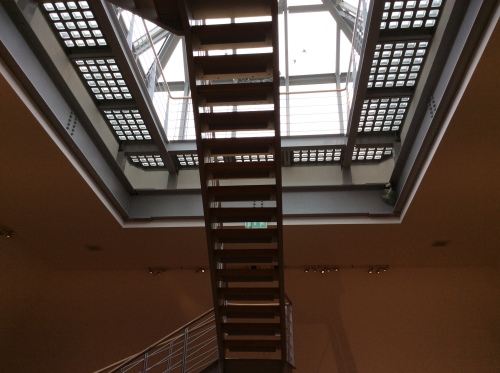 The steps to the viewing platforms.

In spite of the inclement weather I did venture outside on to the viewing area and was very happy to have a rail to hang on to in the very blustery wind and driving rain! 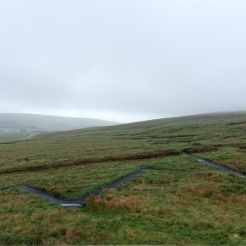 There is a viewing are for the cliffs below, but not for me today!

The site stretches up over the hill 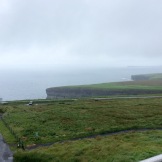 Looking back towards Downpatrick Head 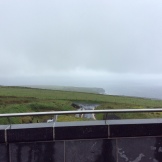 The cliffs to the west of the site, shrouded in mist 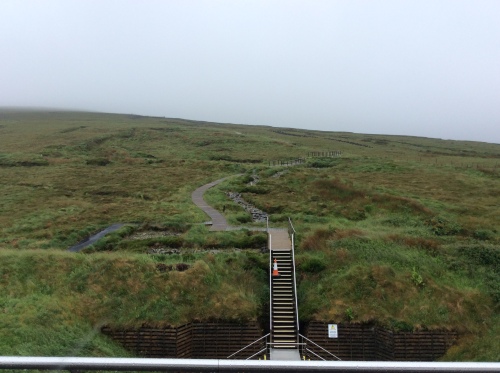 Steps leading to the heart of the Céide Fields, from where the guided tours begin.

It was a real thrill to finally visit this incredible site with an extraordinary and unique history. Irish Heritage at its best!

The graphic on the evolution of bogland is from the website http://www.irelandstory.com, which at time of writing is no longer available.