Aunt May: A life well lived.

This is an auspicious week in our family as it is the week in which we remember the centenary of the birth of our Aunt May.

Our grandmother, Mary Friel, as was the tradition, made the trip back from Glenswilly to her parents home in Pollaid, Fanad, to give birth to her first child, Mary Isabella. (known as May) We know from the birth certificate that Mary’s sister Susan was present at the birth, and later that day, Thursday, May 17, 1917, we can tell from the baptismal record that her brother Francis and another sister  Annie, made their way with the newborn baby to St Columba’s Church in Massmount to act as sponsors at her Baptism.

The second and third children of the family were born in Glenswilly, in 1919 and 1921. The family then moved to Ballyheerin, Fanad where the next two siblings were born in 1923 and 1925.
I have not been able to establish when exactly the family moved to Carrigart, but Aunt May was Confirmed there in1926 as we can see from the the certificate below.

This is to certify that Miss Mary Gallagher received the Sacrament of Confirmation in the Church of St. John the Baptist, parish of Mevagh, County Donegal, from the hands of the Most Rev Dr McNeely Lord Bishop of Raphoe on the occasion of his visitation in the year 1926. Signed John Cunningham P.P Carrigart 24th Nov 1937.

Aunt May was aged 10 when she was Confirmed. It is hard to know what her life was like in the subsequent few years. Her mother Mary became seriously ill and underwent surgery followed by a time recuperating away from home before finally passing away in July 1931 when Aunt May was only 14 years of age. Her father James was a school teacher and it is very likely that Aunt May as the eldest, played a pivotal role in managing and rearing her younger sister and brothers, the youngest of whom was only 6 years old when their mother died.

She told me that it was her wish to join the Sisters of Nazareth and to become a nurse. She had planned to enter the religious life at age 18. However, it was not until 1938, when she was 21 years old, that she made the journey to the Novitiate of the Sisters of Notre Dame de Namur in Ashdown Park, in Sussex where she was no longer Mary Isabella Gallagher, but rather Sister Patricia Mary.

The Convent of Notre Dame

Corpus Christ Procession in 1939. Aunt May would have taken part in this procession. 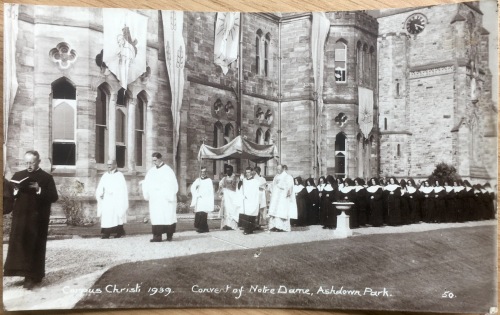 It must have been very worrying for her family knowing that she was near to London after the outbreak of the Second World War but she was evacuated to Birkdale Lancashire in 1940 where she stayed for 10 years. Far from the nursing career that she had wished to follow, her duties included being sacristan and sewing work which must have been a terrible disappointment for her, but without doubt, she accepted her lot as ‘God’s will’.

Her father was planning a visit to her in 1944 and went so far as to have a photograph taken for his passport/travel permit. However, it was not to be, as he died in November 1944 having contracted Typhoid Fever. Aunt May said that she was in Retreat at the time and she did not therefore receive the news of his death until well after the event. She was undoubtedly very close to her father and her siblings seemed to have had a more distant relationship with him. After their mother died she saw to it that they had all they needed. It was hard on them emotionally when she left to join the nuns, never to be home again, as was the rule at that time.

After her return to Ashdown Park, set in hundreds of acres of Ashdown Forest, (and home of Winnie the Pooh) she was in charge of the novitiate where novices learned the ropes.  Now too her youngest brother James (Seamus, Jim) had moved to London and was within visiting distance of her. His frequent visits to Ashdown to visit her must have made a big difference to her life, having endured life so far away from her family. He and his family made frequent trips to Ashdown and in time her sister Eileen too would visit.

Jim and Nancy were frequent visitors to Ashdown.

visit from Charlie Gallagher of Carrigart

Even the dog Sooty loved to visit!

Post Vatican 2, rules were relaxed and she was now free to travel although she initially had to stay in a convent. Her first trip back to Carrigart was after her Silver Jubilee. Our house was thronged from morning to night with people coming to visit her. The visit of a nun was quite an event so not only did she have visits from people who knew her, but also from people who had never met her before. I think by the end of her visit she had received a lot of ‘offerings’ in envelopes!

Aunt Mays return to Mulnamina Glenties o the home of her Aunt Maggie (seen here on her left)  and Uncle John. Also here are her sister Eileen, nephews Noel and Damian, niece Eva and children of her 1st Cousin Danny O’Donnell

Vatican 2 allowed for changes in the nun’s habit. Gradually, the long heavy serge skirt, the long black Rosary hanging from the waist and the wimpole were replaced by much more practical clothing. Over a period of a few years most  members of her congregation were wearing ‘ordinary’ clothes.

Visit from niece Cathy Coyle and Jim and Nancy at Ashdown. With the ‘new look’ in clothing 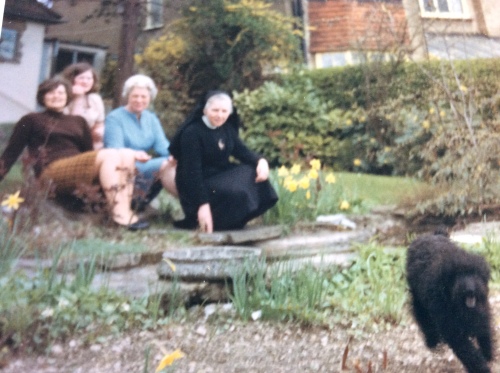 Aunt May visits her brothers house..here with her sister Eileen, niece Cathy and sister in law Nancy

In 1969 the convent in Ashdown was sold and Aunt May began a new career at the teacher  training college run by her order in Bearsden, outside Glasgow. The change would have been very dramatic as she left behind a life of good China cups and silver and embroidery and deer walking across the lawn . After 23 years enjoying the rolling parklands and forests of Sussex and the quiet life of a convent, the hustle and bustle of irreverent students in what was something of a concrete jungle was a complete shock to her system. On the upside, she was now near her sister Eileen and they exchanged visits frequently. As College Bursar she made great friends with the students and as she was such a talented Flower Arranger she was often asked to arrange wedding flowers for them.

At one of her friends weddings

One of the highlights of her life was the visit of Pope JOHN Paul II to the college at the end of May 1982.  She was Sacristan and had charge of preparing the convent chapel for the visit. A truly great honour for her.

Aunt May greets Pope John Paul II at the convent in Bearsden.

After the visit, the Vatican dispatched hand signed copies of the official photograph of the Pope kneeling in prayer in their chapel. 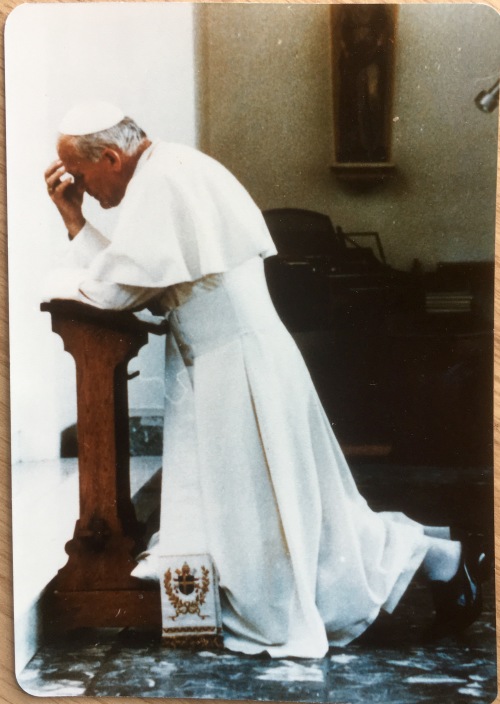 A large gathering of family and friends helped her celebrate her Golden Jubilee in 1990.  Brother arrived from the USA, another brother from England and a smattering of nieces and nephews and their families made for a great occasion for her.

With the Golden Jubilee cake

After retirement from her Bursar career she became the Sacristan for the College Chapel and she was so good at her work that students from the local seminary were sent to be trained by her in sacristy work. In all Aunt May spent 26 years associated with St Andrews College. She then moved to a house in Kingsborough Gardens for four years before making her final move to a retirement home for the Notre Dame sisters at Craigend on the banks of the River Clyde.
I loved to visit her here and enjoyed her flowers and sitting in the garden that she so lovingly tended. Her trusty secateurs resided in a box outside her bedroom door!
She enjoyed reasonably good health for a number of years but never really recovered from a fall that resulted in a broken hip.  My frequent visits were usually just for an overnight, flying from Shannon to Prestwick on a Saturday, hiring a car and driving to Dumbarton and home again on Sunday. On my last trip she had been transferred  to hospital on the very day I arrived. I don’t think she ever knew I was there but I stayed at the hospital from Saturday through to Thursday when I had to return to Ireland. She frequently asked for her brothers, but other than that she was not conscious.
She died on Thursday May 10th 2007, and was buried at the local cemetery in Dumbarton in the plot belonging to the Sisters of Notre Dame.
Aunt May led an unremarkable life in many ways. She cared for her younger siblings for a number of years, she made a huge sacrifice to enter a religious life in the knowledge that she would never see home again. But things changed for her with new locations, and new challenges. She adapted to them cheerfully. The freedom to visit family whenever she wished and to go on holidays often to Carrigart with her sister Eileen were undreamed of delights. On visits to our homes, she challenged us in many ways with her fussing, but at the back of it all she was a very loving and lovely lady – not perfect but good enough for us to be proud to call her Aunt May. 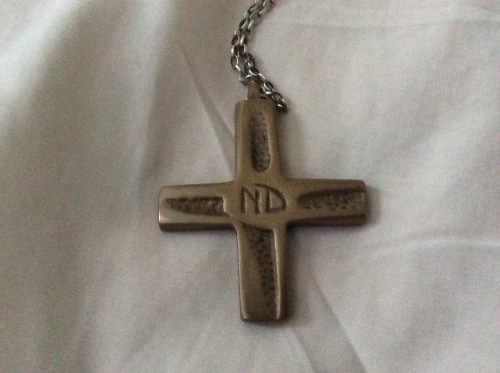 Normally religious sisters are buried with their bronze cross in the coffin. In her case it was overlooked and the Sisters very kindly asked me to take it in remembrance of her. She wore it daily for over 40 years. It travels everywhere with me and I am very proud to own it.

As we remember her on the centenary of her birth, it is an honour to place this memorial to her on the World Wide Web. Aunt May Gallagher/ Sr Patricia Mary may have led an unremarkable life, but she lived it well.  She was truly a remarkable woman. I miss her still.

Note: The Convent of Notre Dame at Ashdown Park is now a leading luxury hotel. You can see some images of the house and the beautiful Harry Clarke stained glass windows, including one that has 35 shades of blue, which were installed by the nuns on their website.  Click  here