I discovered this beautiful building on a recent trip to Perth, Western Australia, when on a mission to find out about an  Irish bishop who had fallen foul of the powers that be in Rome in the mid 19th Century. Somehow I seem to have missed St Mary’s Cathedral in Perth,officially the Cathedral of the Immaculate Conception of the Blessed Virgin Mary, on earlier visits. This is the cathedral church of the Roman Catholic Archdiocese of Perth, which is ever so slightly off the beaten track in that relatively small city. It certainly ranks among the most fascinating buildings I have visited as it has a fascinating story.

The history of this magnificent building spans three centuries. Officially opened in 1865, it has been a work in progress almost ever since, as it was only finally completed and officially reopened in December 2009. I engage with architecture at a very superficial level – if I like it, I will look at it – but I do know that this is a special place,unique because of the distinctive way architecture from various eras has been beautifully fused together to make a remarkable whole. Not unsurprisingly, at least to this layperson, this building has won an architectural award for the brilliance of its design. These are a few of my snaps which I hope might give a feel for this beautiful structure.

The original cathedral was begun in 1863. Bishop Serra went to Rome and secured donations in the form of money and marble for the altar, which arrived in Western Australia in 1862. The foundation stone was laid in 1863 by Bishop Salvado. Masons from the Benedictine monastery in Subiaco walked each day to the construction site, but progress was determined by the flow of funds, or lack of them from a small catholic congregation of about  5,000.  Eventually the cathedral was blessed and officially opened in January 1865.

The foundation stone of the original structure

The original building  was relatively simple with a square bell tower.

The Cathedral in 1865 on the left, with Mercedes College (Catholic Girls School) on the right

Between then and 1910 alterations were carried out, including the addition of a spire to the bell tower and the addition of two porches. As the catholic population continued to grow Archbishop Clune, the first Archbishop of Perth, (an Irishman – more in next post), set about fundraising for the enlargement of the cathedral. The foundation stone for the new addition was laid in 1926.

Stained glass windows were manufactured in Birmingham, England and beautiful mosaic floors based on the Book of Kells were modelled by an Australian company. However,it became impossible to raise funds to complete the envisaged building and work was halted due to the Great Depression. The Gothic style sanctuary and transepts were grafted on to the existing 1865 nave. The incomplete cathedral was blessed in May 193o with thousands in attendance.

Huge crowds attended the opening in 1930

The original plain building  and its nave to the front with the bell tower and two porches, has been attached to a new more elaborate extension – much more reminiscent of a cathedral. The outbreak of World war 2 after the great depression meant that plans to complete the cathedral were put on hold indefinitely due to lack of funds.

The foundation stone for the addition

The structure was a protected heritage building and the need for repairs became clear in the 1990s. The bell tower was crumbling and there was extensive rising damp. Fundraising began and following a bequest of 2 million dollars plans to complete the cathedral could finally be brought to fruition.  Still short of funds, the state stepped in with a contribution of 2 million dollars, and a further 3 million from the federal government. Finally the cathedral was closed in 2006 and building began.

The story of the construction is great reading in itself as the bell tower had to be moved a considerable distance and of course there was always the danger that the entire structure could collapse with the ground excavations going on.  In effect the 1865 nave was taken out and a huge hole dug in the ground for parish facilities below with the new cathedral part above. During construction remains of earlier bishops were uncovered so it was decided to incorporate a crypt  beneath the new altar. Costs soared to over 32 million dollars by the time the building was completed in 2009. (Those interested in the technical construction details may read more here)

The result is remarkable with the modern part sitting in the middle of the earlier structures. Perched on a hill, it is indeed an imposing and beautiful building.

The new round centre attached to the original bell tower 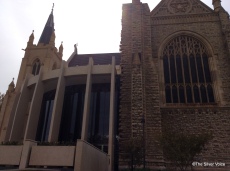 The new structure sits between the earlier two structures.

The entrance with new balancing but different bell tower added . the tower on the right is the old one 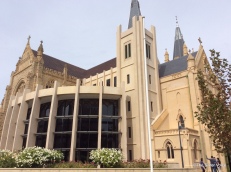 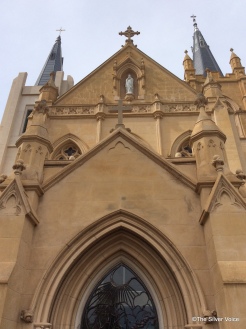 St Mary’s Cathedral, Perth, Western Australia. (Formally known as the Cathedral of the immaculate Conception of the Blessed Virgin Mary)

A most spectacular building on the outside, but inside it is a wonderful  space.

The modern central aisle leading to the circular altar, with the 1930 stained glass window beyond

It looks like a traditional church from the entrance, but with wonderful light that spills in from the high windows that open to help deal with the heat of the Perth summer. The modern Stations of the Cross are remarkable in that they are two strips of three-dimensional images, and each face has been modelled on a real person.

The stations of the cross – 2 blocks of 7 on each wall.

The mosaics are behind the main altar in the 1930s section. Clearly based on the Book of Kells, the floor was split from one side to another during an earthquake on 14 October 1968.

The stained glass windows and  side altars from the 1930s building also survive.

The is an amazing trinity of buildings, each having its own characteristics, yet all blend beautifully to form this wonderful space. A fabulous feat of architecture and well worth a visit!

Technical details of the construction

A wide angle professional photo of the interior

Filed under Emigration from Ireland, Ireland and the World, Irish Convicts, Irish diaspora in Australia