Limerick: A lunchtime walk through history

With a workplace on the southern banks of the River Shannon in Limerick City, Ireland, this is the spectacular view from my desk. 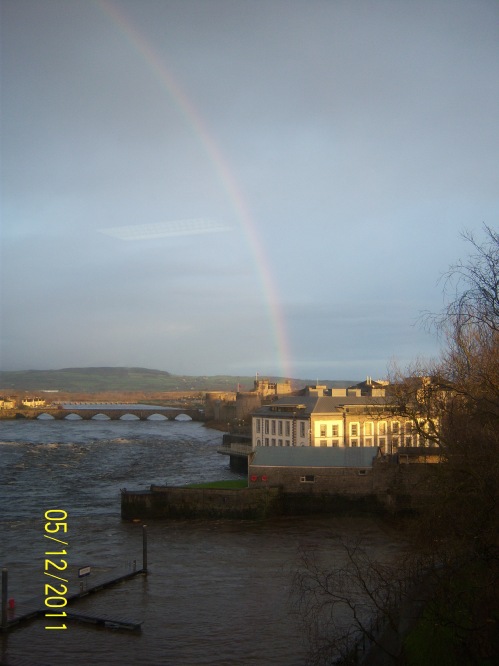 View from my desk.

The River  Shannon is tidal which means the water level rises and falls by about 18 feet twice a day, so the view is ever-changing. In the foreground is the Marina at the junction of the Abbey River flowing from the right, and the River Shannon. The white building is the Court House and behind it alongside the arched Thomond Bridge is King John’s Castle. The Rainbow’s End is in the Clare Hills in the background! My lunchtime walk of about 25 minutes is packed with interesting places and views, so stroll along with me through some of Limerick’s history! 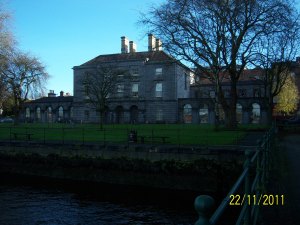 In the very first minute of my walk I come to the the Hunt Museum. This is the former Custom House commissioned by the Commissioners of Revenue as headquarters of the Collector of Customs for the Port of Limerick, which was completed in 1769. It was still in use by Customs in the 1980s as I recall attending there to sort out some paperwork when we returned from England to live in Ireland. Since 1997 the building has been home to the Hunt Collection – a private collection of art and treasures accumulated by John Hunt and his wife, Gertrude. Here you can see  Picasso, Renoir and Yeats as well as artefacts from medieval times and a coin that is reputed to be  “one of the thirty pieces of silver” paid to Judas for the betrayal of Christ. There is great home-made soup to be had in the Ducarts restaurants in the Hunt! 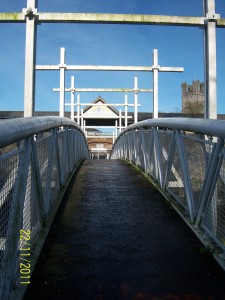 On then, behind the Hunt and over the Sylvester O’Halloran bridge, crossing the Abbey River that joins the River Shannon at this point. I had no idea who Sylvester O’Halloran  was –  I had assumed that he was a politician until I  ‘Googled’ him. Not so!  He was much more important –  an historian/surgeon who practised in Limerick from 1749,and was instrumental in founding the Royal College of Surgeons in Ireland (RCSI). He also developed a new method of treating cataracts. He was a historian of some repute – in 1774 he wrote a General History of Ireland  and in 1803 he wrote ‘a History of Ireland’. He died in 1807. This bridge leads to The Potato Market, begun in 1843 and in use to the 1940s. Now a car park, its once-cobbled surface leads to the very imposing St Mary’s Cathedral and the recently restored Courthouse. 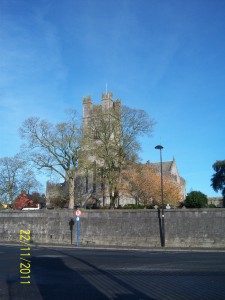 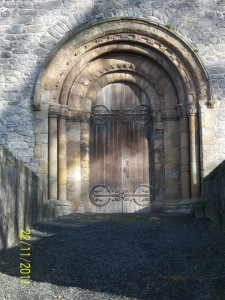 St Mary's Cathedral - Founded 1168 and still in use - a testament to the history of Limerick. This is the imposing West Door. 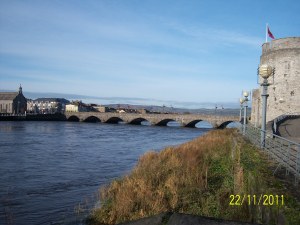 It is thought that the original Thomond Bridge may have been constructed about 1185. This is the main access point from King John’s Castle to the County Clare side of the river Shannon. The bridge we see today was completed in 1840 and was designed by the Pain Brothers. At high tide, the water reaches to almost the top of these arches. 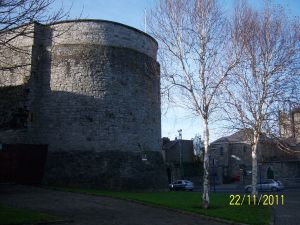 In the heart of medieval Limerick is King John’s Castle.  Built between 1200 and 1210, it has been renovated and extended  many times over the centuries. John was the son of King Richard II and Helen of Aquitaine. This castle dominated Limerick for some seven centuries. It is open to the  public who can get access to the top of one of the towers to enjoy spectacular views across Limerick and Clare. 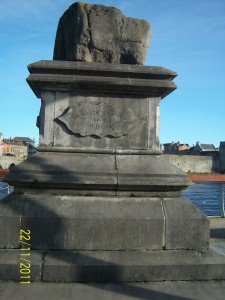 Crossing Thomond Bridge to what is known as the Clare side, we come to Limerick’s famous monument – The Treaty Stone. Mounted on a plinth, this stone is reputed to be one on which the Treaty of Limerick was signed on October 3, 1691, marking the end of  hostilities between the Williamites and forces loyal to King James the Second. The irregular shaped stone was previously used to aid people mounting their horses and stood outside a pub in Thomondgate. Originally twice this size, it was constantly under attack by souvenir hunters. It was mounted on a high plinth in 1865 to preserve what remained. It was  relocated by a few metres  in the 1980s. 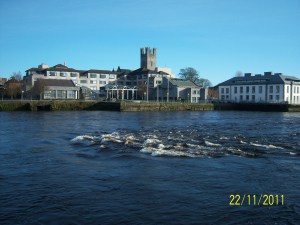 There is a new boardwalk along the edge of the river on this side, open except when very high tides are expected. From here we can look across at the very modern Civic Offices with the tower of St Mary’s Cathedral  behind. To the right, the white building is the Courthouse. This beautiful listed building dates from 1810 and was refurbished in recent times. The white water on the river marks the Curragower Falls. Beloved by kayakers at various stages of the tides, here they enjoy white water kayaking!  Surely, relatively unique in a city centre? 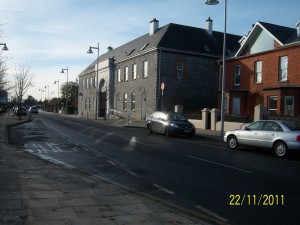 Continuing along Clancy’s Strand,  towards Sarsfield Bridge, we arrive at  Strand Barracks. This building has had an interesting history – originally built as a House of Industry in 1774..’to support the aged and feeble poor, to save helpless infants from perishing, to take care of lunatics…and to make the sturdy vagrant useful to society by his labour….’ Noble causes  indeed! 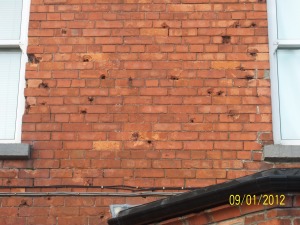 Damage to houses adjacent to Strand Barracks in 1922.

A solid stone building with a carriage arch leading to a courtyard, during the 19th Century it became an army barracks and was handed over in 1922 under the terms of the Anglo- Irish Treaty. In July 1922 it was ferociously bombarded for six days by the Free State troops. Despite coming under fire from armoured cars, snipers, machine guns and mortars the barracks was stoutly defended. Finally an 18 pound artillery gun was deployed  –  the first time such a weapon had been used in the city since the earlier siege  in 1691. Firing from Arthurs Quay across the Shannon, the barracks walls were eventually breached and the Republicans surrendered. 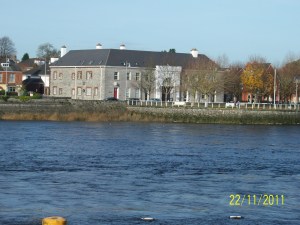 Strand Barracks from Arthurs Quay and red brick houses to the right .

We then cross back over the Shannon at Sarsfield Bridge where the river effectively enters the Shannon Estuary. This bridge was built in 1835 and once opened to allow ships to pass under to Arthur’s Quay. Although it no longer opens, the mechanisms can still be seen under the bridge. On the bridge is a monument commemorating the 1916 Rebellion as well as the  Shannon Rowing Club. At high tide, crews can be seen out on the water –  one of the loveliest sights on the Shannon on a summer evening! 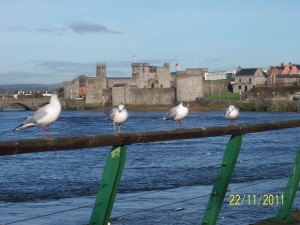 Back at Arthurs Quay - Full circle...

Down the steps by the lock to Arthur’s Quay –  named for a wealthy merchant shipping family in the city. In the 19th century they laid out streets that they named after members of the family Francis Street, Patrick Street and Ellen Street. Arthurs Quay Park is a beautiful riverside amenity – providing lunch time seating for workers on hot summer days, ice skating at Christmas, beautiful views of the river Shannon, and spectacular perches for seagulls!

The House of Industry, Paddy Lysaght