Tales from the Hearth – In Memory of Kevin McFadden

A couple of weeks ago I received a copy of a very special book entitled ‘Tales from the Hearth’ that has a delightful oral history of my part of Donegal. This book harks back to a time when people visited others houses to exchange stories by the fireside. I am not sure how or where I discovered this publication, but somehow I made contact with Helen who sent me her last copy of this beautiful little book of stories as recounted by her  husband, the late Kevin McFadden. 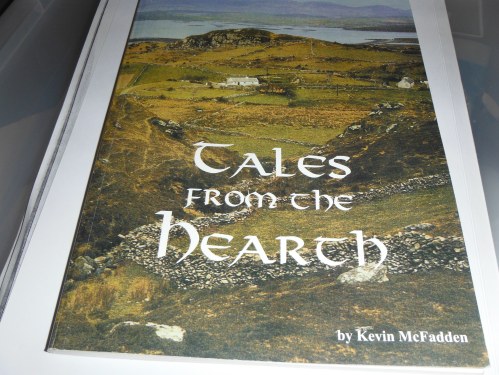 I grew up in Carrigart, County Donegal, Ireland, in days before television and when the electric lights went off at 10 pm.  On  summer evenings we stayed outside playing until we had to come in for bed, and in winter  we retreated  to the fire after dark. At about 7 pm ‘Spaceships Away’ resounded from the radio, heralding the beginning of the nightly series, Dan Dare, Pilot of the Future! My mother had a few special friends who on a regular basis, would  call to our house in the evenings. Younger children were sent to bed, we older ones helped with the sandwiches – how I loved to see her friends arriving as my mother made a special plate of her famous mouth-watering salad sandwiches, so yummy! (the secret ingredient was vinegar! ). Mrs McFadden, Kevin’s mother, called on a weekly basis, and I recall that she and my mother would exchange weekend newspapers, such as The Empire News, The Sunday Dispatch, The Sunday People and various others. These ‘British’ papers were crammed full of stories of the British Royals, as well as various scandals – the stuff of endless conversation in a quiet rural village! One of my abiding memories is of how they laughed and enjoyed one another’s company!  The McFadden Family lived near us.  Kevin and his brother Patrick  are the ‘stuff of legend’ in Carrigart! One night there was a terrific explosion, followed by total consternation. Patrick and Kevin had taken an oil drum and dropped a lighted match into it…. and  BOOM!  I still remember the bang and  that their hair and eyebrows were singed – they were very fortunate not to have been seriously injured!  I think this was sometime in the early 1960’s, and it remained a significant event in the village for decades!

‘Tales from the Hearth’ re-created these forgotten memories from the 1950’s and early 1960’s just by association. Not only that, the book itself has absolute gems of stories featuring many local characters, many of whom  I knew personally. Paddy ‘Long Barney’ –  have no idea where the ‘Long Barney’ came from  and of course we never thought to ask as these distinguishing nicknames were very common in Donegal, being used to distinguish between families of the same surname and very often, same first names.  Paddy Long Barney features in a most unlikely ghost story , full of the familiar local dialect, which is a joy to read!

My favourite story is about the local football team, The Mulroy All Stars who were provided with football strips by migrant workers to Scotland, the local McGroddy brothers, Johnny and his younger brother Andy. (Someplace in my photo-bank I have a picture of these two legends that I will post when and if I find it). The then 16-year-old Kevin was picked as goalie and proudly defended his goalmouth on The Lea just outside Carrigart,  resplendent in his yellow polo neck ‘rig’. Even the 11 goals that whizzed past his ear did not dent the great pride he had in turning out in fabulous new team colours! I will have great pleasure in showing this story to the sister of the McGroddy boys when I visit later in the year. 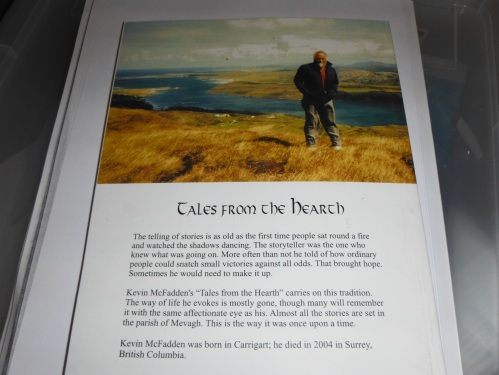 Kevin stands high above The Bar, where the Atlantic flows into Mulroy Bay, Co.Donegal

This little book is a great tribute to the local culture of story telling and yarn-spinning that was part and parcel of rural life in Ireland in the 1950’s and 1960’s. It is also a fitting memorial to a son of the parish who emigrated to Canada but never forgot his roots and the delights of the simple life he lived in rural north Donegal. Ar dheis Dé  go raibh a anam.

I am most grateful to Helen McFadden for sending me this book – I  will treasure it!