Titanic 100:We do not wish the memory of this calamity to be perpetuated

On April 8 1912, Francis Browne, a theology student studying for the Roman Catholic priesthood  left Dublin carrying a First Class ticket for the Southampton- Cherbourg- Queenstown (now Cobh) segments of the maiden voyage of the ‘unsinkable’ liner, the RMS Titanic.

Frank as he was known, was a seasoned  traveller – he had previously wandered across Europe courtesy of his uncle, Robert  Browne,who was the  Bishop of Cloyne. Uncle Robert had  given him a gift of a camera for the European trip, and Frank enjoyed  taking photographs of  a very high standard. The camera was again put to good use during those hours on board the Titanic. A wealthy family on board offered to pay Frank’s fare for the entire trip to New York, and he dutifully sought permission from his religious order, the Jesuits , to continue the voyage. Permission was denied and he was ordered to ‘get off that ship’. A fortuitous order  as it turned out, as not only did it probably save his own life, it meant that the pictures taken on board did not end up at the bottom of the Atlantic.

Early in 1913, Frank contacted the White Star Line looking for approval to use these  photographs and other materials for a series of illustrated lectures which he planned.  He received the following response

”We shall be glad to obtain photographs of the illustrations to which you allude in the Olympic booklet but shall appreciate it if in any lectures you deliver you will abstain from any reference to the Titanic as you will easily understand we do not wish the memory of this calamity to be perpetuated.”

Unperturbed, Browne set out on his  lecture tour  armed with the last pictures ever taken of  the mighty Titanic, with excellent shots of the interior, the crew, and passengers from First to  Steerage class, many of whom had perished.

Ordained in 1915, Fr Browne went on to become chaplain to the Irish Guards and served the dying at many of the bloodiest theatres of World war 1, including Messines Ridge, , Paschendale, Ypres.  Wounded several times and gassed, he went on to become the most decorated chaplain of the First World War, being awarded the Belgian Croix de Guerre (First Class) with palms and on two separate occasions, the Military Cross and bar.

This extraordinary man carried his camera everywhere and documented life everywhere he went – all over Ireland,  and including  Australia and England and other places across the world.  Some years after his death in 1960, a fellow Jesuit priest, Fr Eddie O’Donnell,  happened upon an old trunk with ‘Fr Browne’s Photographs’ written in chalk. It contained some 42,000 negatives, with  many in poor condition. The Jesuit order  arranged for the preservation of the negatives by Davison and Associates and they own copyright for all Fr Browne’s photographs. Fr O’Donnell is the curator of the collection and has published several volumes, listed below.

Photographs of the Titanic are much sought after by those interested in the tragic liner.  The photographs of the Harland & Wolff official photographer R J Welch taken during the construction phase  are  housed at the Ulster Folk and Transport Museum.

In 1985 the wreck of the Titanic was discovered on the seabed by Dr Robert Ballard and some 20,000 new images were taken. 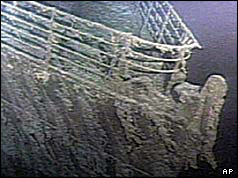 Image of Titanic lying at a depth of 2.5 miles, taken from unmanned submarine Argo in 1985. From the BBC

Now, to mark the centenary of the loss of the Titanic, National Geographic has produced some spectacular new colour images of the wreck. These can be viewed here.

Whilst  ghostly images of the rusting and mangled Titanic on the sea floor may  continue to become available with the development of new photographic techniques, it is the simple black and white ‘snaps’ taken on a relatively primitive box camera of Fr Francis Browne that tell the real story of the first and last voyage of the RMS Titanic, thereby ensuring that the memory of this calamity will indeed be perpetuated.

Some of Fr Browne’s photographs can be seen at the official website www.titanicphotographs.com.

The Titanic: A Night to Remember in Mayo 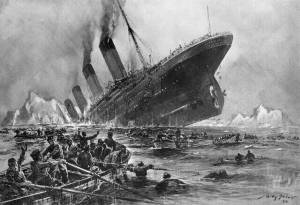 An artists impression of the Titanic Sinking. Image from commons.wikimedia.

On the afternoon of Thursday April 11th 1912, the RMS Titanic weighed anchor just off  Cobh – then Queenstown- County  Cork, Ireland, and set sail for America. On board were many people leaving Ireland in search of a better future. Included in their numbers were a group of 14 men and women from the County Mayo parish of Addergoole, on the shores of Lough Conn.

The weather was fine and the voyage went smoothly for the first few days. By Sunday April 14th, the Titanic had travelled some 1,400 miles and was east of New Foundland. Most passengers were asleep when, at 20 minutes before midnight, she struck an iceberg that ripped a 300 feet long gash in her side.

An eyewitness report :  ‘They called out three times in a loud voice:  ”Are there any more women before this boat goes?” And there was no answer. Mr Murdoch called out, and at that moment a female came up whom he did not recognize. Mr Ismay said: ”Come along, jump in.” She said: ”I am only a stewardess.” He said: ”Never mind – you are a woman; take your place.”

The ship began to list and was tilted steeply when the last boat containing 44 people was lowered at 2 am. Hundreds of people were still on the deck as the water got higher and higher. The ship’s orchestra played ‘Nearer My God to Thee’.  This is sometimes thought to be a romantic invention but, in a book of eyewitness accounts, several survivors and members of the crew attest to hearing the orchestra playing ‘Nearer my God to Thee’ as the lifeboats pulled away.

The stern  lifted out of the water and at 2.18 am the lights flickered and went out. By 2.20 am, the Titanic was almost perpendicular in the water and she slipped into the icy depths.  One eyewitness recounted: ‘After she reached an angle of 60 degrees, there was a rumbling sound, which he attributed to the boilers leaving their beds and crashing down. Finally she attained an absolute perpendicular position and then went slowly down’

An estimated 1,522 people lost their lives.

Included in their number were 11 of the hopeful emigrants from Addergoole:

Three of the women who had left Addergoole just days earlier were among the 700 who survived. They were  Annie Kate Kelly, Delia McDermott and Annie McGowan. 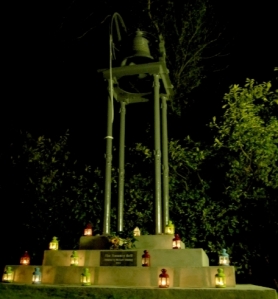 At Lahardane Church there is a bell that is used in an annual commemoration of the people from Addergoole  who were on the ill-fated Titanic. On the 15th of April each year between 2 am and 3 am, they remember their kinsfolk. At 2.20 am, the bell tolls  slowly in memory of those who were lost. The tolling is followed by jubilant ringing in celebration of the three lives saved in this terrible tragedy. Each year, in the still of the night, the bell’s lonely toll and joyful rings resound across the lonely landscape of Mayo.  It is then silent until the following year. Many of the bell ringers are family members of those who left their community 99 years ago.

This is a unique and very moving tribute to the lost members of this community, and to those who survived. The 15th of April is indeed their ‘Night to Remember’.

Beesley, L. Gracie, A. Lightoller,Bride, H,  1960. The Story of The Titanic as told by its survivors.   Jack Winocaur, Ed. Dover  Publications . Accessed at Google Books

Tagged as The Titanic, Titanic 100