On September 11, 2001, United Airlines Flight 93 departed Newark, New Jersey, one of the main New York airports, for San Francisco, California. It was 8:42 am. 37 passengers and 7 crew settled down for the almost 6-hour flight.  About three-quarters of an hour later, at around half past nine, 4 hijackers entered the cockpit and took control of the plane.

Aware that something was wrong, passengers and crew phoned family and friends on the ground and were told that passenger planes had been flown into the twin towers of the World Trade Centre at 8.46 am and 9.03 am.  A third plane was crashed into the Pentagon Building in Washington D.C. at 9.37 am. Realizing that their flight was in all probability being used for the same purpose, the passengers and crew of Flight 93 decided to take action.

The story of  Flight 93  has been dramatized in the film of the same name and is based on voice recordings and telephone calls made by the passengers and crew to their family and friends on the ground.

Passenger Todd Beamer in a telephone conversation with Lisa Jefferson told her that the passengers were going to try to take back control of the plane and according to Lisa, the last words she heard him say were “Are you guys ready? OK.  Let’s roll.”

It is thought that they planned on ramming the cockpit door with a service trolley. The last moments of Flight 93 are not known, but at 10.03 am it crashed with the loss of all on board. The intended destination of the hijackers is not known either, but it was possibly a building in the capital, Washington D.C, only 20 minutes away. The death toll for the awful, world-changing morning of 9/11 was 2,996,  which included the 19 hijackers of the 4 aircraft. Perhaps it may have been higher had Flight 93 reached the destination planned by the hijackers.

On September 9, 2001, I was at my desk in Dublin, Ireland, when at about 2 pm local time  I noticed a news item about a plane having crashed into the World Trade Centre. We turned on the office  TV and watched the incredible events unfold over the following few hours.

Seven years later, I was privileged to visit the site at Shanksville, Pennsylvania where Flight 93 crashed – a rural, remote and peaceful place.

Shanksville Memorial of the dead

At that time a  temporary memorial had been erected, the design of the permanent memorial not yet finalized. (Although still not fully completed, the first phase of the Flight 93 National Memorial was completed in time for the 10th anniversary in 2011 and can be seen here.) Even as a temporary memorial, this was a special place, with an eerie silence in spite of the number of visitors.

The location is very rural with little signs of habitation, although there are buildings quite nearby on the other side of the hill. One of the images that has remained with me is of the eyewitness descriptions from workers close by. They told of the plane flying upside down, so low that they ‘could almost count the rivets’,  how it disappeared over the hill, and, moments later – silence  – followed by huge explosions. 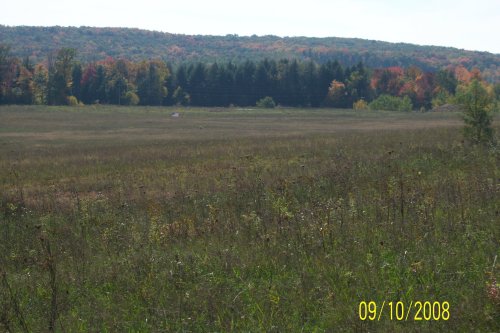 The scene of the impact where Flight 93 crashed into the ground.

All on board were incinerated as the thousands of gallons of fuel ignited in a huge fireball. The flight recorders were recovered from some 25 feet below ground, but no human remains were recovered. It was possible however to confirm the identities of all 44 persons using DNA  matching.

Another view of the site of impact

At the time of my visit, a depression in the ground was the only sign that anything had happened here. Such was the extent of the explosion, debris was spread over an area of about 8 square miles and the largest piece of metal recovered was only 2 feet long. 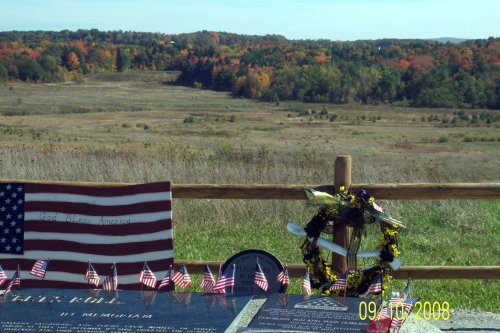 There was a stillness about the place that defied the horror of the violence that happened here. Hundreds of acres were scorched by the fireball, and the surrounding trees burned for several hours. 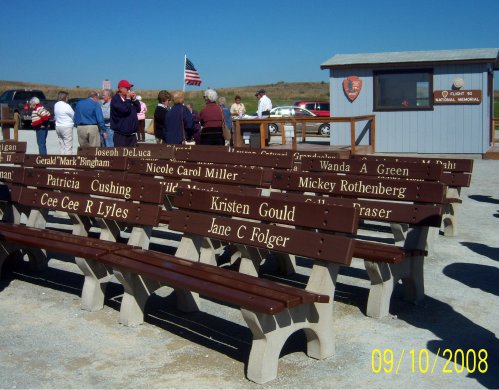 Benches bearing names of the dead

The temporary memorial had seats bearing the names of the passengers and crew.

A Park Ranger in attendance was able to answer any questions and a book containing some key point details of the events on board Flight 93 was available to read.

Relatives and friends leave mementos such as flag s, caps, messages, jewellery and flowers on a 40-foot memorial ‘wall’.

Some of the items left at the wall

At the time of my visit in October 2008, over a million people had made the pilgrimage to this site to remember those who are seen as having given their lives to save others. The 40 passengers and crew on Flight 93 are generally regarded as national heroes.

There were 40 wooden angels, one for each of the victims, and a large cross near the perimeter of the memorial which was located about 500 yards from the crash site which is known as the ‘Sacred Ground’.

A photograph and short bio of each of the 40 victims can be seen here.

As the 12th anniversary of 9/11 will be on Wednesday of this week, I thought that my pictorial record of the temporary memorial  from 2008 would be an appropriate commemoration of all those who lost their lives on that fateful day, and most especially to the 40 people on Flight 93 who perished  in a field in Shanksville, Pennsylvania.

I am grateful to Jane and Bob Noren, my hosts during my visit to the USA in 2008, and in particular to Jane who drove with me to see this very special place.

Filed under My Oral History, My Travels, Significant World Events