The anniversary of the birth of William Smith O’Brien, Young Irelander, is an appropriate time to record his strong association with the area in which I live in County Limerick, Ireland.

William O’Brien was born on 17 October 18o3, second son to Sir Edward O’Brien, Baron Inchiquin of Dromoland Castle, Member of Parliament for Ennis, County Clare and Charlotte Smith, daughter of  the wealthy William Smith, an attorney,of Newcastle West, County Limerick. The O’Briens had accumulated large debts and the marriage to a wealthy Smith was a fortuitous one. Cahermoyle House, in Ardagh, Co Limerick was a property acquired by William Smith. William O’Brien (as he then was) inherited Cahermoyle House and lands of about 5,000 acres from his grandfather William Smith, and in honour of his grandfather, he adopted his name and from now on became known as William Smith O’Brien.

William Smith O’Brien followed in his father’s footsteps and entered politics, becoming conservative member of Parliament for Ennis from 1828 to 1831, but gave  it up on his marriage to Lucy Gabbett  from Limerick  in 1832.  The newly weds decided to make Cahermoyle House their home. Their marriage was a happy one and they had 7 children. William returned to politics and became Member of Parliament for Limerick County from 1835 to 1848.

At the House of Commons, Smith O’Brien vociferously highlighted  the suffering of the  people of Ireland, calling for better government and an end to Catholic discrimination. (The Famine was raging in Ireland between 1845 & 1852). He worked for Famine Relief Schemes and was Chairman of the Newcastle West Board of Guardians. 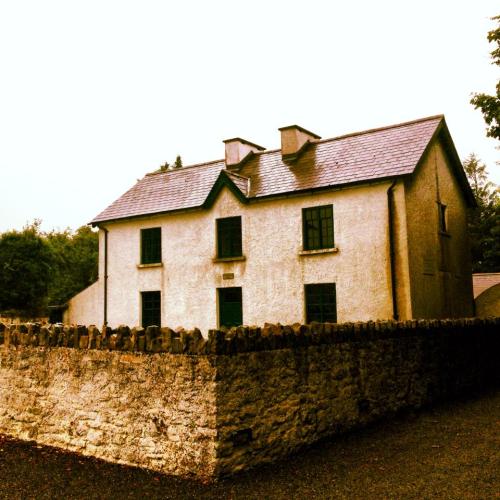 He joined the Young Ireland Movement, and was arrested for ‘seditious conspiracy’ in 1848. Whilst on bail, he led the failed Rebellion at Ballingarry Co Tipperary later in 1848 and was arrested at Thurles  Railway Station when making  his way back to Cahermoyle. Smith O’Brien with Terence McManus, Patrick O’Donohoe and Thomas Francis Meagher were charged with  high treason and  on 9 October 1948 they were sentenced to death. A petition for clemency was raised, and contained 80,000 signatures. The sentences were commuted to transportation for life and on 9 July 1849 the Young Irelanders were transported to Van Diemen’s Land on board ‘The Swift’ 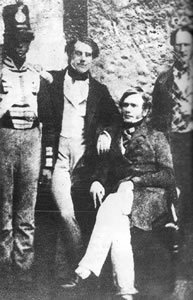 In 1854, O’Brien was pardoned and returned to Europe, but it was not until 1856 that he was permitted to return to Ireland and Cahermoyle, and to his much loved wife. Lucy died in 1861 and William was said to have been distraught. On 18 June 1864, William Smith O’Brien died whilst travelling  in Bangor, North Wales. News of his death was reported across the world. His body was brought by ship from Wales to Dublin, arriving at the quayside in the very early hours of the morning.

The Sydney Morning Herald on 15 August reported on the funeral:

”The remains of the deceased arrived on the morning of the 23rd, at the North Wall, in the City of Dublin. About 2,000 persons were present to receive the remains. A hearse was in attendance,and as soon as the coffin was conveyed on shore it was borne towards the hearse in order to be conveyed to the Great Southern and Western Railway, en route to Cahermoyle, Limerick, but the people shouted, unanimously that it should be carried to the railway, and all efforts to take it to the hearse were unavailing. A procession  was formed, and the coffin was borne on the shoulders of six men to the railway, by way of the Royal Canal and the principal streets. The green flag was waved over the remains before the train started for Cahermoyle.”

The body was transported by road from Limerick railway station,to repose at Cahermoyle before the funeral to the church at Rathronan, where the family worshipped. The vast funeral procession comprised a large number of gentry, some 20 catholic priests and hundreds of tenants, many mounted. It is said that the hearse had reached the church while the rear was still leaving Cahermoyle, some 2 miles away.

The entrance to Cahermoyle House

Cahermoyle has been extended since Smith O’Brien’s time 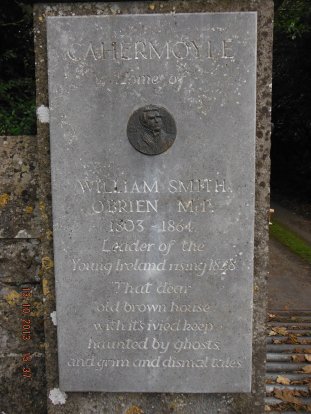 A plaque atthe gate. I have been unable to source the quotation referencing the ‘brown house’

Cahermoyle House is now a Nursing Home, having previously been a catholic novitiate for the Oblate Fathers who had bought the house from the Smith O’Briens.  It has been renovated and extended for its new incarnations, yet still remains and imposing and beautiful house. It has a particular link to my family as my mother spent her final 6 weeks there as a patient in 1999 and in 2006 my father died in the house, while in respite care. Both of them made their final journeys down the long avenue and through these gates.

On Sunday last, having read about the extraordinary reception of the coffin at the Dublin docks and the crowds that thronged the funeral, I went to the small graveyard at Rathronan, just about a mile from where I live. The now derelict church is a short distance off the main road, up a single track. The graveyard gate squeaked as I opened it,warning all those within that someone was coming! The peace of an early autumn Sunday afternoon was enhanced by a solitary bird singing high up in the trees, otherwise the silence was total. 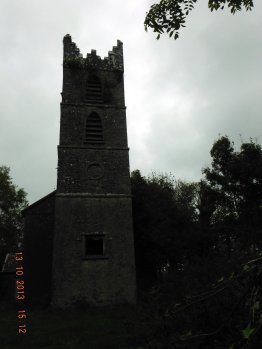 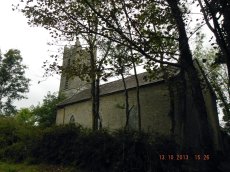 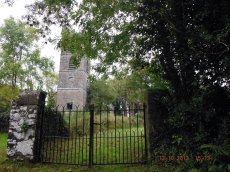 The Smith O’Brien family mausoleum  is an imposing and  beautiful structure in this small graveyard. There are very few headstones here, in this exquisitely peaceful setting. The mausoleum was erected by Smith O’Brien’s son some two years after his father’s death. The door was open, but I did not venture in, and instead sat a while on the plinth thinking of the man  and his family who rested inside. A great Irishman, a man of peace,an international figure of renown who sacrificed much for the people of Ireland and for a poor and downtrodden people of a religion not his own. 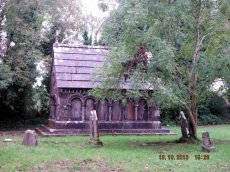 The Mausoleum is to one side of this small churchyard

Detail from the very ornate mausoleum 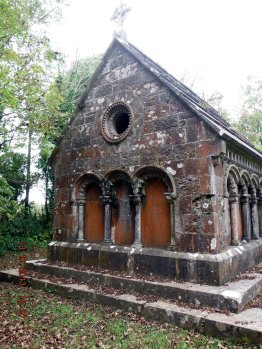 The names of the family who lie here are inscribed on panels, some quite difficult to read

The lonely little churchyard does not have many graves 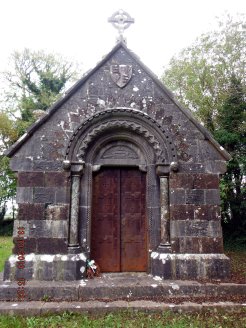 The Family crest above the door. The family Motto is Is laidir an lamh in uachtair’ (The heavy hand is uppermost)

This post is not an historic review of the life of William Smith O’Brien, but rather a  personal journey from his home to his final resting place. I am most grateful to a local historian Mr John Hough, author of ‘William Smith O’Brien – the unlikely Revolutionary’ for giving me a copy of his excellently researched and written  pamphlet which records and recounts the events of the extraordinary life of this man of integrity and principle.

There is a statue of William Smith O’Brien in O’Connell Street, Dublin. originally erected at the junction of Sackville and D’Olier Streets in 1867, it was  relocated to O’Connell Street  in 1929.  This monument to this extraordinary Irishman  was the first statue erected in Dublin to commemorate an individual who had stood for armed resistance to British rule. 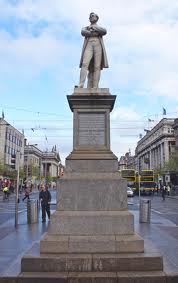 *** I am grateful to Kasia Gmerek for  the following information by email:

The poem engraved there was The House, written by Charlotte Grace O’Brien’ William’s
daughter, and can be found in the volume published by her nephew Stephen Gwynn, see
here a digitized copy of the book: