I was thrilled and honoured to have been nominated  for the Grafton Media Blog Awards Ireland 2012 some time ago. Having read  some of the incredibly excellent work of others in the long list, it was clear that the opposition was formidable and the standard very high… It came as a huge surprise then  to learn that this  blog has been shortlisted in the Best Lifestyle Blog category! 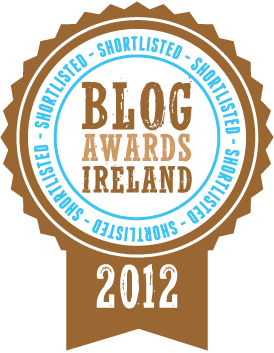 The business of blogging is alive and well in Ireland; hundreds of bloggers are putting their all into their posts. The categories have attracted entries from a broad range of people – from primary school children right up to professional journalists; from craft workers to fashionistas, from cooks to gardeners, from music buffs to photographers, and everything in between!   Well done to the organizers for taking on the task of sifting through the many entries and to Grafton Media for being the main sponsor.  Such efforts encourage and promote the use of the internet by people from all walks of life and from every profession and I am all for that!

I would like to send special wishes to Seamus, author of  Eclectic Sound Bytes deservedly shortlisted in the Best Music Blog category – this blog is for  real music followers and can be seen at www.eclecticsoundbytes.blogspot.com

Every single nominee is a winner!  The very best of good luck to all on the shortlist!

The Famine Diaspora. What became of them? Many who went to the United States of America fought on both sides of the American Civil War. Many suffered terrible wounds. Many died. In the USA Civil War veterans are remembered with pride and all things Civil War have enormous tourist potential. Isn’t it time that we Irish acknowledge the contribution our starving ancestors made to the formation of America? Isn’t it time that we Irish acknowledge the tourism potential in having memorials to this part of our very proud history? For an academic ‘take’ on it, read Damian’s recent blog post above.

Irish in the American Civil War

The Great Famine is an event seared into Irish national memory. Although the victims of the Great Hunger are rightfully remembered and commemorated, as is the physical fact that vast numbers of people were forced to leave, Ireland today largely leaves the memory of these emigrants at the dock, as they boarded ships to a new life far from home. Preserving the memory and experiences of emigrants once they arrived in their new countries has for the most part been left to their own descendants, despite the broader pride that Ireland takes in her global diaspora.

Perhaps the most stark example of this is the way Ireland views the American Civil War. At the commencement of that conflict 1.6 million Irish-born people lived in the United States, the vast majority having arrived as a direct consequence of the Famine. In New York City, which in 1860 had a population of 793,186, a…

A bit of Craic in Croagh, County Limerick!

Every working day I travel the N21 passing by the village of Croagh, County Limerick. In recent months I have been intrigued by a very handsome solitary capped figure sitting on a bench on a side road just off the main road. Very realistic, it took a few days for me to realize that Croagh Man is not real!

Imagine my astonishment last week to find that he was kitted out in black tie, dress shirt and  had a bride by his side! No ordinary woman this – this is a genuine authentic dumb blonde with straw hair! 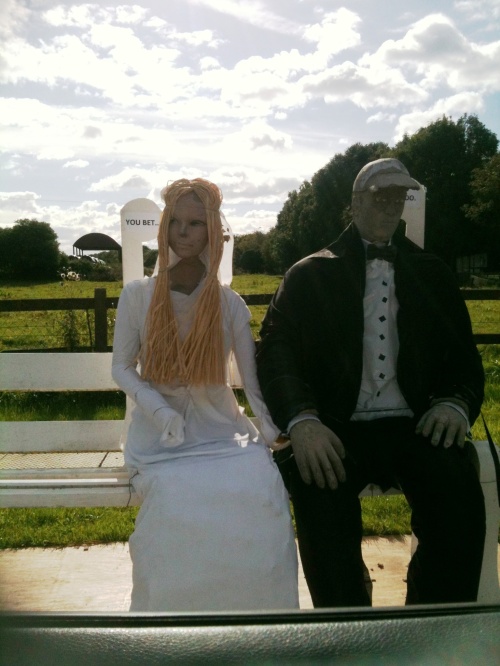 Today I was equally astonished to find that Bride of Croagh Man had vanished!

The creator/artist happened along on his ride-on mower – this was Tom who had created Croagh Man and who mows the grass and verges in Croagh for ‘something to do ‘ in his retirement. The bride was placed in celebration of a local wedding that took place between neighbours in recent days. Now alone again, Croagh Man, comfortably back in his working clothes, was undergoing repairs to cover a gash in his thigh (it is to be hoped that the new bride did not inflict this injury in an attempt to defend herself from unwanted advances!)

Tom is doing great community work in is spare time and has provided visual enjoyment for the likes of me who whizz by a couple of times a day on otherwise mundane days!  Thanks Tom! Thanks for the smiles!  (he did not give his surname!)

Filed under Living in Ireland

This Irish Times article from Fintan O’Toole’s  excellent ‘A History of Ireland in 100 Objects ‘ series, links back very nicely to my recent post on Knockfierna, County Limerick and the remnants of the Famine Village there. Click to read about the importance of this pot in Irish households. http://www.irishtimes.com/newspaper/weekend/2012/0901/1224323426718.html

A history of Ireland in 100 objects.